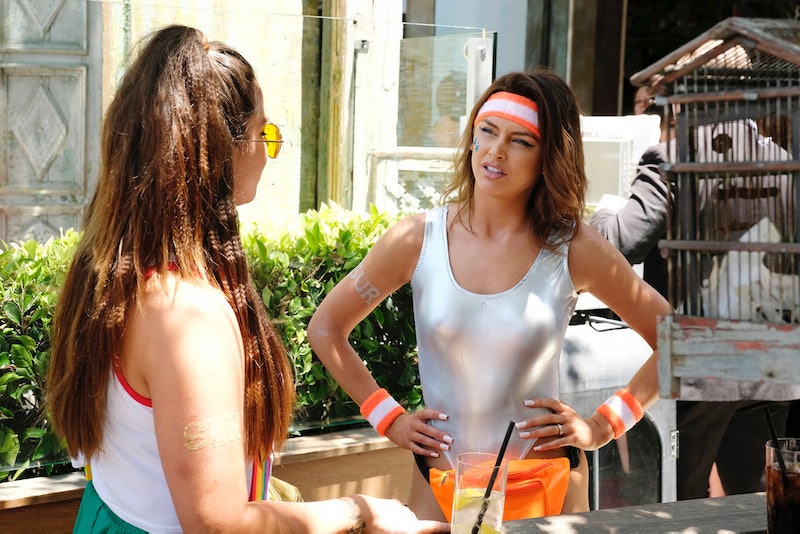 Being on reality TV means having to put your personal life on full display... whether you want to or not. Though Vanderpump Rules star Lala Kent was initially reluctant to talk about her "man," as she calls him, on camera, she eventually began sharing details about her relationship with Randall Emmett. And it looks like she'll be really opening up in the coming weeks. In a preview for the next episode, Lala reveals she and Randall took a break. It's unclear why they decided to take some time apart, but whatever the issue was, they must have worked through it.

In the beginning of their relationship, Lala only called Rand her "man" because he was going through a divorce, and she wanted him to be able to process it privately. When his divorce was finalized, Rand was more publicly announced to the rest of the group, and Lala and he were happy. But throughout Season 7 of Vanderpump Rules, there have been hints of trouble in paradise, the first being that Lala admitted that she and Rand had been drinking too much and that they had to cool it down. After they got so wasted that Lala was able to break a hurricane-proof window, they both had a talk and said it would be better if they slowed down on the alcohol. It was a responsible decision, and Lala seemed to be taking it seriously, so what happened to push them apart?

After some internet sleuthing, it doesn't seem like Lala has spoken publicly about why she and Rand took a break, but she did talk about how hard it was to be with him in the beginning, especially because she was labeled a gold digger. As she told Cosmopolitan in December 2018:

"That will go down as one of the toughest times in my entire life. I was just so madly in love with this person, and it was so different from anyone I had ever dated before, and so my feelings got hurt when people spoke about the money aspect, because that's never really been my type of personality to go for such shallow things."

Relationships are difficult enough without people calling you names, so perhaps the stress of being repeatedly maligned in public was enough to send Lala running for the hills — if temporarily. Luckily, whatever happened between Lala and Rand must have been short-lived, because they're now engaged and planning what must be a truly spectacular wedding.

Of their engagement, Lala wrote on Instagram, “An engagement last night, my birthday today, and every sign my dad could possibly send me to let me know he's here. I'm the happiest girl in the world!" According to Page Six, Rand asked Lala's late father for permission to propose, which made the event even more bittersweet (her dad passed away in 2018).

Clearly, whatever happened between Lala and Rand is settled and they are living happily ever after. The full drama will reveal itself on Vanderpump Rules soon enough, and maybe we'll even get to see their wedding, too.