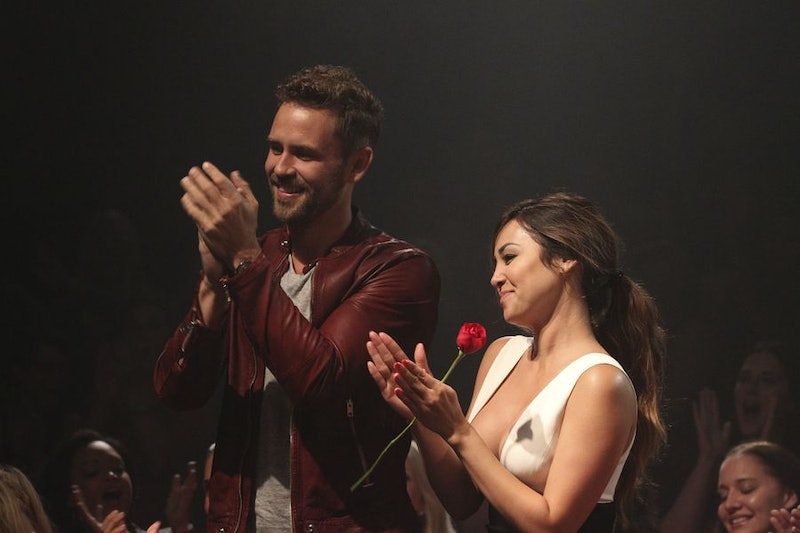 It's hard to believe that The Bachelor is giving us two two-on-one dates this season — especially two episodes in a row! — but it happened. On Monday night's episode, Danielle L. and Whitney headed out on a date with Nick in St. Thomas, and surprisingly enough, by the time the date was over, both of them were headed home. But since Danielle's been such a fan favorite all this time and seemed to have been getting along with Nick so well, I couldn't believe that she got eliminated, too. Why did Nick send Danielle L. home on The Bachelor?

At first, it seemed like Danielle was really safe. She and Nick had a good conversation about where their relationship was headed, and immediately afterward, he headed to see Whitney to let her know that he wouldn't be giving her the rose this time. She got dramatically left behind on the beach as Nick got into the helicopter with Danielle, and it seemed like it was a done deal. But it wasn't, because this is The Bachelor, and why would it ever be that easy?

They had a nice dinner together and talked about how quickly they managed to connect, and it seemed like all was going well... and then, suddenly, it wasn't.

After Danielle got super honest about how into him she is, you could see Nick starting to internally freak out, and then, it all came out. He admitted he doesn't feel the same way about Danielle that she feels about him, and it was both really awkward and sad to witness. Nick obviously wasn't 100 percent sure that he should be sending Danielle home, but he did, and Danielle was heartbroken — who wouldn't be after getting rejected like that?

Here's hoping Nick didn't make a mistake and that this will help him figure out who he's meant to give that final rose to in a few weeks. Danielle will find someone awesome out there. She's a catch!