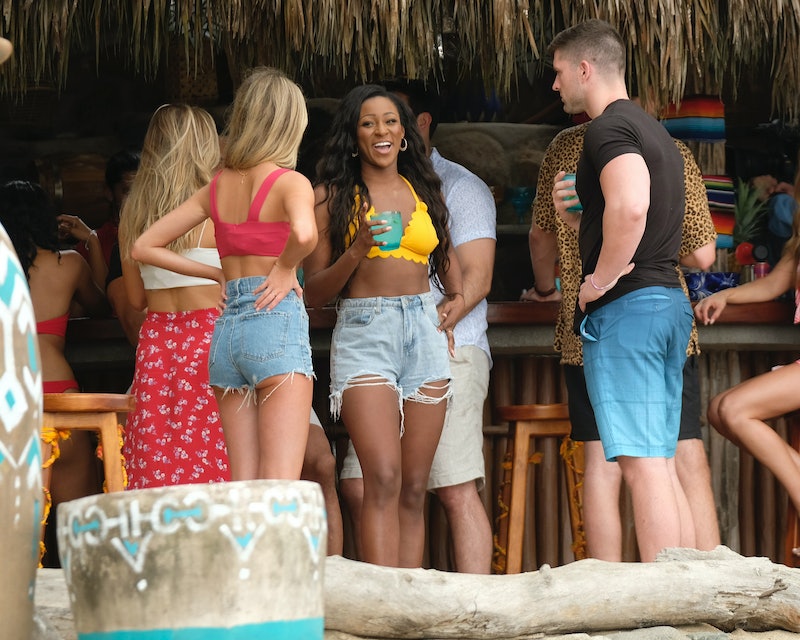 There have been a lot of "most shocking" moments on Season 6 of Bachelor in Paradise, and Onyeka leaving voluntarily is only the latest one. She went to Mexico looking to genuinely connect with someone on a personal, emotional level, and when she had the power of awarding a rose, she felt as though that connection didn't exist with anyone.

She definitely had eyes for Mike when he arrived and called him a total stud. Unfortunately, though, sparks didn't fly between them. He had eyes for Caelynn, and they went on a date, but their chemistry pretty much fizzled when Dean and his mustache strutted in. Cam, going into the ceremony, was convinced that he had an "ally" in Oneyka — but giving him a rose just to stick around on the beach wouldn't be fair to either one of them. Almost as soon as the rose ceremony started, Oneyka came forward and said that she had been pretty "unhappy" on the beach so far and just wasn't feeling a connection with anyone. In tears, she said her goodbyes, packed up and left.

“I know I’m an awesome person, why don’t the guys think I”m awesome," she said to the camera. "Anyone here that’s interested in me, please let me know." Her tone started out as kind of light-hearted and joking, but it quickly escalated into emotional. She mentioned two of the guys fighting over Nicole. “It makes me feel super envious because I wish someone would make me feel that special," she said.

She went on to the rose ceremony, and before it began, she stopped Chris Harrison's normal speech. “Chris, can I say something really quick?" she asked. "I came here with the highest expectations. I really wanted to meet someone here ... I can’t give out a rose to anyone tonight," she said. "And I’m really sorry."

But she didn't leave Paradise empty-hearted. She thanked everyone — guys and girls — for their close friendship and gave out tearful hugs before her departure.

You might be wondering why she didn't hang around to see what the rest of Paradise and new arrivals could potentially offer, but sometimes, you just have to go with your gut. According to an interview she did with Glamour, she said she knows she'll be sure of it when she finds the one, although she's never been in love before. She said she's very picky.

"I want to be with someone because it’s what I want and I feel it. I know that when I’m in love with someone, I’ll know it," she said. "It’s kind of like an orgasm." And for her, Paradise didn't hit the right spot — this time around, at least. As proved by Chris Bukowski, Jordan Kimball, and others, Paradise accepts return visitors. And if she doesn't find anyone by the time Season 7 comes around, fans could very likely find her in Mexico once again. But for now, props to her for knowing what she wants and deserves.