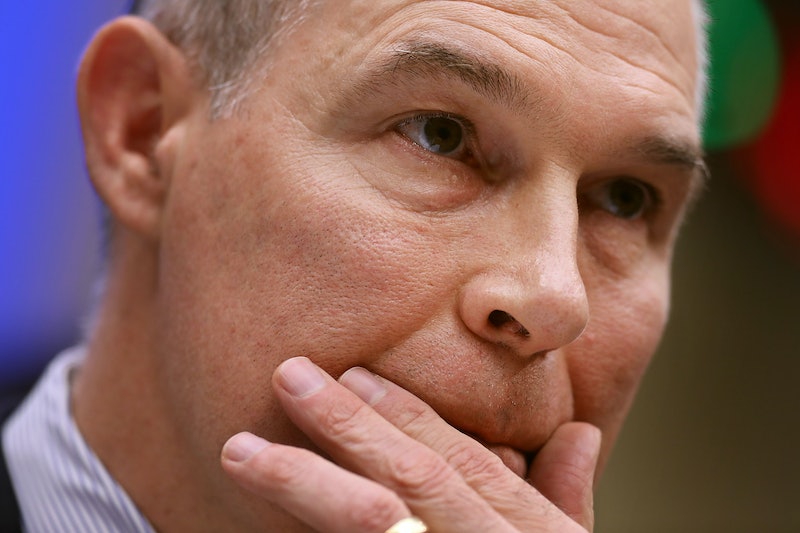 This year's Fourth of July holiday is apparently ending with something of a bang within the Trump administration. President Donald Trump announced Thursday that he had accepted the resignation of Environmental Protection Agency Administrator Scott Pruitt. Deputy EPA Administrator Andrew Wheeler will replace Pruitt as acting administrator, Trump said.

"I have accepted the resignation of Scott Pruitt as the Administrator of the Environmental Protection Agency," President Trump tweeted Thursday. "Within the Agency Scott has done an outstanding job, and I will always be thankful to him for this."

In his resignation letter, Pruitt told Trump it was "extremely difficult" for him to step down but that "attacks" on him had taken their toll. "It is extremely difficult for me to cease serving you in this role first because I count it a blessing to be serving you in any capacity, but also, because of the transformative work that is occurring," Pruitt wrote. "However, the unrelenting attacks on me personally, my family, are unprecedented and have taken a sizable toll on all of us."

Pruitt's tenure at the EPA has been plagued by scandal and controversy as allegations regarding his spending habits and potential ethics violations prompted multiple investigations into him and his EPA. According to the Economist, Pruitt faces at least 13 federal investigations, including inquiries into his purchase of a $43,000 soundproof telephone booth, his $50-a night lease in a high-priced condominium linked to an energy lobbyist, as well as allegations he'd retaliated against EPA employees who questioned him and sought to leverage his position within the Trump administration to obtain special favors for his family.

Pruitt has also faced extensive criticism for his travel costs, with the New York Times reporting he'd once accepted a trip to Morocco arranged by a lobbyist and often ordered his staff to "find me something to do" in Oklahoma so he could use taxpayer money to travel to the home he owns there.

Earlier this year, an investigation into Pruitt's leadership at the EPA led by House Oversight Committee Chairman Rep. Trey Gowdy overturned allegations that Pruitt had ordered a top EPA aide to perform tasks better suited to a personal assistant, such as assisting him in renting an apartment and purchasing a used mattress from a Trump hotel. As the number of investigations against Pruitt increased, so to did the number of EPA staffers and aides submitting their resignation.

But it wasn't just Pruitt's spending habits that engulfed the soon-to-be former EPA head in controversy. A vocal questioner of climate change science, Pruitt rolled back a number of Obama-era regulations aimed at curbing vehicular and power plant emissions and urged President Trump to withdraw the United States from the 2015 Paris Climate Accord while serving as EPA administrator.

With the number of investigations into his activities mounting, the White House admitted President Trump was finally looking into the "troublesome reports" about Pruitt earlier this week. "The president feels, though, [that] Scott Pruitt has done a really good job of deregulating the government to allow for a thriving economy," Reuters reported White House spokesperson Hogan Gidley told reporters traveling with the president aboard Air Force One on July 3. "That's important to him."

According to President Trump, Pruitt's role will be filled by the EPA's deputy administrator. "The Senate confirmed Deputy at EPA, Andrew Wheeler, will on Monday assume duties as the acting Administrator of the EPA," Trump tweeted Thursday. "I have no doubt that Andy will continue on with our great and lasting EPA agenda. We have made tremendous progress and the future of the EPA is very bright!"