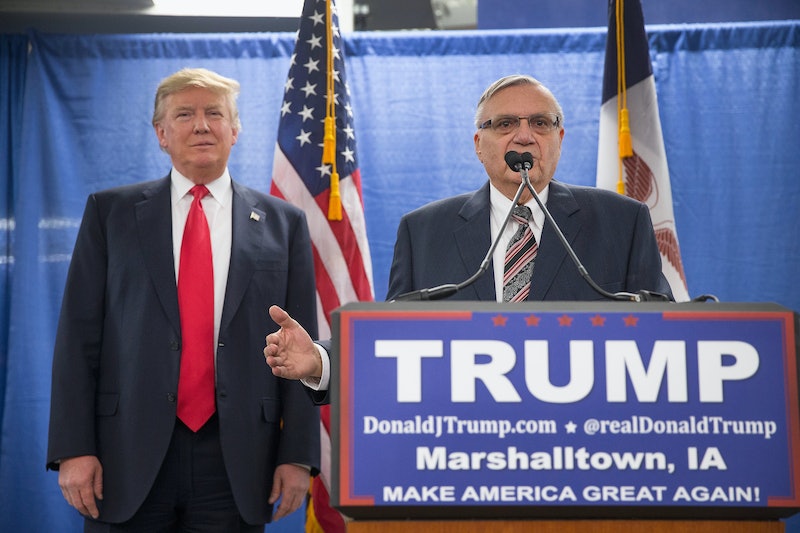 As Hurricane Harvey approached the Texas coast on Friday evening, the White House announced that President Trump has pardoned Joe Arpaio, the controversial former sheriff convicted of criminal contempt in July. In a press release, the White House said that "after fifty years of admirable service to our nation, [Arpaio] is a worthy candidate for a presidential pardon." Arpaio endorsed Trump during the campaign, and is the first person pardoned by the 45th president.

"Arpaio's life and career, which began at the age of 18 when he enlisted in the military after the outbreak of the Korean war, exemplify selfless public service," the White House statement says. "Throughout his time as Sheriff, Arpaio continued his life's work of protecting the public from the scourges of crime and illegal immigration. Sheriff Joe Arpaio is now eight-five years old, and after more than fifty years of admirable service to our nation, he is a worthy candidate for a Presidential pardon."

In 2013, Arpaio was found guilty of violating the constitutional rights of Latinx residents of his county by targeting them during traffic stops and raids. In July, he was convicted of criminal contempt for refusing to follow a court order intended to end those abuses.

The president's announcement did not come as a surprise. At a campaign rally in Phoenix on Tuesday, Trump strongly hinted that he would pardon Arpaio, explaining that the former sheriff is "gonna be just fine."

"I won't do it tonight because I don't want to cause any controversy," Trump said on Tuesday. He did not specify what he meant by "do it," but the context of his remarks implied that he was talking about giving Arpaio a pardon.

Like Trump, Arpaio built a political name for himself by questioning Barack Obama's birthplace and eligibility to be president. In 2011, he assembled a team of investigators, which he named the "Cold Case Posse," and tasked them with determining whether or not Obama's birth certificate was fabricated. In 2017, Arpaio's successor Paul Penzone disbanded the posse after it failed to uncover anything significant.

Arpaio was also criticized for mishandling sex abuse cases during his tenure as sheriff. According to the New York Times, Arpaio and his deputies failed to investigate or only conducted cursory investigations of over 400 sex crime allegations between 2005 and 2007. One woman told the Times that she had tried multiple times without success to get Arpaio's office to investigate a man she accused of molesting her three daughters. In response, Arpaio said that "if there were any victims, I apologize to those victims."

Trump himself has not yet commented on his decision to pardon Arpaio.