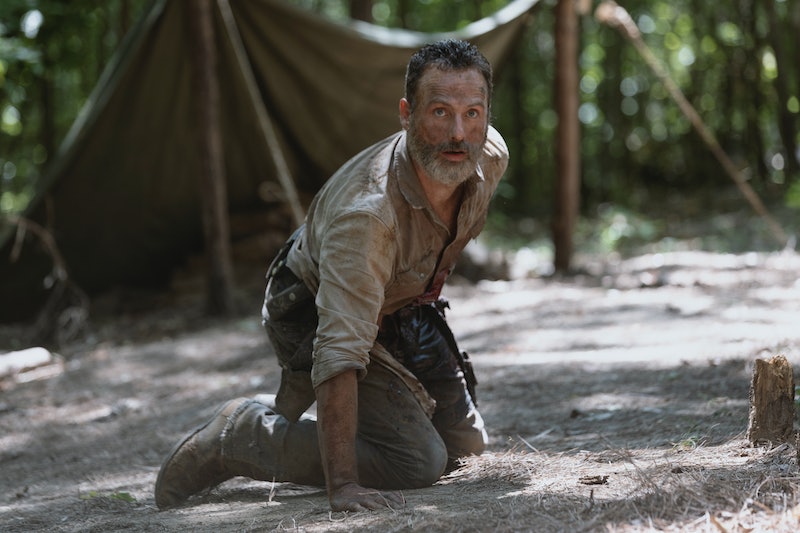 Sunday night's episode of The Walking Dead brought several beloved characters back to life — not in the gross zombie way either. While bleeding out and trying his best to outrun a horde of hungry walkers, Rick started having hallucinations about several deceased people in his life, which included Shane, Hershel, and Sasha. But as great as these mini-reunions were, fans couldn't help wondering why Carl and Lori weren't in Rick's final Walking Dead episode when so many others were resurrected (pun intended) for Andrew Lincoln's departure.

After all, wouldn't they be the first people to pop into Rick's head during what he thought would be his final moments on Earth? Carl especially has served as such a driving force for everything Rick has done throughout the years. Every decision Rick made and every course of action he took was to make the future better for his son — to give him a better life than the one they were currently stuck in. So why exclude him from seeing his father once more when a perfect opportunity like this arose? From a pure fan standpoint, it felt like a complete and total oversight that left many scratching their heads by the end of the hour.

However, as perplexing as the decision may seem to viewers, showrunner Angela Kang shared her reasoning to HuffPost about why these two pivotal characters were suspiciously MIA for the special occasion. "We dove into this idea of the 'third man phenomenon,'" Kang told the outlet, adding:

"When people are close to death, sometimes they imagine seeing somebody that they knew or that they don't know that helped drive them to survive and keep them going. We had these three particular characters [Shane, Hershel and Sasha] who are sort of filling an emotional need for him in the moment, but Rick’s entire journey is looking for his family, and I felt, creatively felt, that if he sees Lori or Carl, he would feel like, 'OK, I fulfilled my mission. I found them. I'm home. I can lay down and die now.'"

Throughout the episode, Rick was constantly mumbling that he needed to get to his family, which is a large part of what kept him going throughout all the pain and suffering he felt at the time. Kang went on to explain:

"He needed to keep going for the family that is still there, and so to have that kind of restlessness of like, 'I still haven't found them. Where are they? Where are they?' bringing him back to realizing his family has always been there all along. That the people he's fighting for now are still his family ― that's what keeps him going. So he can't find them, otherwise it'd be too easy for him to give up."

In a way, that makes sense given Rick's search for his family was the main thing that kept snapping him back into consciousness, but at the same time, it's hard to believe that Sasha would rank higher than Carl when it comes to subconscious visits from beyond the grave. Regardless, hopefully this explanation will help to provide fans with some closure about Rick's farewell episode and why a few choice characters were left dead and buried, so to speak.

More like this
Nicola Coughlan Shared A Lady Whistledown Excerpt From ‘Bridgerton’ Season 3
By Grace Wehniainen, Alyssa Lapid and Sam Ramsden
'House of The Dragon' Episode 6 Will Take Place A Decade After Episode 5
By Kadin Burnett
Netflix Reveals First Look At Wednesday In The 'Addams Family' Spinoff Series
By Bustle Editors
A New 'And Just Like That' Table Read Pic Confirms A Key Character's Return
By Jack Irvin and Grace Wehniainen
Get Even More From Bustle — Sign Up For The Newsletter