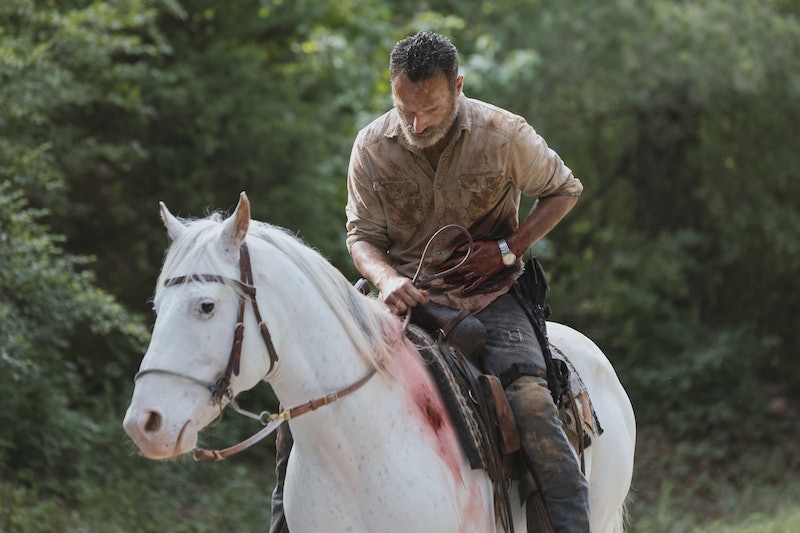 Rick Grimes' final episode of The Walking Dead had an homage to the pilot that introduced the world to the post-apocalyptic hero, closure, heartbreak, and an unexpected dash of hope for the future of this character in this ever-expanding world. Surprise, y'all: Rick didn't die on The Walking Dead, but exactly where he's headed on that helicopter is still totally unknown. It's really a lot to process, so let's start from the top.

After falling from his horse and being impaled in the middle of a road last week, Rick was bleeding out for most of this episode, and passed out multiple times. Every time Rick drifted towards death, he had a vision of a fallen friend — first Shane, then Hershel, then Sasha. It was a beautiful send off for fans, giving some closure to his character in this part of the Walking Dead universe. But after all of that nostalgic "final episode stuff," Rick blew up his beloved bridge in order to protect Alexandria and the remaining outposts from a herd of walkers. It looked like he blew himself up, too, and it would have been an epic ending to Rick's story line. Of course this guy would rather die than see a bunch of walkers take out his bridge and the communities he worked so hard to build, right? Classic Rick.

But that's not what happened. In the very final minutes of the episode, viewers see that Rick has just been catapulted to safety on a nearby hill, hurt, but alive, even though Daryl, Michonne, Maggie and the rest of the survivors seem to believe that he's dead.

While Rick's friends (and, TBH, fans at home) mourned in shock, a nearby Anne discovered his body and took him away in a helicopter. She referred to him as a "B," telling her contact that she never had an "A" to give to them. This was the same code she used when she knocked out Gabriel earlier this season. Given that Rick is still alive, everyone thinks he's dead, and that this is definitely Andrew Lincoln's final episode on the AMC series for now, what does this all mean? Where is Rick Grimes going?

Well, here's the thing. While Lincoln is definitely leaving the series for now, he's not gone from our screens according to statements from the showrunner just after the episode aired. On The Talking Dead, Scott Gimple announced that a series of AMC original films will continue the story of Rick with Lincoln — which should explain where the helicopter took him and Anne/Jadis. So, the Walking Dead Cinematic Universe is officially upon us now. In an official press release from AMC following Rick's final episode, Gimple additionally said this:

“These films are going to be big evolutions of what we’ve been doing on the show, with the scope and scale of features. We’re starting with the first part of the continuing story of Rick Grimes, and there is much more on the way, featuring yet-unseen worlds of The Walking Dead and faces from the show’s past, as well as new characters we hope to become favorites, told by TWD veterans and emerging voices. We want to break new ground with different, distinct stories, all part of the same world that’s captured our imagination for nearly a decade of the Dead.”

Also on The Talking Dead, a newly free and ready to spoil Lincoln dished to Yvette Nicole Brown that this ending was in the cards for last season. Remember those scenes of Rick bleeding out under a tree that we kept seeing? He was supposed to be whisked away by a helicopter, near death, at that point, but Lincoln wasn't ready, which means a lot of love went into these past few episodes building up to his inevitable departure. Lincoln also revealed earlier this year that he would be returning to direct some upcoming episodes. It's clear he loves this TWD world a lot.

As for the original series, so much is about to happen. The story is jumping forward years, now. New survivors are coming. The Whisperers are coming. Judith has a gun and is all grown up! Rick Grimes may be gone, but there are a ton of juicy-looking stories and developments coming up on The Walking Dead that should more than tide us over while we wait to find out who whisked the sheriff away and what everyone is going to do in the wake of his sudden departure.