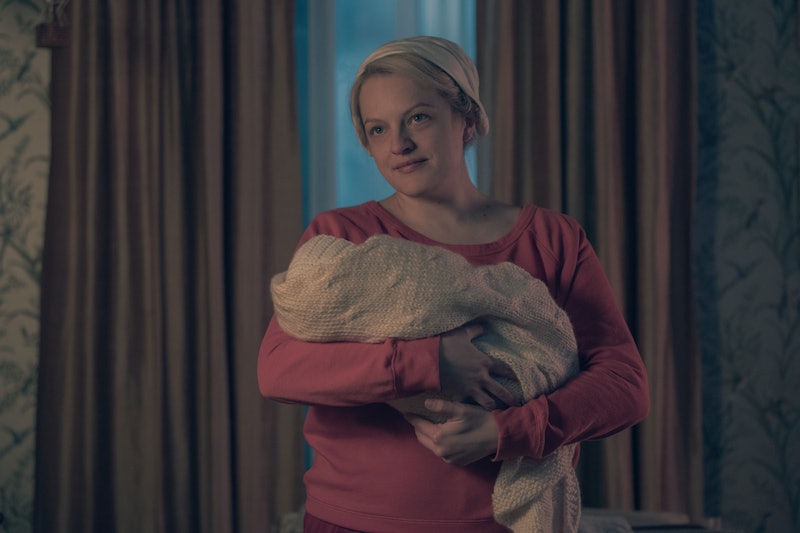 Every The Handmaid's Tale viewer has been desperately awaiting the moment when June would finally be able to escape the Waterford's home, and Gilead, once and for all. And in Wednesday's Season 2 finale, they finally catch a solid glimpse of such a feat. Spoilers ahead for the Season 2 finale of The Handmaid's Tale. Just as it seems like June is about to leap into the arms of certain safety, she hands off her new baby to Emily, and says to go on without her. There's a valid reason why June didn't leave Gilead, but it's too soon to tell if the decision will pay off — both for her and the series itself.

Just before June makes this game-changing decision, she tells the baby in her arms all about her big sister, Hannah, and declares that one day, the two of them will meet. This touching moment, paired with a flashback of June's life with her first child and her husband Luke, make it clear what's going through her mind. At that last minute, June seems to decide that there is no way she can leave Gilead while any of her children, especially a daughter, remains there.

The moment makes for a worthy cliffhanger, and the shot of June's determined smirk just before she walks into the rainy horizon is chilling, but there are some issues with her choice — both in practicality and in storytelling — that The Handmaid's Tale will have to tackle.

The reality is that June is now in no better of a situation than she was at the beginning of this season, and that's really frustrating for some viewers (and this one in particular). Sure, there are some resonant perks she's gained, like the fact that she had a pretty healthy pregnancy and labor, her infant is likely en route to safety out of the country, and she's no longer at the direct mercy of Serena and Fred. But viewers say goodbye to her for the year while she's still in Gilead, still dressed openly as a handmaid, and still someone who likely doesn't have any idea where to actually go to find Hannah. The situation raises so many questions.

Like, will she find any allies in her search for her daughter? The Marthas who secretly shuffled her through the district seem keen to help, but they also need to keep up appearances and prevent their own covers from being blown. Commander Lawrence, the creepy, mysterious newcomer who may just be one of the masterminds behind Gilead as a whole, reveals himself in the finale as being in cahoots with the resistance, so he could also potentially offer June a helping hand.

And there's Nick, of course, who is obviously in love with her and has likely burned his own bridges with Fred once and for all, so maybe he'll join her. But none of these people seem in a real position to give June immediate help.

Until she finds that help, how exactly is she going to fly under the radar? She can't go back to the Waterford's home and go about her routine, since she essentially kidnapped their child in the eyes of Gilead's laws.Even if they somehow shift the blame away from June and onto someone else, as they've done every other time June's rebelled, it seems unlikely that Fred will play along, especially as he reels from Serena's defiance. June will need to go into legitimate hiding, even as she schemes to break Hannah out, and it's hard to see how she'll do that while still donning that bright red cape, and authorities likely on the lookout for her. In this case, June, and us viewers, are right back where we started the very first time she was able to get out of Gilead. And the all of the other times she almost got away.

The cliffhanger ending in this finale is definitely dramatic and jarring, but after you sit with it for a few minutes, you have to wonder — are we really going to do this again? "The show seems to have fallen into a pattern of one episode of quiet desperation followed by the next peppered with small bits of hopeful action that are quickly beaten down," wrote Reddit user cyanocobalamin ahead of the finale in a Handmaid's Tale discussion thread. "This was good for establishing the story and the mood. However, if that is all that [it's] ever going to be, they should move the story along and end the show," they added.

Others in the thread agreed. "I wish [Season 3 would] shift focus on armed resistance, protests and marches," wrote another user, RinoTheBouncer. "I’m really tired of the baby steps of progress." Viewers have already seen June flirt with the illusion of escape countless times, and though this particular extended stay in Gilead is different because it is her own choice, it doesn't make it any less repetitive.

If anything, June might have been better able to help Hannah from the outside instead of sticking around. At this point in the series, a tearful reunion with Luke and Moira that transforms into a badass, Canada-based campaign against Gilead and the Waterfords, with June at the helm, sounds like a much more intriguing arc than just another iteration of June sneaking through the snowy bushes toward another potentially ill-fated goal. Right? These outside plots could also address the show's potentially gratuitous violence that has been bothering some critics this season. (Although you could also argue that the increasingly disturbing violence is the only thing driving the plot at the moment.)

In any case, The Handmaid's Tale is going to have to shake things up somehow for next season, because right now, it's hard to see how June's decision doesn't just produce a retread of Season 2. Don't get me wrong: The show's actors never falter in their abilities, and aspects of its storytelling have been legitimately outstanding this season. Serena's ambiguous morality, the meeting between Nick and Luke, and Eden's heartbreaking demise were all particularly notable subplots that really expanded upon international relations and what it means to be a woman in Gilead.

It made sense at first that viewers didn't know anything about the world outside Gilead, because June herself didn't either. Keeping fans in the dark was, for a time, just a way mirror her experience. But it's time to move on. If the show continues this cycle of teasing its viewers with escape and justice only to snatch it away at the last moment, it'll become increasingly difficult to justify what exactly viewers are enduring the pain to reach.

More like this
'Bridgerton' S3 Teases Exciting Social Season For Penelope Featherington
By Bustle
'Doctor Who's New Companion Has Been Winning Acting Awards Since She Was 18
By Shahed Ezaydi
The Kenan & Kel Reunion On SNL Took A Dramatic Turn, Thanks To Keke Palmer
By Brad Witter
Keke Palmer Just Announced She's “Going To Be A Mom” On SNL
By Brad Witter
Get Even More From Bustle — Sign Up For The Newsletter