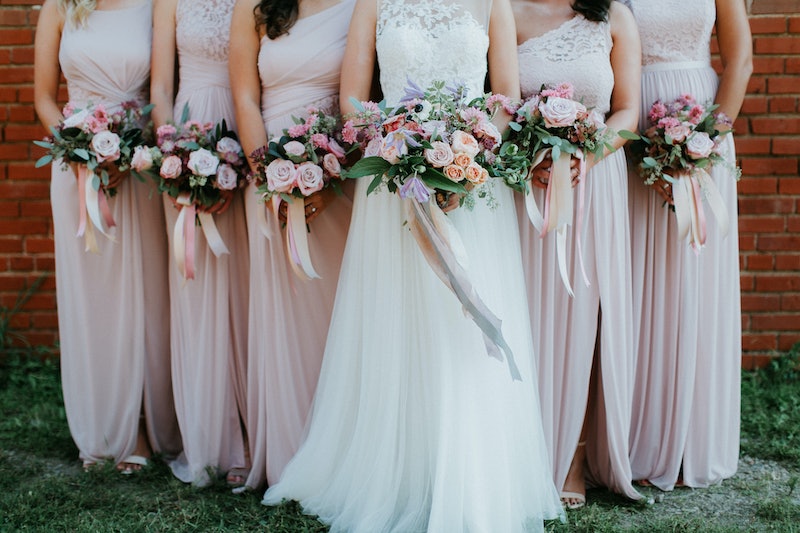 If you know anything about weddings, then you've probably noticed that, more often than not, the bridesmaids tend to all wear the same dress. Typically, this means going to a shop with the bride well before the wedding in an effort to find something that suits everyone. Then, perfecting the look on the big day by adding jewelry and makeup — again, usually all in the same style and hue.

Of course, it's easy to see why a couple might want their bridal party to match the overall decor, especially if their wedding is formal and they're following a lot of traditions. But surprisingly, the real reason why bridesmaids match, according to history, has nothing to do with looks or decor or beautiful photos, and everything to do with safety.

As it goes, back in Ancient Rome, "the bride and bridesmaids were dressed the same so they'd be nearly indistinguishable," Samantha Bellinger, author and wedding event planner at 620 Events, tells Bustle. They didn't want the bride to stand out in white among five purple-y bridesmaids, like she does today, but to get lost in the crowd.

While it may sound odd, it was all in "an effort to ward off bad spirits and other suitors/would-be husbands," Bellinger says. Whether it was a spirit or a jealous ex coming to crash the wedding, they figured if all the bridesmaids looked the same, it would provide enough confusion so the couple could get married, without being targeted.

"The bridesmaids were effectively decoys," Bellinger says. They milled around the event wearing the exact same outfit, so their friend could slip away to the alter in peace. Cut to Victorian times, when Queen Victoria set the white wedding dress trend, Bellinger says, and the bride began to stand out in the now-classic ivory gown. But the tradition of matching bridesmaid dresses has lived on.

Nowadays, nobody's thinking about Ancient Roman times, or worrying about confusing evil spirits when they decide to wear cobalt blue or blush pink. Instead, it's about making the bride the focal point of the wedding, and surrounding her in a "pool of her nearest and dearest in a uniform that matches the overall theme of her wedding," Neela Asaadi, a wedding branding expert, tells Bustle.

Trends are changing, though. Instead of putting everyone in the exact same gown, many couples opt for "color schemes for close friends or unofficial bridesmaids," Asaadi says. A bride might say she's looking for everyone to wear a shade of yellow, and then leave it up to her friends to choose their own dress in a style they like best. As Asaadi says, "It is more common to see varying styles that all fit within a spectrum of color/ shade and level of formality (fancy/ casual)."

Lots of brides love the idea of mix and match, Lara Friedrich, PsyD, a licensed psychologist and wedding coach, tells Bustle. And they want their bridesmaids to feel comfortable expressing their individuality. This break from tradition makes it easier for each member of the wedding to a choose a dress that fits their price point, Friedrich says, so no one's breaking their budget on a dress they'll (probably) only wear one time.

Also, there's been an "important shift in having different genders on the 'bride’s' and 'groom’s' wedding parties," Friedrich says. "Sometimes their most important people aren’t the same gender, so the people getting married want everyone standing up with them to be able to wear something they feel good about, whether it’s a dress, suit, or something else."

So while some folks still love the look of wearing matching dresses, many couples are breaking from tradition and choosing outfits that make the bridal party happy — whether they all look the same, or not.