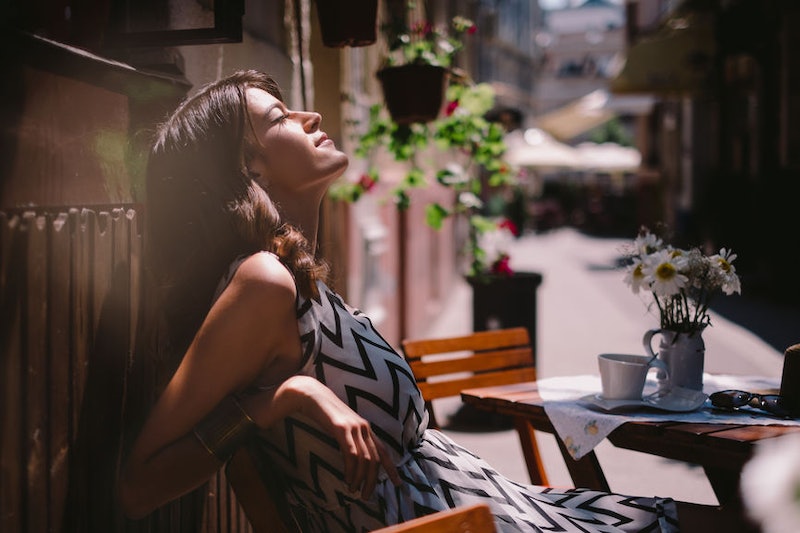 Marija Savic/Stocksy
By Sophie McEvoy
May 30, 2019

Living in a country with a temperate climate, even the summer months can end up being washed out by rain. But when the climate is just right and brings a few days (or even a few weeks) of welcomed sunshine, it's unsurprising that many Brits make the most of it and tend to feel an uplift in their mood. I spoke to experts from mental health charity Mind and Smart TMS, a treatment service for mental health issues, to find out why people tend to feel happier in the summer.

As Isabel Leming, Senior Technician at Smart TMS tells me there's a link between sunny, clear weather and elevated mood because Vitamin D levels are boosted by exposure to sunlight. "A known side effect of Vitamin D deficiency is low mood, so when the weather is sunny and clear, naturally mood improves," Leming explains. "On a more psychological basis, the sunny weather tends to encourage people out of their houses to spend time with family and friends, be it at a BBQ or going for a walk. Winter months can be isolating, so increased interaction in warmer months alleviates symptoms of SAD."

Seasonal Affective Disorder (SAD) "is a type of depression experienced at a particular time of year or during a particular season," Rachel Boyd, Head of Information at Mind tells me. While seasonal changes can impact anyone's mood, for people affected by SAD "the change in seasons has a far greater influence on mood and energy levels, potentially having a significant impact on everyday life," Boyd says. While this disorder is most often experienced during the colder months, you can also experience reverse SAD which, according to Everyday Health, is "a rare condition that affects people when the weather is warm."

As Leming explains, "according to a study from The Weather Channel and YouGov, up to 29 per cent of the UK population suffer from some degree of seasonal affective disorder, [which] often hits during the colder months because of less light exposure during the day."

She adds: "This is because a drop in serotonin from light exposure may trigger depression, and the change in season can disrupt the balance of the body's level of melatonin, which plays a role in sleep patterns and mood."

According to the NHS, "the main theory is that a lack of sunlight might stop part of the brain called the hypothalamus working properly. It may also affect the production of certain hormones such as melatonin, serotonin, and the circadian rhythm (the body's internal clock). Whether you experience SAD in the winter or the summer, there are ways for you to combat the symptoms. "When it comes to treatments, what works for one person won't necessarily work for another, and it's likely to be a combination of things that is most effective," Boyd tells me.

"Taking exercise (especially outdoors), eating healthily, socialising and trying to avoid stressful situations can all be beneficial. If you've noticed changes to your feelings, thoughts and behaviour that last longer than two weeks or keep returning, talk to your GP, who should be able to talk you through treatment options if needed," she advises.

Leming also promotes the benefits of exercise and says that it "helps relieve stress and anxiety, both of which can increase SAD symptoms. Being more fit can make you feel better about yourself, which can lift your mood." She also suggests that "exposure to light can contribute to better mood and the alleviation of symptoms of SAD in the summer."