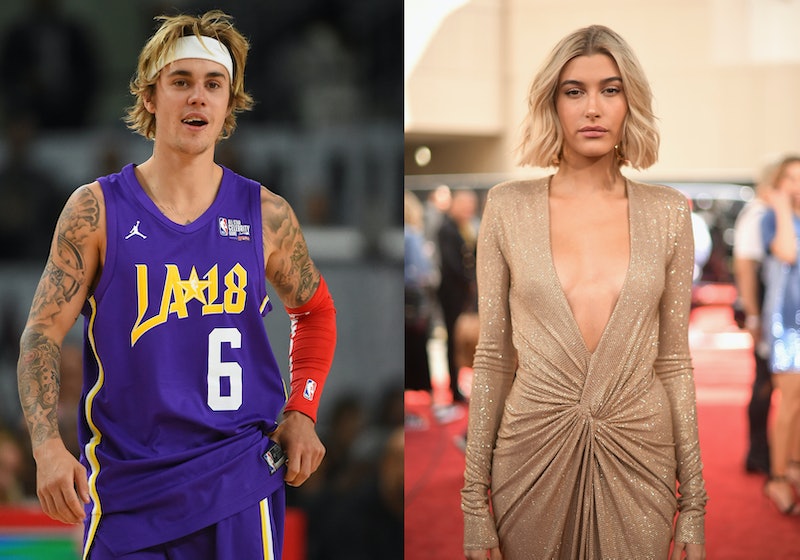 Celebrities are different from the rest of us. While we private citizens average about 3.2 years in a relationship before we consider getting engaged, and tend to pop the question at the end of our twenties, some people — like, say, Ariana Grande and Pete Davidson — may get engaged in their early 20s, after dating publicly for only a few weeks. Now, Justin Bieber and Hailey Baldwin are the latest to join this club, after dating on and off for several years, and becoming "on" again around a month before Bieber reportedly proposed. But a very, very quick engagement isn't just a celebrity thing, though — people do it all the time. And the psychological reason why people get engaged really fast is, in a word, fascinating. What drives people to make a huge commitment to someone they may have never even heard snore?

"Getting married is the most powerfully formal expression of love or feelings for one another," says Joshua Klapow, Ph.D., a clinical psychologist and host of The Kurre and Klapow Show. "It's often a way to publicly and privately solidify feelings, formalize feelings, and create a base of stability in a life that can be very unstable."

"Many celebrities struggle with living a life of constant scrutiny and erratic schedules," Caleb Backe, a health and wellness expert for Maple Holistics in New Jersey, tells Bustle. "This complicated lifestyle compels them to latch onto whatever they can to ground them. That being said, it makes sense why they [may] rush into marriages, because it allows them to maintain some semblance of stability in their chaotic existence."

While studies haven't specifically looked at the phenomenon of young celebrities getting married quickly, a 2014 study that looked at high rates of engagement and marriage among young people in the U.S. military may provide some insight. Researchers found that members of the military were more likely to get engaged or married younger because of the emotional and economic benefits; while people in the military often have a steady, reliable career progression, their jobs can involve high pressure, personal risk, and instability, which entails a lot of personal separation from loved ones.

"Military couples know that it is quite possible that they may not see their significant other for long periods of time, and there are similarities for celebrities," says Klapow. "The travel, the separation, and the uncertainty that comes with a celebrity lifestyle can prompt young celebrities who have feelings for one another to want to find stability."

But those are people in uniquely high-pressure situations — what about your cousin's ex who got married to the literal next person he met? When it comes to young people in particular, many people are quick to dismiss a fast engagement as the whims of someone who has no idea how to control their impulses. But it turns out that the idea that young people are simply following their gut urges at every turn isn't all that factual.

According to research from 2017, young people who appear impulsive are simply trying to experience new things and explore. But young adults don't actually lack a neural "control" switch in their brains; the study found that in most brains, the ability to exert cognitive control (and stop yourself from doing something stupid) develops way before we turn 25. And, since we're talking about successful artists here, it's worth noting that being successful in most areas, studies have found, actually requires quite a lot of impulse control to help you work hard when you want to be partying.

Another facet of the issue, experts say, is that we think of a quick engagement as being an impulsive decision, but it isn't automatically. "Getting engaged quickly doesn’t necessarily mean that you’re an impulsive person," says Backe. "Impulsivity implies that your actions are driven by base needs and desires, as opposed to rational thought. In many cases, getting engaged quickly may actually be a smart decision." And if that's the case, then who cares?

At the end of the day, nobody can judge anybody else's engagement journey; I got engaged after 18 months to a dude I hadn't lived with, and we're coming up to our 5 year anniversary this summer. Just because it's rapid and happens in the glare of paparazzi doesn't mean it won't last.

More like this
10 Ways To Be More Empathetic To Your Partner
By Raven Ishak and Lexi Inks
It's A Pleasure #53: Help! My Boyfriend Won't Tell Me Why He Stopped Going Down On Me
By Sophia Benoit
The Differences Between Kinks & Fetishes, Explained
By Lexi Inks
6 Dating App Tips To Try If You're Looking For A Serious Relationship
By Lexi Inks
Get Even More From Bustle — Sign Up For The Newsletter