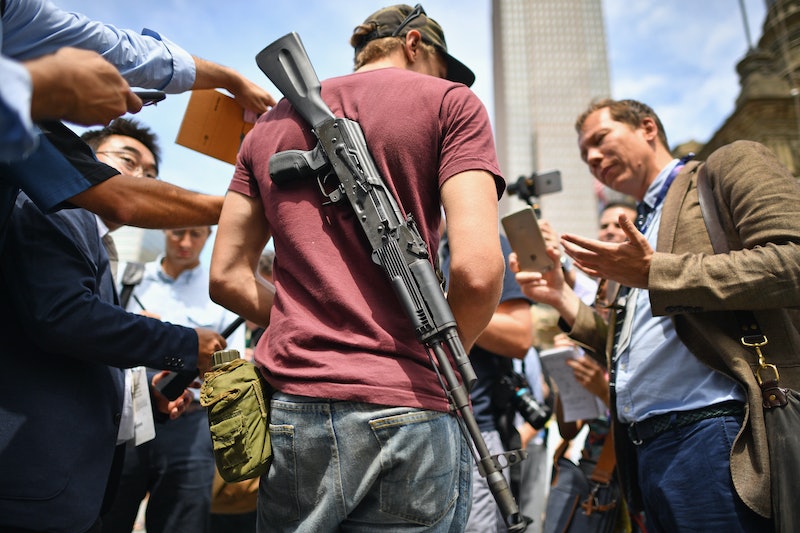 A new study conducted by Baylor University has found that white male gun owners with money stress are more likely to be attached to their guns — and, perhaps even more startling, they're also "more likely to see violence against U.S. government as sometimes justified."

The study — entitled "Gun Culture in Action" — was published in the latest edition of journal Social Problems. In analyzing differences in American gun owners, researchers found that behaviors vary dramatically. Among white respondents who face money issues, "gun empowerment delivers a sense of meaning to life that neither economic status nor religious devotion currently provide."

The more emotionally attached one is to their gun, found the study, the more likely they are to reject gun control policies and believe that violence against the U.S. government can be justified. According to researchers, those owners' attachment to their guns can be drawn "directly from popular narratives concerning American masculinity, freedom, heroism, power, and independence."

By contrast, the study found that nonwhite gun owners who face financial stress are less likely to place as much importance on a gun, and "much less likely to approve of violence against the federal government even if they feel high levels of economic stress," stated a Baylor University media release.

In the release, Baylor sociology professor Paul Froese, Ph.D., attributed that to the fact that nonwhite gun owners have potentially developed "different coping mechanisms" to economic anxiety, rather than violence.

Froese also noted the paradox of the patriotism white male gun owners often tout, saying that they "see themselves as hyper-patriotic, but they are the first to say, 'If the government impedes me, I have the moral and almost patriotic right to fight back.'"

In addition to detailing the emotional attachment gun owners have to their weapons, the co-authors of the study developed a "gun empowerment" scale, to determine how religion plays a role.

But white male gun owners who are highly religious in terms of church attendance and religious belief are less likely to find guns emotionally empowering, researchers said. They suggest that strong religious ties do not enhance an owner's attachment to guns but instead counterbalance it. White men with nominal connections to religious communities are most connected to their guns, researchers say.

Other studies have also examined the relationship between race and gun ownership. Mother Jones' study of mass shootings between 1982 and 2017 found that the majority of the 96 mass shootings listed were committed by white men — 54 out of 97 perpetrators.

As the Baylor study suggests, gun ownership is often viewed (by conservatives, at least) as patriotic. A 2014 poll by Fox News found that 50 percent of conservatives believe owning a gun is patriotic.

According to Baylor's research, gun owners, on average, are more likely to be white, male, married, older and rural than non gun-owners. They are also politically more conservative, attend church more often, and "report being more alienated from society" than those who do not own guns.

A slew of recent mass shootings have recently led to renewed calls for gun control, with many blaming the NRA's powerful hold on Congress for the ease at which potential shooters can access powerful weapons.

The Baylor study's own researchers say their findings demonstrate the gun lobby is not the only thing shaping American gun legislation, however.

"It is the cultural solidarity and commitment of a sub-group of Americans who root their identity, morality and patriotism in gun ownership," Froese said. "This is gun culture in action."