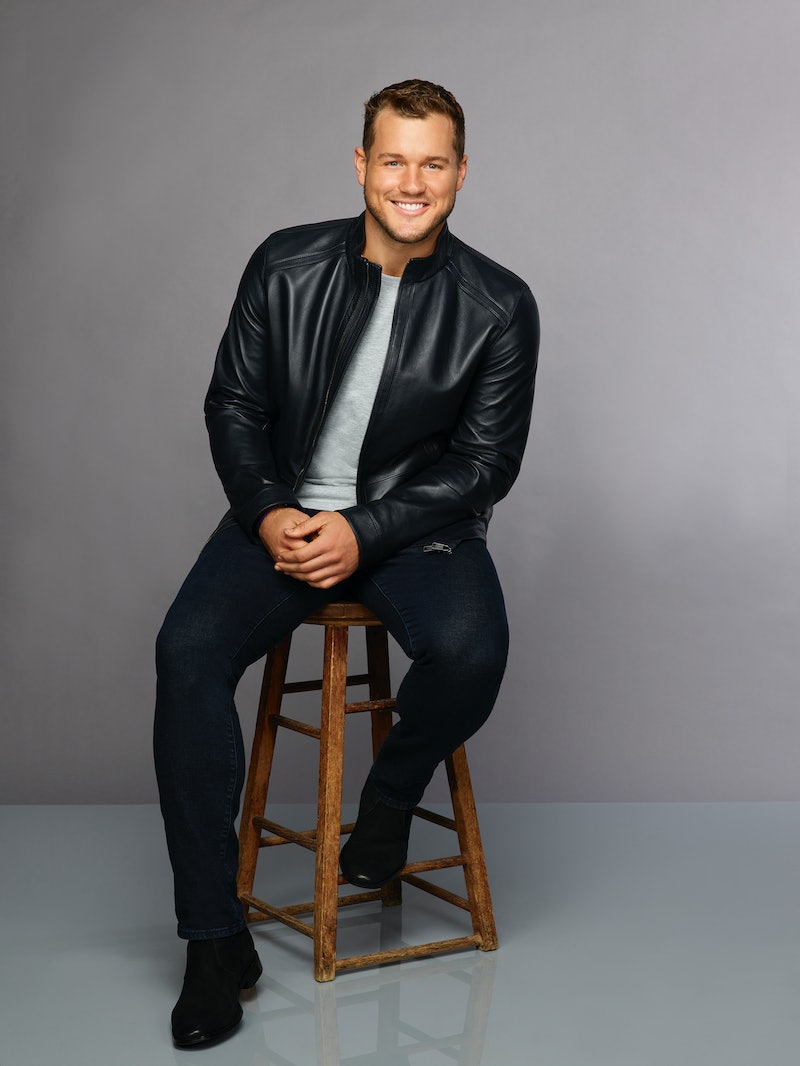 Anyone who watched Becca Kufrin's Bachelorette season will remember that one of her suitors, Colton Underwood, was a virgin when he was on the show. They'd remember it because the series couldn't stop bringing it up — and going into his Bachelor season, it looks like that hasn't changed. The tagline on Colton's Bachelor poster focuses on his virginity, a move that will probably leave fans rolling their eyes.

From the beginning of Becca's Bachelorette season, Colton's virginity was teased in the show's previews for future episodes. He didn't bring up the topic with Becca until they'd started forming a real connection, but it was clear from early on that it would be a point of discussion. And while the conversation between Colton and Becca felt honest and respectful, the fact that the show's promos kept teasing this supposedly big reveal about Colton was more than a little frustrating. Even the first trailer for Becca's Bachelorette season featured a snippet of Colton and Becca's conversation, even though it didn't happen until week 7.

Considering how much emphasis was placed on Colton's virginity during his time on The Bachelorette, his new Bachelor poster is pretty disappointing. Shared by Bachelor host Chris Harrison on Thursday, the poster reads, "What does he have to lose?" It doesn't take much guessing to figure out that the question is a blatant reference to Colton's virginity.

This isn't the first time the show or Harrison have referenced Colton's virginity ahead of his Bachelor season, either. During a recent conversation with Extra, Harrison was asked about Colton's virginity, and the host shared that Colton was still a virgin at the time. Of course, that interview was conducted before the show filmed its Fantasy Suite episodes, so that could change by the time the season is over.

Still, it's uncomfortable that so much of the promotion ahead of the new season is about Colton's virginity status, especially since he's not directing the conversation himself. Sure, The Bachelor is about finding love, and Colton will probably have to have some difficult conversations about sex and virginity with the women he grows closer to over the season. But that doesn't mean ABC needs to draw viewers in by constantly drawing attention to Colton's virginity. (ABC declined to comment to Bustle on The Bachelor's emphasis on Colton's virginity.)

Being a virgin is just one part of who Colton is, and frankly, there are plenty of other topics that could have made for a better tagline. Colton is a former NFL player who founded a charity to help people with cystic fibrosis. On his hometown date with Becca, Colton chose to use his charitable side by taking her to visit a children's hospital.

But you'd never know any of those things about him from the new poster — it seems like all ABC wants to emphasize is the fact that Colton went into his Bachelor season without having had sex.

There's also the fact that last season, Arie's Bachelor promos didn't seem to focus on one aspect of his life above everything else. Sure, fans knew he was a race car driver and real estate agent, but neither of those things were beaten to death the way the topic of Colton's virginity has been. (For reference, Arie's Bachelor tagline was "Worth the wait," an apparent nod to the fact that he'd appeared on The Bachelorette several seasons before being cast on The Bachelor.)

When the idea of gender-based double standards comes up, it's usually in reference to women being slut-shamed (something that's also happened in the Bachelor franchise). But the constant focus on Colton's virginity is a double standard, too — it's hard to imagine ABC would give a similar tagline to a Bachelorette star who happened to be a virgin. The implication that because Colton is a former football player, it's atypical for him to be a virgin, isn't helping anyone. Instead, it's reinforcing stereotypes about masculinity that really shouldn't have a place in the 21st century.

It's uncomfortable how much Colton's virginity is being played up ahead of his Bachelor season — hopefully it won't be the sole focus of the show's upcoming episodes. Any discussion surrounding Colton's virginity should be on his terms, not the network's.