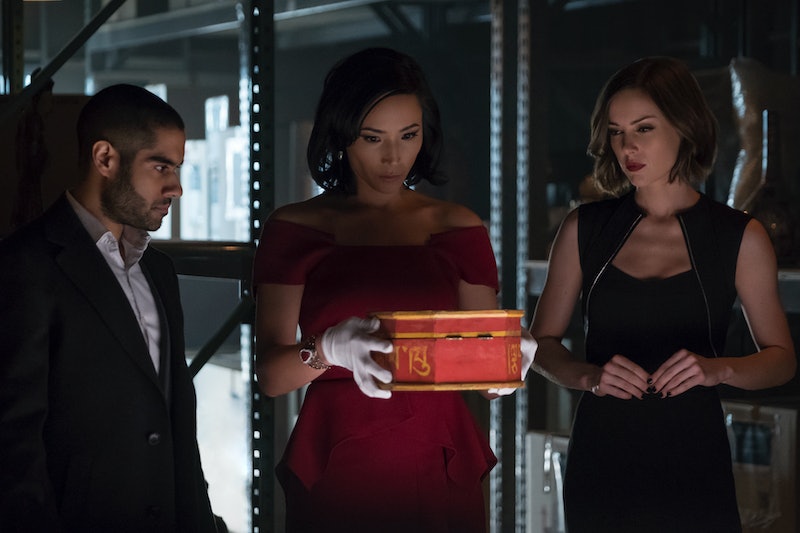 Spoilers ahead for Iron Fist Season 2 through Episode 6. Davos has a clear goal at the beginning of Iron Fist Season 2, but his methods are as mysterious as his home city of K'un-Lun. Davos arrived in New York City carrying a vendetta against Danny Rand for attaining the power of the Iron Fist and abandoning K'un-Lun — but how is some old bowl going to help Davos get his revenge? The reason why Davos needs the bowl in Iron Fist Season 2 isn't very clearly explained, but it doesn't take enlightenment to be able to see that him getting it is bad news for Danny.

The team-up of Davos and Joy Meachum is a classic case of opposites attracting, with Davos' physical training and knowledge of K'un-Lun mysticism complimenting Joy's social prowess. Joy's connections allow her and Davos to peek into the catalog of an antiques dealer with some interesting items. However, of all the items that dealer Mika Prada has on hand, the item that is of most interest to Davos is a simple metal bowl.

Davos, one not associated with having any sense of "chill", can't contain how badly he needs this particular bowl once it is shown to him. He goes to reach for it, and proclaims that he needs it immediately, despite Mika explaining that that's not how multimillion dollar antique auctions work. While Davos never says why he needs the bowl, the look in his eyes and the fervor with which he reaches for it hint that it's not merely any old eating receptacle — it's from K'un-Lun.

Davos seems to be collecting merchandise from his former home, through nefarious means. Davos seduces Mika to try and ensure he's able to procure the bowl without going through the proper channels and forego any kind of restoration process, and later in the same episode assassinates a local crime lord who refuses to smuggle something into New York for him. Whatever Davos is in need of is clearly not in New York City, but what could Davos be doing with K'un-Lun relics? K'un-Lun disappeared in the Season 1 finale of Iron Fist, so either Davos is trying to make his way back into K'un-Lun or is trying to perform a K'un-Lun ritual outside of the mystical city.

Davos' trek outside of K'un-Lun was spurred by jealousy of Danny, so it's possible that Davos is preparing some kind of ceremony to give himself Iron Fist-like powers, or attempting to make some K'un-Lunian weapons that can match Danny's powers. Alternatively, Davos may be trying to find a shortcut to return to his home and serve as its protector now that Danny is no longer around to do the job.

Davos' plan may not be clear, but his ambitions are clearly greater than to simply have a bowl of whatever breakfast cereal was most popular in K'un-Lun. Will he use this bowl to try and protect K'un-Lun, or to destroy Danny? It's very possible that Davos believes that those two are the very same thing.