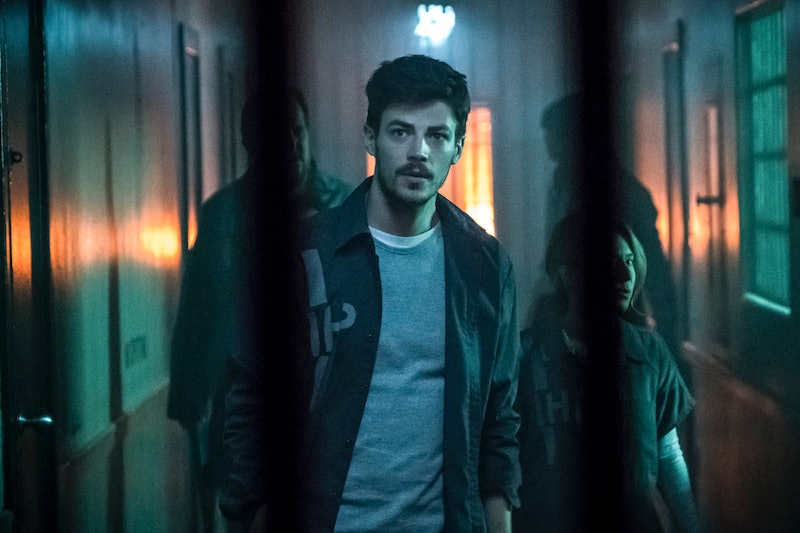 DeVoe's plans for "The Enlightenment" are finally taking shape, and it is absolutely nothing good for Barry and Team Flash. The Thinker made a major play in The Flash's "True Colors" and revealed the next step in his master plan: get all the bus metas. DeVoe wants the bus metas on The Flash for one reason and one reason only: to absorb their powers.

DeVoe, now in Dominic's body, is gaining more power every day thanks to his new body, mind-reading power, and thinking cap. His mind is so powerful, he's even beginning to have the ability to read minds, something the Mechanic isn't too wild about. (Later, DeVoe moves forward with a plan without telling her, and based on her disappointed reaction, it looks like trouble in paradise is certainly brewing.)

Meanwhile, upon hearing that Warden Wolfe plans on selling him and the bus metas he captured and put behind bars as the Flash to Amunet, Barry rounds up Becky (a.k.a. Hazard), Sylbert (Dwarfstar), Mina (Black Bison), and Ramsey (Kilg%re) and stages a prison break. Barry manages to get the bus metas safely outside of the metahuman wing, allowing them use of their powers. Unfortunately, Wolfe is there waiting for them, and he knows something none of the metas do: Barry's real identity. After tagging him with a power dampening ankle monitor, Wolfe reveals that he's the Flash, causing all the metas to turn on him. All the metas, that is, except for Becky. She doesn't want to be a criminal anymore, she wants to do good and live a normal life. And right now, doing good means protecting Barry.

Just when it looks like Becky has the upper hand, a third party arrives. Amunet storms in ready to fight, but Becky has her luck zapped in no time. And that's when DeVoe shows up. Amunet is quick to run away as he dampens the metahumans' powers, but the rest of them are stuck at his mercy. Using his chair, he absorbs each bus meta's power the same way he did Dominic (and, it seems, the man who cried love tears) before importing his mind into Becky's body. As his last move, the Thinker kills Wolfe, and then he disappears, leaving Barry alone in a room full of dead officers, dead metas, and one dead warden. With Caitlin and Cisco's help, he's able to zoom back into his original Iron Heights cell before the cops catch him at the scene of the crime. And, even though he had to watch five people die at DeVoe's hands, the night wasn't all wasted, as Barry saw first hand what the Thinker wanted: the bus metas.

Luckily, Barry is able to get out of jail and consult the team the very next day. This time, he didn't break out of jail. Instead, Dibny uses his newfound chameleon power, that allows him to change his physical appearance and adopt the voice of another person, to impersonate DeVoe himself and show up unexpectedly at court. With DeVoe "alive," the judge dismisses the case of his murder, and Barry is set free! (It's a small, but important victory.) Once home, Barry reveals to Team Flash that in Iron Heights, DeVoe had access to any number of metahumans Barry has put there over the years, but instead he only took the powers of the bus metas, which means that Dibny and the remaining bus metas are in danger.

So, what does that mean for Team Flash? Well, for one thing, it means Dibny's going to have to be a lot more careful in the field. It also means they're going to have to get to work tracking down the other bus metas so that they can protect them. But, more than that, it means that DeVoe's plans, while always specific, might have been even more detailed than Team Flash ever thought. The fact that he isn't willing to collect powers form other metahumans suggests that he knows exactly what powers the bus metas have and has a use for each of them.

More like this
This 'Gossip Girl' Wardrobe Error Has Gone Viral On TikTok
By Alyssa Lapid
A New 'And Just Like That' Table Read Pic Confirms A Key Character's Return
By Jack Irvin and Grace Wehniainen
'RHOSLC' Star Jen Shah Refuses To Do A Post-Sentencing Interview With Andy Cohen
By Brad Witter and Jake Viswanath
Mollie Gallagher Has A Deeply Personal Reason For Taking Up Skating
By Maxine Harrison
Get Even More From Bustle — Sign Up For The Newsletter
From hair trends to relationship advice, our daily newsletter has everything you need to sound like a person who’s on TikTok, even if you aren’t.