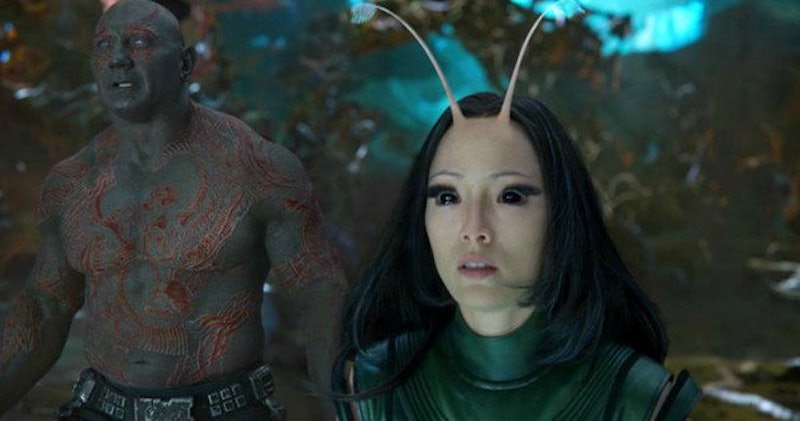 Like most superhero movies, Guardians of the Galaxy Vol. 2 leaves the viewer with plenty of questions. Yet one of the biggest head-scratchers from the film isn't about how the story will continue in a sequel, or why a fan favorite was left out of the picture — it's about why a certain character negatively highlights the looks of another, repeatedly throughout the film. Seriously, why does Drax call Mantis ugly in Guardians 2? The "joke" isn't funny, and it takes away from an otherwise enjoyable film.

Some background (and some spoilers): in the new movie, the Guardians are introduced to Mantis, an alien with empathic abilities (she can read people's emotions, and sometimes control them) who's had little prior social interaction. She's awkward and naive, and so she makes a good companion for Drax, the brutish, straightforward warrior whose behavior and sense of humor are often outside the human norm. Yet while Drax and Mantis share a certain innocence, from the moment they meet, their relationship is defined by one thing only: Drax's constant labeling of her as "ugly."

Several times throughout the movie, Drax notes how "ugly" or "disgusting" he finds Mantis, saying that she's far too skinny and unappealing for anyone to ever like. Mantis' own naivety — the only person she's ever met in her life is Ego (Kurt Russell) — makes it so she takes Drax's comments to heart, not questioning them in the slightest. As for the audience, Drax's criticism are meant to be played for laughs; we're supposed to find the comments funny, because Drax is clearly wrong (Mantis, portrayed by Pom Klementieff, is attractive) and so he can't be taken seriously.

But the thing is, he is. Guardians 2 may want you to view his comments as silly humor, but there's not much that's funny about an adult male character repeatedly telling a child-like female character that she's ugly. Sure, Guardians 2 tries to give Drax's comments a silver lining (he tells Mantis that because she's supposedly unattractive, she will know if someone truly loves her, since they will have to look beyond her looks, and that is a gift), but it doesn't excuse what he says.

And yes, the franchise makes clear that Drax's view of the world is not the "right" one, and so his comments about Mantis are meant to be seen as completely off-base, and therefore funny. But for young girls watching Guardians 2, all they might hear is a man telling a woman that she's ugly, over and over again. In a world where women's looks are constantly subject to judgment, especially from men, this, even as a "joke," might reinforce a dangerous message and bring out young viewers' own insecurities. We all know how damaging it can be for girls to hear criticism about their appearance at an early age (and Mantis, despite her adulthood, is as young as it gets).

Even more, it's disappointing to see Mantis, who has the potential to be an interesting, complicated character, be reduced to no more than a punchline to show off Drax's "humor." Women, especially those in superhero movies, rarely get the chance to have actual personalities and plotlines. And while Guardians may have more female characters than most of its Marvel peers, women in the film are still greatly outnumbered by men, with Mantis joining just three other ladies. The franchise can't really afford to waste one of the few women it has, and yet that's exactly what it does with Mantis, letting Drax's "joke" about her appearance be the main takeaway audiences get from her character.

Perhaps, in the next Guardians movie, Mantis will get a storyline she deserves, one in which her looks are not the focus — or even mentioned at all. Right now, though, the millions of girls and women buying tickets to Guardians 2 will only see a character defined solely by her appearance, and who gets denigrated, over and over again, by a man for the sake of a few laughs.

More like this
Meet The Disney Imagineer Bringing 'Guardians Of The Galaxy' To Epcot
By Charlie Mock
What Does Doctor Strange’s Third Eye Mean?
By Arya Roshanian
Elizabeth Olsen's Chris Evans Friendship Update Was Accidentally Hilarious
By Grace Wehniainen
Wait, Did Wanda Die In 'Doctor Strange And The Multiverse Of Madness'?
By Arya Roshanian
Get Even More From Bustle — Sign Up For The Newsletter