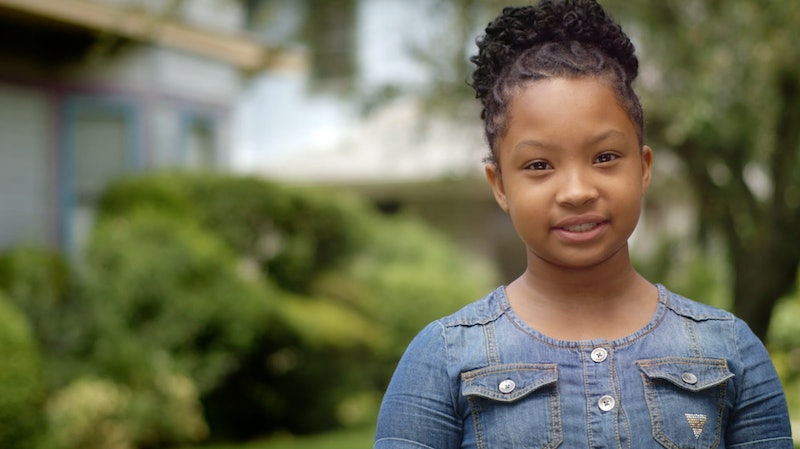 I'll never forget the time a teenage girl I'm close with told me about her plans for the summer. "I'd like to get started on figuring out which schools I'm applying to and hang out with my friends. And I also want to lose 60 pounds."

Stunned, I just said, "I don't think you need to lose 60 pounds." I mean, what are you supposed to say to something like that?

Unfortunately, I could have said she wasn't the only one who felt that way. A horrifying 81 percent of 10-year-old girls in the U.S. are afraid of being fat. Dove's Self Esteem Project research found that only 11 percent of girls surveyed (ages 10-17) said they were comfortable using the word beautiful to describe themselves, and nine out of 10 girls want to change at least one thing about their physical appearance. More than 60 percent of the girls Dove surveyed globally (age 15 to 17) report avoiding normal daily activities such as attending school, going to the doctor, or even giving their opinion in class when they feel bad about their looks.

As Dr. Susie Orbach, Co-Founder of The Women's Therapy Institute, said when I attended Dove's panel at the Women in the World summit about social media and girls' self confidence, "This isn't a trivial issue…civil society is being robbed by girls' confidence being undermined. These are girls with tremendous capacities, and desire to engage with the world. But this virus of body hatred … is perverting the kind of engagement it's possible they could have."

So what can we do about it? Drawing from my own experiences as a mentor, as well as Dove self esteem workshops I've attended, there are concrete things I think we can do and say to help girls (and boys too!) have more positive body image — while, conveniently, also helping our own confidence in the process.

It can be tempting to shut down any negative self-talk that girls say around us because a) it's really upsetting to hear a young girl call herself ugly or fat and b) because we obviously find them to be the most beautiful people we know. But if the girl in your life says something like, "I want to lose weight," try not to shut down the conversation with a denial. This is a key opportunity to open up the conversation about body image.

Your aim here is to try to let her voice the full extent of what she's feeling — and to help her get to what might be underneath. Which brings me to…

2. Ask Her Questions (And Try Not To Judge The Answers)

Instead of saying, "What?! You're crazy — you're not fat!" or "You're too young to worry about stuff like that," try saying something like, "I hear you, but it makes me sad you think you need to lose weight because I think you are beautiful, inside and out. But what makes you feel like that? Can you remember when that feeling started?"

If she doesn't want to talk about it, try asking other questions about what's going on in her life at a less sensitive moment — usually, body image issues are also a funnel for other stresses, and something may very well be going on with her friends or at school. Chances are, if she said something negative about herself in front of you, some part of her wants to talk about it. So find a way in — and remember, you don't have to be perfect. You just want to keep the conversation going.

3. Compliment Her On Things Besides Her Appearance

Sometimes I know I get so excited by how the young woman in my life is growing up so fast that it's hard not to always remark on how she's pretty, or how I love her newfound eyeliner skills. Those compliments are nice — but too often, we forget to build girls' self esteem in other ways.

Compliment them when they say something funny or smart, or on being a good friend, or mature for their age. It's important to be a person in her life who reinforces that she has worth beyond her looks or accessories.

4. … And Set An Example Of Accepting Compliments

We could all work on this one. If someone compliments you in front of the young woman in your life, pay special attention to accepting that compliment gracefully. No false humility, or disagreements — you don't want to set the example that she should argue with anyone who calls her pretty or smart.

Similarly, if you compliment her and she tries to deflect the praise, call her on it. If she doesn't see the problem with deflecting a compliment, open up a conversation about it. (This article might also prove useful.)

5. Don't "Fat Talk" (Or Otherwise Shame Yourself) In Front Of Her

"Fat Talk" refers to that phenomenon most all of us have taken part in — where we degrade our looks to ourselves or our friends. ("Ugh, I look so fat," or "My hair is awful today," etc.)

It's obvious to see how talking that way isn't beneficial to you — or the girl in your life.

As role models, "Everything [we] do represents the possibilities for that girl; what the world can be and what it can't be," Dr. Orbach said. "And every time a [female role model] looks in the mirror and sighs and says Ugh, that girl grows up thinking 'I see, what it means to be a grown-up woman is to go Ugh, Every time a woman says 'I shouldn't eat that," that girl is picking up on the idea that there are good foods and bad foods, rather than the idea that appetite and relish are important."

6. … But Do Be Honest About Your Own Struggles

Obviously, it might not be appropriate to disclose every negative thought you've ever had, but if you want to be a good role model to a young woman, know that one of the best things you can do is to examine and be honest about your own struggles.

It's OK to admit to a girl that you sometimes feel like crap about yourself too — in fact, that you relate to how she might be feeling is exactly what gives you credibility.

"Everyone [who tries to engage a young person about this] should go though a process of understanding their own relationship to their body, to beauty, to what they project, and to food," Dr. Orbach said. "Because otherwise, they're just delivering a lesson that doesn't work; that doesn't speak to their own conflicts, their own difficulties."

Emailing them a video like the one above might get an interesting conversation going. You might say something like, "I saw this and couldn't help but think of you and how I used to feel really insecure about my height. Not like I never get insecure now, but … just was curious what you thought of this. Does it resonate, or not so much?"

You could also talk to her about her social media habits in a way that isn't judgmental. After all, selfies aren't only about vanity. "[Young girls are] not just the object of the camera — they're producers of their own images," Terri Senft, an NYU professor on the Dove panel, said. "More girls are understanding that body image, when it comes to social media, is about 22 percent 'body' and about 88 percent 'image.' That means lighting, positioning, filtering, choices about sharing."

Most girls have already been constructing their own digital public personas for years, and they probably have an inner media critic just waiting to state her opinion. So the next time you see an ad worth examining, help her become a critical thinker, and ask her what she thinks about it.

Ads objectifying women might not be disappearing anytime soon — but, luckily, neither is your influence.

More like this
This TikTok Trend Will Help You Be Kinder To Yourself, Says Scarlett Moffatt
By Frances Stewart
I Have Eyebrow Alopecia – & Microblading Gave Me My Confidence Back
By Jessica Morgan
Why You're Seeing Green Bandanas At Abortion Rights Protests
By Lexi Inks
5 Ways To Stand In Solidarity With Women In America From The UK
By Sophie McEvoy
Get Even More From Bustle — Sign Up For The Newsletter