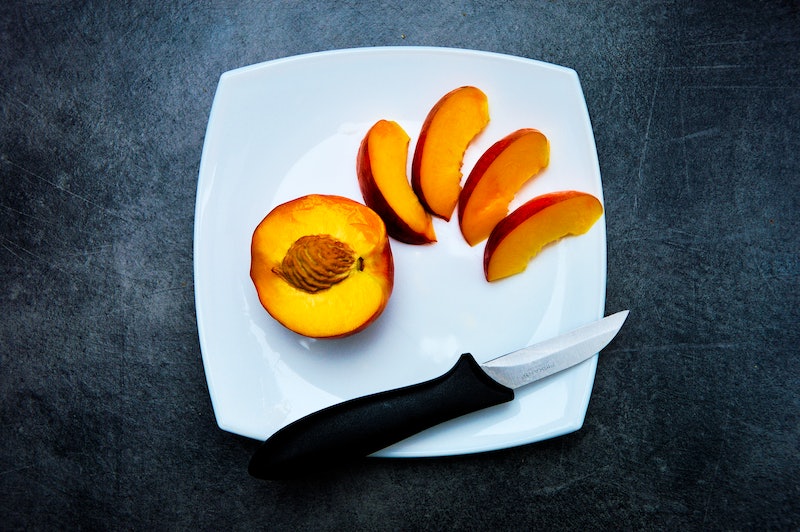 It’s something I’ve seen happen to a lot of people I know lately: After a lifetime of enjoying mangoes, or avocados, or carrots, or any of a number of other fruits or vegetables, they suddenly find that they’re unable to eat these delicious produce options anymore. They’ve also subsequently found themselves wondering, “Why does eating fruit make my mouth itch?” Because that’s just it: They seem to have developed an allergy seemingly overnight, although not to nuts or shellfish or any of the usual suspects. It turns out that oral allergy syndrome, also known as pollen food allergy syndrome, is very real, and although it’s believed by some experts to be under-reported and under-recognized, it’s still incredibly annoying — especially if mango used to be one of your favorite foods.

Although oral allergy syndrome isn’t a new discovery, a recent segment by Allison Aubrey on NPR’s Morning Edition, along with an accompanying piece on the section of NPR’s website called The Salt, unpacked it; it’s subsequently become widely discussed across the internet, so now seems like a good time to go over the basics. Generally classified as a mild allergy, oral allergy syndrome occurs when certain proteins in some fruits or vegetables don’t agree with your immune system, thereby causing an allergic reaction — usually an itchy mouth.

Identifying it can be a little tricky; as Aubrey reports at NPR, the tests typically used to identify food allergies often come back negative. One sufferer who Aubrey interviewed for the segment, Jessica Slattery, eventually received her diagnosis by giving a detailed history of her symptoms to an allergist, because all her tests kept coming back negative. It’s notable, though, that Slattery developed her allergies as an adult; according to the Rush University Medical Center, one of the things that sets oral allergy syndrome apart from other common food allergies (think peanuts and the like) is that it doesn’t usually appear in childhood. Instead, it tends to develop “in adolescence or adulthood, after repeated exposure to the cross-reacting pollens.”

Here’s what you need to know about oral allergy syndrome:

Honestly, this this is the most fascinating thing about oral allergy syndrome to me: The reason some fruits or vegetables cause some people to develop itchy mouths or other symptoms is due to those fruits or vegetables containing proteins that are similar to the proteins in certain types of pollen. When you eat those fruits or vegetables, the proteins can confuse your immune system and cause an allergic reaction — something which is called cross-reactivity. It helps explain why people who suffer from, say, hay fever might experience a slight allergic reaction to apples or celery; according to the American Academy of Allergy, Asthma, and Immunology (AAAAI), hay fever can be caused by exposure to birch tree pollen, which has a protein similar to proteins found in apples and celery. The AAAI notes that between 50 and 75 percent of adults with a sensitivity to birch pollen have also reported a reaction to apples and celery consistent with oral allergy syndrome.

The Mayo Clinic has a handy table that lays out some of the more common fruit or vegetable and pollen protein correlations, and its pretty eye-opening. If you’re allergic to birch pollen, you may find yourself unable to eat things like carrots, peaches, plums, and soybeans; if you don’t do well with ragweed pollen, things like bananas or melons might give you issues; if your allergy trigger is something originating from certain grasses, you might have problems with things like cucumbers, oranges, or tomatoes; and if mugwort gives you the sniffles, you might not be able to enjoy things like bell peppers, garlic, or onions.

(That’s far from a comprehensive list, though, so if you think you might have oral allergy syndrome, you’ll want to do some more digging to narrow down which pollen protein might be causing the issues for you — and, of course, get yourself to an allergist, because self-diagnosing is no replacement for a professional opinion.)

As you may have guessed, the most common symptom of oral allergy syndrome is a tingling or itching in the mouth or on the tongue, according to the AAAAI. You might experience similar sensations on your lips, in your throat, or elsewhere on your face; any of these regions may also swell. Usually these symptoms will rear their uncomfortable little heads right after you eat whatever your trigger is — but it’s also not unheard of for the symptoms to appear over an hour later. Severe reactions aren’t at all common, but in really, really bad cases (which, again, are quite rare), anaphylaxis might occur. Oral allergy syndrome can strike at anytime of year.

Other symptoms have also been observed in relation to oral allergy syndrome, too, though. (Now might be a good time to remind yourself that it's also called pollen food allergy syndrome — a name which doesn't have the word "oral" in it.) “We have a lot of people who come in with nonspecific abdominal pain, diarrhea, cramps, or incapacitating gastrointestinal problems,” Mary C. Tobin, MD of the Rush University Medical Center says. “And we’ve found that in many of these people it’s allergies that hadn’t been recognized as part of their allergy symptoms.”

Oral allergy syndrome isn’t typically classified as “serious”; the symptoms are usually a mild annoyance, but not life-threatening. However, as Gary J. Stadtmauer, MD writes at Medscape, “There is some disagreement among allergists on how seriously to take this problem (reportedly, 30 percent never prescribe injectable epinephrine for possible anaphylaxis, whereas three percent always do).” Stadtmauer is of the opinion that “many of these patients have the potential for anaphylaxis and should be warned appropriately.” And honestly, that makes sense to me; even if it’s generally a mild allergy, wouldn’t you want to be fully aware of what your situation might be? I know I would.

That said, though, managing it is fairly easy once you know you have it. Which brings us to:

What Can I Do About It?

The most obvious solution is just not to eat any fruits or vegetables to which you know you have a reaction. Interestingly, though, cooking or baking the food in question often solves the problem; the cooking process degrades the protein that causes the reaction, which means that if raw cherries make your mouth itch, you might be able to eat cherry pie with no problems. National Jewish Health also advises eating canned fruits or veggies during pollen season, peeling the food before eating it (since the protein is often concentrated in the skin of the food, rather than in the flesh of it), and taking antihistamine medication to help lessen your symptoms.

Good luck out there, produce lovers!