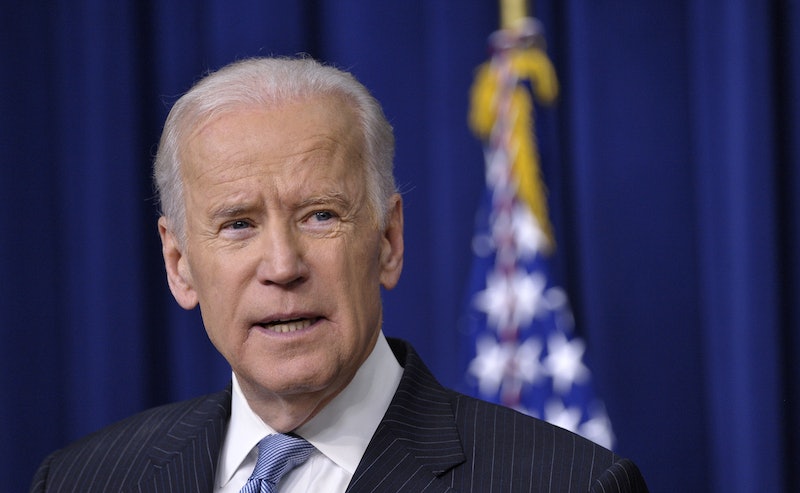 The lengthy, multi-step process by which America chooses its presidents continues to chug along, and it'll hit its next milestone on Jan. 6, when Congress meets to officially certify the results of the electoral college vote. That process will be overseen by none other than the vice president, as mandated by the U.S. Constitution. Some find this odd: Why does Joe Biden oversee the electoral college vote count? Why isn't that President Obama's responsibility?

President of the Senate isn't nearly as powerful as a position as the name implies; only in a select few circumstances does the vice president actually play a role in Senate proceedings. One of the biggest is when the chamber deadlocks: If there's a 50-50 tie on a Senate vote, the vice president steps in to cast the tie-breaking vote. Overseeing the electoral vote count is one of the other main responsibilities the president of the Senate/Vice President has.

But why does the vice president serve as President of the Senate? This is a more complicated question, but it basically comes down to separation of powers.

In this context, the system made sense. Having the vice president oversee the electoral vote count distanced the president, and the entire office of the presidency, from the electoral process, thus making it harder for an incumbent president to, say, nullify the results of an election and declare themselves president for life.

This might sound silly now, but it a serious concern for the Founding Fathers, many of whom were wary of a British-style monarchy taking hold in America. Delegating the electoral vote counting responsibility to the vice president was simply a method of preventing any one branch of the government (in this case, the executive branch) from gaining too much power.

Things have changed quite a bit since then, of course. Now, the vice president is very much part of the executive branch, and is essentially the junior partner to the president. From this perspective, having the VP oversee the electoral vote count isn't much different from the president doing so. But hey, at least it gives Biden something to do during his last few days in office.

More like this
Matt Hancock Broke a Major Rule With I’m A Celeb
By El Hunt
What To Know About Martin Bashir After Watching 'The Crown'
By Bustle UK
Michelle Obama Opened Up About The "Discord And Discomfort" Of Marriage
By Stephanie Topacio Long
'Waterloo Road' Is Back, With More Than A Few Familiar Faces
By Sam Ramsden and Vivian Iroanya
Get Even More From Bustle — Sign Up For The Newsletter