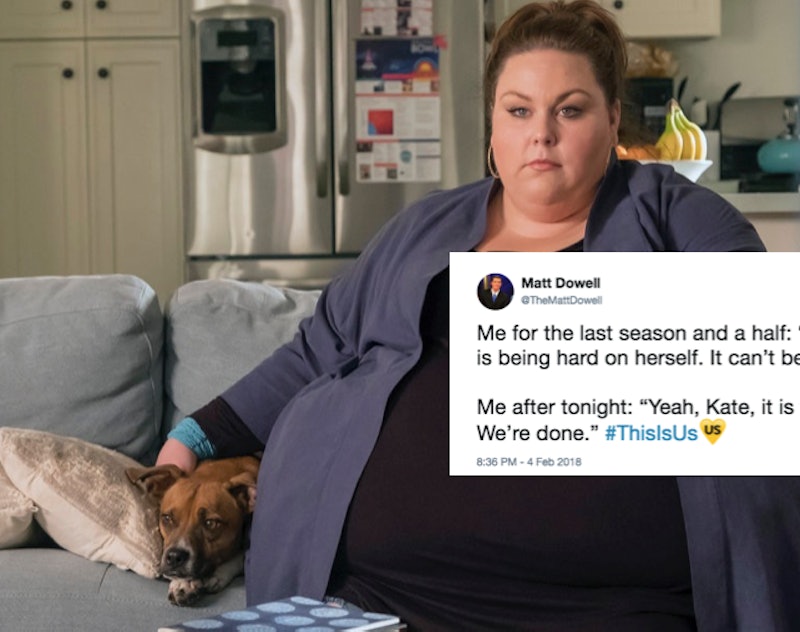 Major spoilers ahead for the Super Bowl episode of This Is Us (series writing: Kay Oyegun). Kate Pearson has some chips on her shoulder, and they all stem from her dad’s death. That’s the kind of thing that would change a person’s whole life, so that makes sense. And, Kate blames herself for Jack’s death because Jack went back into the family’s burning home in order to fetch her dog. Now that viewers have seen what really happened, fans blame Kate on This Is Us, too.

It’s, of course, not really Kate’s fault that her dad died. It was a horrible, accidental sequence of events that caused Jack’s death — missing batteries for the smoke detector, a faulty slow cooker, and then fire happened and Jack had to get his whole family out (and the dog). That kept him in the fire too long, which affected his lungs, which stressed them out, which caused a massive cardiac episode, which killed him. It is easy for Kate, who was only a teen when Jack’s death happened, to blame herself. It seems like she set it all in motion, even though she didn’t start the fire (no Billy Joel puns intended), and she didn’t actually tell Jack to go into the house and get her dog, and she certainly didn’t make her father have a heart attack. But it’s easy to see how your brain can twist and turn and play tricks. Unfortunately, the people on the Internet are less forgiving.

Many Went From Love To Hate

Love can be fickle.

And Some Just Stuck On Hate

The anger is understandable.

Some Don't Want To Blame Kate, But...

Others Would Have Left Louie

Dealing with Kate is so hard because she truly believes that she caused Jack's death. But like I said, Jack felt like he had to go get the dog — Kate never said, "Dad, please go find Louie in the house." He is a good person, and good people rescue their daughter's dog without it needing to be explicitly asked for. Heck, Rebecca asked him not to and he still did! There was no stopping that moving train. Plus, Jack grabbed keepsakes in the house, too. He spent more time in the fire than was necessary to save the dog, anyway.

Fortunately, though, it seems like Kate is finally growing, and she's finally reaching a point where she can let go of some of that pain and anguish surrounding Jack's death. Kate told Toby:

"He was so patient, and he was steady... the night that my dad died, I thought to myself, 'We're done. We won't come back from this.' And then I thought, 'OK, maybe they can. Maybe one day.' Not because they needed him less, but because they were built of stronger stuff than I was. And for 20 years, I thought very little of myself. And then this big, old guy with this big, old heart came walking into my support group. And when I would break, he never gave up on me... he made me believe in me. Do you know that you changed my life? That you saved my life?"

Kate's blaming herself in Jack's death made her self-esteem the lowest, and now that she has Toby, she can believe in herself again. She can believe in herself because she sees herself reflected in Toby, and what Toby sees of Kate is pretty great. Is this all that Kate should do? No — a licensed therapist would probably do wonders for Kate to work through all of her issues with Jack and his death — but recognizing a problem is an important first step in solving that problem.