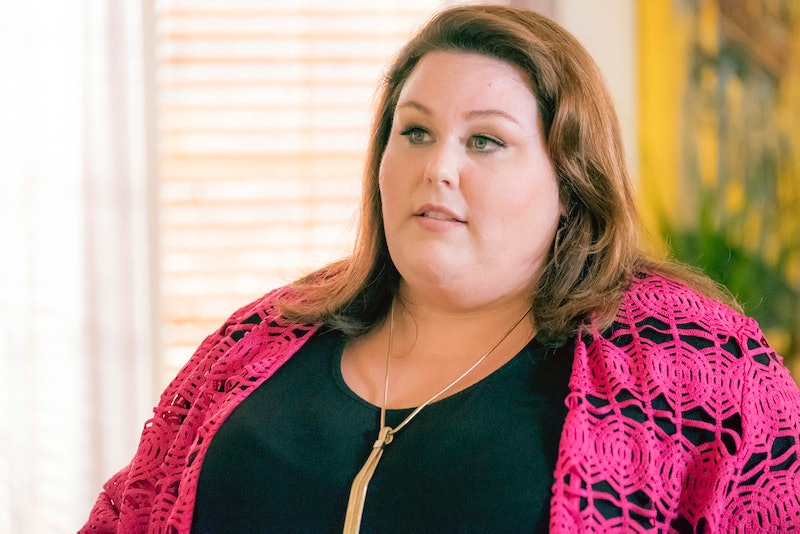 Season 2 of This Is Us started things off with a whopper — the reveal that Pearson patriarch Jack may have died in a house fire. But it’s probably so much more complicated than that simple ending would have you believe. And, shocking premiere ending aside, the show has since pulled back from providing giant clues and focused more narrowly on character drama again. As the second episode showed, Jack’s alcoholism relapse caused problems in his home, and they affected his daughter, Kate, deeply. We learned in Season 1 that Kate feels guilty about Jack’s death on This Is Us — so perhaps her relationship with him and his alcoholism played a role. If that's true, though, she has nothing for which to blame herself.

In Season 1, Kate shared a little bit about Jack’s death to Toby. She said that her father died because he got sick, and that she blamed herself for his death. If Jack was sick — which he was, because alcoholism is a disease — how could Kate be at fault? It doesn’t make sense. In the Oct. 3 episode of This Is Us, more of the story trickles out. When Jack was originally trying to stop drinking in the '80s timeline, instead of having a drink during lunch, Jack went to the kids’ school, spotted Kate on the playground, and hung out with her for a bit. While he didn’t say exactly what was going on (it would be hard to tell your nine-year-old that you’re an alcoholic), Jack and Kate shared a tender moment in which she intuitively told him that everything was going to be all right.

Flash forward about a decade to Jack’s relapse — instead of hiding it this time, Jack thought it best to tell his family what was going on so he could get proper help and attend meetings. He told Kate before her brothers, and they shared the same embrace as last time, with her hands on his face, assuring him that everything would eventually be OK.

Based on the timeline of what has already happened on the show, Jack must have died soon after his confession to Kate. Viewers don’t know the specifics of Jack’s death yet, but extremely unlikely for her to have directly killed her father. She may feel responsible for what happened to him, but if Jack died from alcoholism-related effects, she had nothing to do with it. There was no way that she could have prevented him from hiding bottles in his desk and drinking at lunch. It also wasn’t entirely fair for Jack to depend so much on Kate, whether he intended to or not. She was just a kid at the time, and how was she supposed to help an adult man — her father — get help for a disease she barely understood herself? It’s easy to see why Kate could feel guilty, perhaps like she let her father down, but that’s not the case. She did the best she could.

Season 2 is already very Kate-focused and, according to Chrissy Metz, who plays her, the upcoming episodes will bring more breakthroughs from Kate. She told Entertainment Weekly in September:

“We know that her life has been sort of dictated by the trauma and the guilt that she’s held for so long. And at the weight loss immersion camp, [she] discovered that she had to start talking about it, to even get to the guilt and the trauma of it all to actually overcome it. So everything that Kate is doing is to push through the pain, to be courageous, and to really speak up for herself and really draw her boundaries, and having the life that her father always believed that she could have.”

Kate’s life has been dictated by her guilt, and that’s something that, if Jack had been in his right mind, Jack would have never wanted for her. It was never fair for Jack to lean on Kate so much to deal with his alcoholism, and unless she's referring to a different kind of "sickness" or something else viewers don't yet know about, she's not responsible. Sadly, she’s carried this blame with her her whole life — but it's really time for her to let it go, because it's not the responsibility of a teenage girl to guide her father through an illness like this, and she cannot blame herself for how things turned out.

More like this
Who Is Liam Neeson's Character In The Obi-Wan Kenobi Finale?
By Kadin Burnett
Only Murders In The Building Introduces 4 Suspicious New Characters In Season 2
By Kadin Burnett
Here's Where Your Favorite Characters Stand After The 'Stranger Things' 4 Finale
By Grace Wehniainen
The Stranger Things 4 Soundtrack Spans Classic Eras & Styles
By Brad Witter
Get Even More From Bustle — Sign Up For The Newsletter