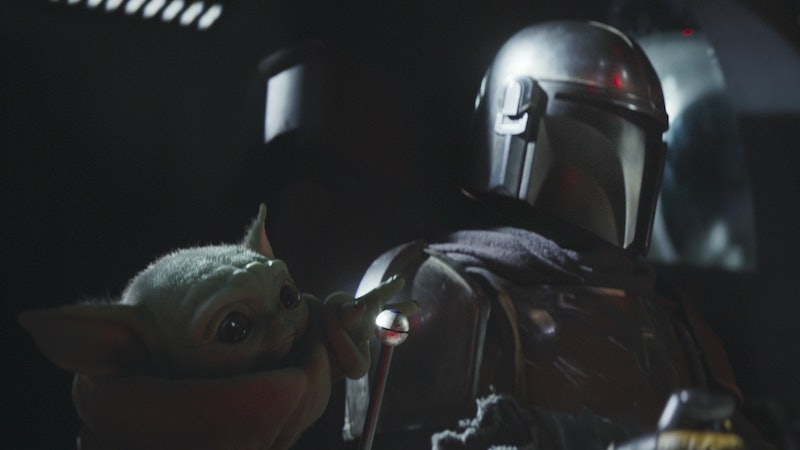 Three episodes in to The Mandalorian, and it's still unclear what the Empire wants with Baby Yoda. Of course, that's not really his name, but it's nonetheless what the Internet has taken to calling this green little guy until his name is revealed. Whatever the case, Episode 3 reveals the titular Mandalorian (Pedro Pascal) abandoning the Code of the Guild in favor of his conscience as he rescues "The Kid," as he calls him, from his wealthy client (played by Werner Herzog).

Their plans for Baby Yoda were unclear, but that they didn't seem to care whether Baby Yoda was returned dead or alive certainly raised red flags. Audiences know that both the Client and Dr. Pershing (Omid Abtahi) are with the Empire and that they went to great lengths (and great cost) to procure the teeny alien baby. But when the Mandalorian asked what they were going to do with him, The Client dodged his question. Later, the bounty hunter overheard Herzog's character telling Pershing, "I order you to extract the necessary material and be done with it."

As far as viewers know, the doctor has been trying to keep Baby Yoda alive — or so he told the Mandalorian. "I protected him!" he said after the bounty hunter crashed their headquarters. "If it wasn't for me, he would already be dead!" However, he could certainly just be trying to save his own hide.

While nothing explicit is revealed in Episode 3, there are some clues as to what the Empire is up to. Polygon pointed out that the symbol on Pershing's uniform sleeve also may have showed up in Star Wars: Episode II — Attack of the Clones. In the 2002 prequel, audiences saw young clones on the planet of Kamino, who sported a symbol similar to the one Pershing wears in The Mandalorian. If they really are one in the same, then the Empire may want to do something cloning-related to this lil' guy. Either he's a clone of Baby Yoda, Polygon theorized, or the Empire wants to clone Baby Yoda.

Another credible theory comes from Screen Rant, who suggested that the Empire wants to harvest Baby Yoda's midi-chlorians (remember? The genetic material that showed up in the Star Wars prequels to needlessly explain how the Force worked?).

Screen Rant theorized that the Empire was extracting midi-chlorians from Baby Yoda in order to inject into other individuals, thus artificially giving them the Force. This would certainly explain "the necessary material" that the Client wanted them to harvest, and audiences already know that the teeny-tiny creature can use the Force at the tender age of 50, which points to him becoming even more powerful as he grows up.

But whatever the Empire ultimately wants with the adorable creature, audiences will likely find out soon enough. But until then, turning out to be an exciting season, this is.