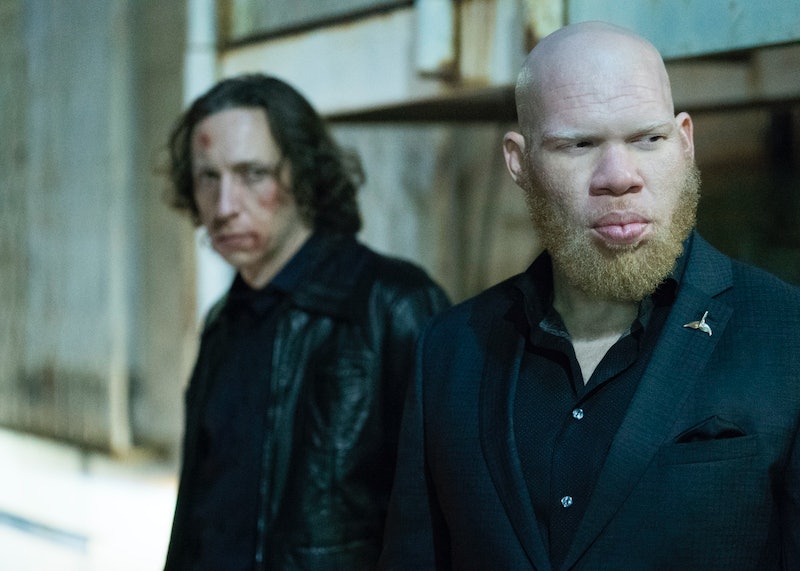 Spoilers for the Feb. 27 episode. Every time Tobias Whale comes across the screen on CW's Black Lightning, (executive producer: Mara Brock Akil) he's up to something sketchy. And when he showed up to star track student Khalil's hospital room unexpectedly one night, viewers should've known that things were about to take a turn for the worst. Alas, they did in "Three Sevens: The Book of Thunder," when Khalil was seen riding alongside the crime lord through the streets of Freeland. But what does Tobias want with Khalil on Black Lightning? It's clear that Tobias is after the community superhero, although his plan to capture Black Lightning might just backfire.

It's no secret that Black Lightning and Tobias can't stand each other. They know it and everyone around them knows it too. And each one is trying to kill the other, though they have yet to come face to face with each other. Despite Gambi's pleas to leave Tobias alone, Jefferson sets out to kill Tobias once and for all after indirectly learning that he was still around thanks to the presence of Tobias' right-hand-man Joey Toledo.

After arranging for Tobias to meet with his doctor one night under the guise of an emergency, Jefferson prepares to blast his nemesis from the roof of a building. But after a plea from Lynn, Jefferson backs down. Big mistake. By not killing Tobias when he had the chance, Jefferson might have allowed a new monster to be created a.k.a Khalil.

Understandably, Jennifer's boyfriend Khalil has been in a bit of a funk ever since he was shot at a peace rally and learned that he may never walk again. Though Jennifer has tried to remain friendly and supportive, Khalil has constantly pushed her away. And meeting Tobias didn't help their relationship one bit. Neither did the social media shade Khalil threw at her this episode insulting Jennifer's hair and dancing skills.

After getting the idea from his sister Tori, Tobias decides to use Khalil and convince him that Black Lightning is to blame for the shooting that rendered him paralyzed. Although, as viewers know, the person who Khalil really should blame is Tobias for pulling the trigger. Still, the pitch that Tobias made to Khalil at the end of "Black Jesus" about taking away his pain, offering him loads of money and giving him a sense of power, would be tempting to anyone — especially someone who'd just lost the one thing that gave them a shot at a better life.

And Tobias thinks he's got a one-up on Black Lightning in this week's episode when Khalil succumbs to his whisperings of sweet nothings. It's still unclear of how exactly Khalil be ushered into Tobias' scheme, but my money is on him officially joining the 100 gang. With Lala gone and the younger members dropping like flies, thanks to Black Lightning could be just what Tobias needs to lure his enemy out of the shadows.

Unfortunately, Tobias is missing one major detail. Black Lightning isn't just Black Lightning. He's also a father named Jefferson Pierce. And based on the way Khalil's been treating Jefferson's youngest daughter Jennifer, Black Lightning probably won't be too concerned about coming to save him or fight him anytime soon. So, luring Black Lightning out in public under false pretenses is a most-likely a no-go for Tobias. Additionally, swaying the public's opinion of Black Lightning won't be a walk in the park either.

Much like his alias Jefferson Pierce, the majority of the community sees Black Lightning as a hero. Sure there have been some casualties here and there (i.e. Khalil), but Black Lightning has rescued way more people in Freeland than he's hurt over the years.

If anything, Tobias' charade involving Khalil is going to do nothing else besides piss Black Lightning further off. And messing with the Pierce family is the last thing Tobias wants to do right now, especially when Jefferson and Lynn just found out that someone else in the family has got superpowers too.