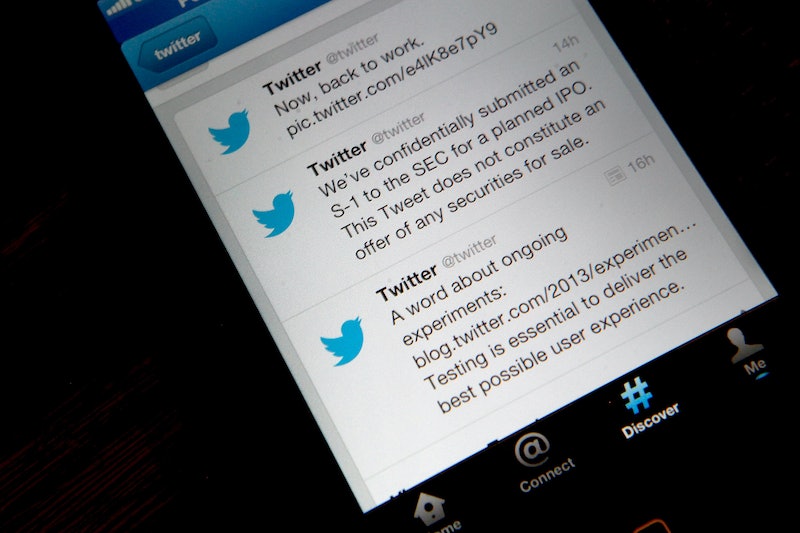 If you've always felt like Twitter's former 140 character tweet limit ends up leaving you wordless, you're going to like the change the company is rolling out: After testing out the feature with a select group in September, character limits are officially being increase to 280 for users. Now, you've got an extra 140 characters to play with, making it a lot easier to speak your mind without having to edit your thoughts down. But if you're wondering why you don't have 280 characters on Twitter yet, don't worry — it's not because the social media gods have neglected you. As with all big social media changes, it takes time to reach everyone's phone.

In September, the company tested out the new character limit with a select group of users to see how it played out. In fact, the former 140 characters was just an arbitrary number that the company chose based on the approximately length of a text message in the first place, Twitter revealed on Tues. They thought tweets should be about as simple as a text message, but other than that, there was no magical reason they there was a 140 character limit. So the change really shouldn't ruffle too many feathers from the change police.

As it turned out, according to Twitter, only five percent of tweets sent from people in the test group were longer than the original 140 characters, and just two percent were over 190 characters. Meaning that for the most part, people are fine with the tight constraints of the 140 characters. In fact, we'e apparently learned how to really shave down our thoughts to the bare minimum, meaning that the update might not show much of a difference in your newsfeed.

So if you're worried that you're going to have to scroll through a clunky mess of overly verbose Tweets by your friends, relax. Your Twitter feed will likely look exactly the same as it usually does, save for the occasional longer tweet that you're happy to read. According to the data from the trial, most of your friends will continue to make concise tweets. The 280 character limit will likely only be used when absolutely necessary, as the novelty of brevity is one of the key features and characteristics of Twitter. That said, the company believes that the 140 character limit had discouraged many users from actively using their Twitter accounts, and they're hoping that by increasing the character limit, people who were discouraged by the limit, will feel more inspired to tweet, now. Hopefully with less pressure to be profound with few words, more people will warm up to the social media platform and add their voice to the chorus.

If you're someone who is really excited by the added characters in the update, but you're not seeing the option on your app, you're probably freaking out. Don't worry, you haven't been left out of the update: Twitter expects most of its users to have access to the extended tweets by this evening, due to a gradual roll out meant to reduce technical issues. I mean think about it — if everyone tried to update their Twitter at the same time, the internet would probably freeze. In the same way that you shouldn't rely on a hot shower during the morning winter rush in an old apartment complex, you probably shouldn't rely on an accessible update on social media right away. So take a few deep breaths, log in, log out, quit the app, reopen the app, and check for updates. New 280 character tweets are coming your way, whether you're ready for them or not. So start expanding your thoughts, literally.