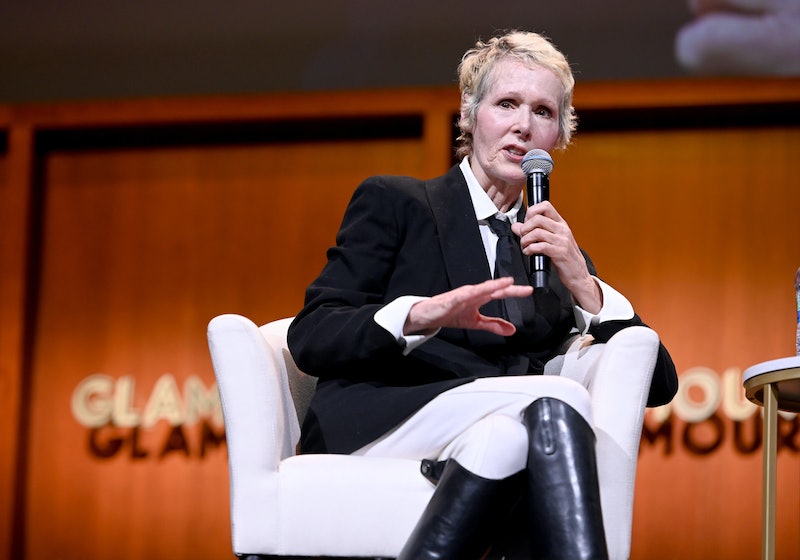 As of October 2019, 25 women have publicly accused President Donald Trump of sexual misconduct, as Business Insider reported, with the alleged incidents occurring as early as the '70s and as recently as 2016. Many of the women who allege that Trump assaulted them cannot pursue legal action against him because the statute of limitations, or the legal time limit for when they'd have to file a suit, has run out. (Trump has also denied all of the claims.) But E. Jean Carroll, a writer who accused Trump of sexually assaulting her in the mid '90s, is now suing him for defamation after he denied her accusation, and also alleged that she was conspiring with Democrats. Here's how a defamation lawsuit works, and what the lawsuit could mean for Trump, but also for other women who accuse powerful men of assault.

Carroll described her alleged assault in graphic detail in a June 2019 New York magazine article, which is an excerpt from her book What Do We Need Men For? A Modest Proposal. She says that Trump raped her in the dressing room of a department store in Manhattan in the mid '90s; she says she managed to push him off of her a few minutes into the incident and run away.

On June 22, the day after the article was published, Trump called the accusation "totally false" and said "I have no idea who this woman is," according to CNN. Though Trump claimed he had never met Carroll, the New York magazine article includes a photo of the two of them at a party together in the '80s. After being asked about the photo by a reporter, Trump reiterated that he didn't know Carroll. He also said he didn't rape Carroll because she wasn't "his type," according to The Guardian.

On Nov. 4, Carroll filed a lawsuit against Trump for defamation, arguing that his responses to her accusation were false and damaged her reputation and her career, according to The New York Times. Carroll's defamation lawsuit, filed in New York State Supreme Court, says Trump's response to her allegations “are fully consistent with his tried-and-true playbook for responding to credible public reports that he sexually assaulted women,” according to the Times.

Defamation is a statement that hurts someone's reputation, according to Cornell Law. Usually, defamation lawsuits related to sexual assault accusations happen the other way around — a person accused of sexual assault sues the accuser for defamation — so sexual assault survivors and activists are receiving Carroll's symbolic lawsuit as a powerful victory. Guardian US columnist Moira Donegan wrote that law enforcement often doesn't take women's assault or harassment claims seriously, and, in the rare instances survivors report to police and pursue legal action, defense attorneys in court rooms can subject them to character assassination, among other belittling and re-traumatizing tactics. Donegan wrote that Carroll's lawsuit assumes that women "who accuse powerful men of sexual violence, are entitled to all the same legal protections men are."

Carroll's lawsuit states that Trump "through express statements and deliberate implications, accused Carroll of lying about the rape in order to increase book sales, carry out a political agenda, advance a conspiracy with the Democratic Party, and make money," according to NBC News. Carroll says in the lawsuit that her advice column for Elle magazine has received 50% fewer letters from readers, and she believes it's because they don't want to write to someone that the president has called a liar, the Times reported. Bustle has reached out to Trump's attorney for comment.

Defamation attorney Christy Eikhoff told Business Insider that Carroll's case has a "solid legal footing," and that the biggest barrier her legal team faces is convincing the jury that the assault happened. The other barrier they face is that Trump is the president.

Summer Zervos, a former Apprentice contestant who has accused Trump of groping her, also filed a defamation case against Trump after he denied her claims. Trump's legal team tried to get the case thrown out using the Constitution's Supremacy Clause, which states that state laws (or lawsuits like Zervos') can't interfere with or come before federal laws or the functions of the federal government, according to Cornell Law. A New York State judge and an appeals court ruled against Trump's team, writing, "No one is above the law,” in his decision.

That ruling, combined with the "solid legal footing" Carroll's team has might bode well for the case, but Eikhoff told Business Insider that probably won't matter, because Trump would likely settle the lawsuit. A judge ruled on Nov. 13 that Carroll could mail her complaint to the White House after secret service agents reportedly prevented her from formally having it served in person.

However the suit ends, Carroll has a powerful reason for filing it, aside from wanting to hold the president accountable. “I am filing this on behalf of every woman who has ever been harassed, assaulted, silenced, or spoken up only to be shamed, fired, ridiculed and belittled,” Carroll said in a statement. “It’s for every woman who can’t speak up because she’ll lose the job she needs to support her three kids.”

More like this
25 Inspiring Quotes From Black Women To Celebrate Black History Month
By Kyli Rodriguez-Cayro and JR Thorpe
24 History-Making Black Women You Probably Didn't Learn About In School
By Ayana Lage and JR Thorpe
Eurovision Has Been Given A Whole New Look Ahead Of Its Liverpool Debut
By Bustle UK
Savannah Guthrie Got Her First-Ever Tattoo With This Former Wild Child
By Suzanne Zuckerman
Get Even More From Bustle — Sign Up For The Newsletter
From hair trends to relationship advice, our daily newsletter has everything you need to sound like a person who’s on TikTok, even if you aren’t.