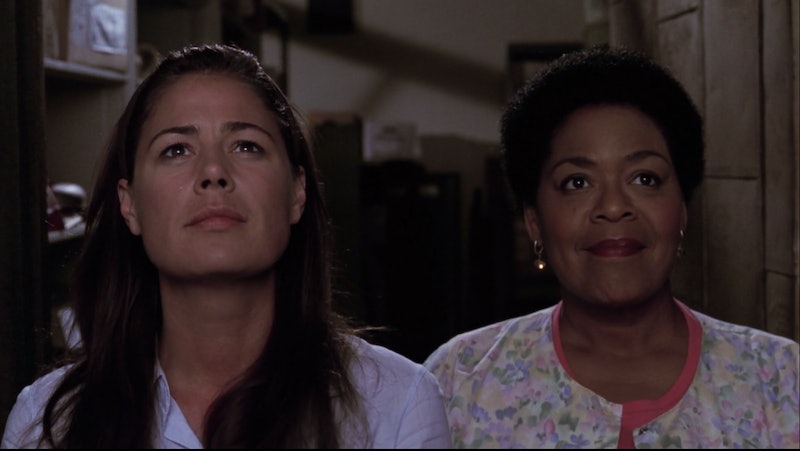 Nurses are the underappreciated powerhouses of the medical field, even on TV. Throughout the 15 seasons of the iconic medical drama ER, nurse Haleh Adams (Yvette Freeman) was there through it all — standing up for her fellow nurses and mentoring young doctors, all while going virtually unnoticed. But while she may not have gotten the glory that, say, a John Carter was afforded, it's painfully clear now, 10 years after ER left the air, that Haleh was the unsung hero of the emergency room.

"I've been doing this job for 17 years, honey," Haleh told Abby Lockhart (Maura Tierney) in Season 9, Episode 6. "Doctors come and go, but nurses make this place run. We don't get much credit or pay. We see a lot of misery, a lot of dying, but we come back every day. I've given up being appreciated, but I sure as hell won't let any of us be taken for granted."

Sadly, Haleh was taken for granted within the ER universe, even though she appeared in both the show's pilot and finale, a feat that few characters can claim. It often felt like Freeman's performance was underappreciated, too. However, there were some fans who were so convinced by the actor's take on the character that they believed she really had a medical license. "To this day, people think I'm a nurse," Freeman said in a behind-the-scenes video for ER Season 3. "They think I carry around a stethoscope in my little purse."

Thankfully, more and more audiences have begun to recognize the importance of both Freeman and her character; The Atlantic, for one, listed Haleh 10th out of 45 in its 2015 ER character ranking, which speaks to her quiet power. Because the nurses were never given much backstory on the series, that meant their small scenes had to be all the the more impactful, which hers often were. "Haleh is probably the most memorable of them all," David Sims wrote in the Atlantic piece, referring to the rest of the show's nursing staff, "and was guaranteed to know what to do better than 95 percent of the people she was in a room with at any time."

Just take what happened when some of Haleh's colleagues became doctors. She was heartbroken that her coworkers switched sides, but she didn't just sit back and mope. When Carol Hathaway (Juliana Margulies), for instance, started rising in the administrative ranks and was forced to make some unpopular budget decisions, Haleh expressed her fury with her for endangering her fellow nurses' livelihoods.

Haleh even stood up to doctors who tried to underestimate her abilities. In Season 1, Dr. Benton got upset at her for filling out his chart before realizing that she was doing him a favor. She didn't doubt her savvy for one second, though, facetiously telling Benton that she was "not comfortable taking verbal orders" and that he should write his own charts from now on. In Season 12, meanwhile, when chief nurse Eve Peyton cracked down on the nurses' hours, Haleh defied her boss by filing her accurate amount of work, causing her to get briefly fired. Fortunately, management soon realized their errors, and Haleh was back within a matter of weeks (and thank goodness, she told them, because her husband was driving her crazy).

Watching so many people arrive after Haleh and soon pull ahead of her was frustrating, but the nurse stood strong through it all, becoming the emergency room's bedrock and ensuring the department couldn't work without her. But more than simply making the ER run smoothly, Haleh was the show's heart and soul. Nowhere was this more clear than in the Season 15 episode, "The Book of Abby," which depicted the character's last day at County General. At the end of Lockhart's shift, Haleh led her to a dusty storage room, where all of the former staffers' name tags were lovingly displayed on the brick wall. Some of these people had died, but others had simply moved on to better things. Thanks to Haleh, Abby got to add her name to the wall.

The nurse's attitude and work ethic may not have always been appreciated, but some people did take notice. In one Season 12 scene, in which she gave Ray Barnett (Shane West) his evaluation, the cocky doctor became belligerent, to which Dr. Lewis retorted, "Haleh has been here longer than anyone — she knows what she's talking about." And the experienced nurse knew how to punish young doctors when they forgot who she was. "My first week in the ER, I forgot Haleh's name and called her nurse," Dr. St. John said in the series finale, causing the other nurses to exchange nervous glances. "I said, 'Nurse, can you get me some more 4x4s?' So anyway, Haleh decides to punish me by paging me for Tylenol orders every 20 minutes!"

"It takes a lot to be a nurse," Freeman said in the behind-the-scenes ER interview. "It takes knowledge, it takes compassion, it takes strength, it takes putting your own life aside to deal with someone else's problems."

Haleh did all that and more, from having to wake up intimidating, sleeping doctors to teaching terrified interns how to start IVs, day in and day out. It was fitting, then, that in the ER series finale, "In the End," Haleh headed home after a long shift. "Tough day?" desk clerk Jerry asked her. "About the same as every other," Haleh told him, matter-of-factly. While many of her friends had moved on from County General, Haleh wasn't going anywhere, just prepping herself for another long, under-appreciated day at work.