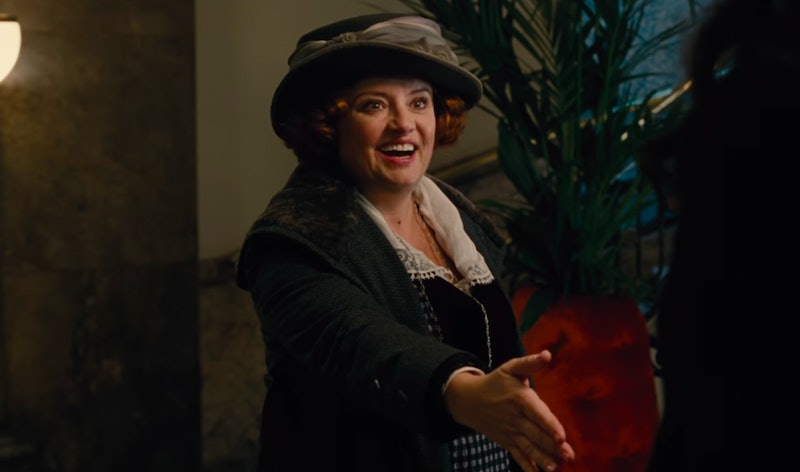 Wonder Woman, the first major superhero film from both the DCEU (DC Extended Universe) and the MCU (Marvel Cinematic Universe) to feature a female superhero in a leading role, is one of the most highly anticipated movies of 2017. And, while I'm super pumped to see a woman kick ass on the big screen and take the lead in her own story, I'm equally pumped to see said woman's awesome sidekick, Etta Candy. Etta Candy is only seen briefly in the trailers for Wonder Woman, but she totally steals the show. Based on what I've seen so far, it's obvious that Etta Candy will be the best part of Wonder Woman, and here's why.

1. She's Not A Superhero

Etta Candy isn't an alien or billionaire with a lot of toys — she's not a traditional superhero. Etta is just a regular woman, making a living as a secretary, who happens to have the spirit of a superhero. Every superhero origin story has a bit of the everyman trope (think Steve Rogers in Captain America), but having an actual everyman — or everywoman, as the case may be — in Wonder Woman helps hammer home the idea that anybody can be a superhero.

2. She Loves Her Body

Etta Candy loves her body. She is unashamed of her curves, and doesn't allow anyone to turn her body into an insult against her. In the comics, she once had a storyline that put her into Wonder Woman's body — and she couldn't wait to get out of it, via io9. Seeing a female superhero on screen is inspiring, but seeing a badass woman with a body not usually celebrated in Hollywood is equally important.

Etta Candy's presence in Wonder Woman (hopefully) shows a commitment to portraying female friendships in an honest and fun way. Superhero movies tend to celebrate male friendships and partnerships, but Etta and Diana's relationship will break that mold. Furthermore, Wonder Woman and Etta's relationship celebrates women who support each other, and that's something I can't get enough of.

4. She Doesn't Live Her Life According To Male Standards

Etta has been subject to the patriarchy since birth. And yet, Etta has the same spirit of independence and self-determination as Wonder Woman — a woman who grew up on an island without men. In other words: Etta Candy DGAF about male opinions, male standards of beauty, or limitations placed on her as a woman in a male-dominated society.

Over the years, Etta has taken many forms. She's been white, black, plus size, thin, a secretary, an ARGUS agent, a U.N. agent, and a commander in the U.S. Air Force, via io9. No matter what she looks like or what her job is, Etta is always one thing: completely herself.

Etta Candy is a lot of things, but a pacifist is not one of them. Over the course of the comics, Candy is often shown jumping straight into battle. She's not content to sit on the sidelines. And I think we can all agree that two women in the battlefield are better than one, even if only one of them has superpowers.

If for some reason you failed to recognize Lucy Davis in the Wonder Woman trailers, or you simply don't know who she is, let me enlighten you. Davis, who plays Etta Candy in the film, is a British actor best known for playing Dawn Tinsley in The Office, the original Pam in the British version of the show. She also starred in Shaun of the Dead, and had a great supporting role in the short-lived Studio 60 on the Sunset Strip. Most recently, she had a recurring role on Better Things. In other words: she's hilarious and talented and we're blessed to have her as Etta Candy.

Etta Candy, I'm ready for you to steal the show and steal my heart. Wonder Woman cannot come soon enough.