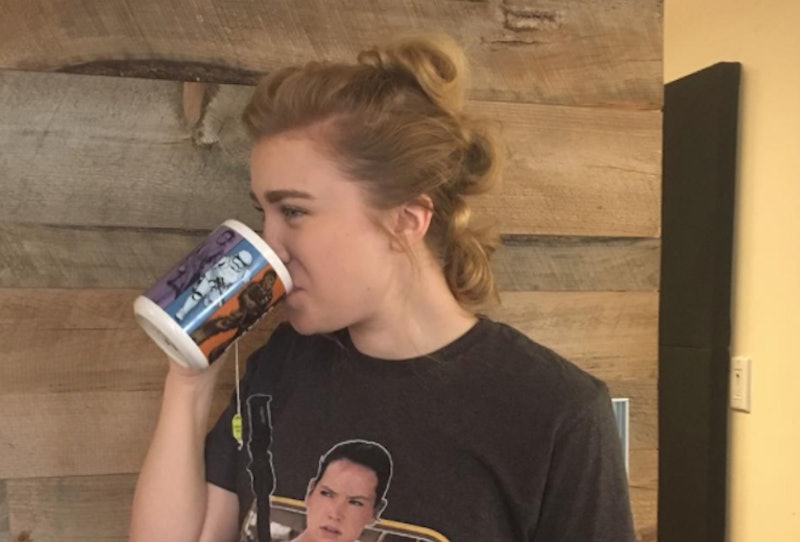 I was 11 years old when I set up my first fan fiction account online — for a self-insert Harry Potter fic, because of course. I was technologically incompetent and had no idea what the difference between "upload" and "download" was, so I clicked around aimlessly for about an hour before employing the help of my little sister, whose computer knowledge already eclipsed mine. She helped me post my first chapter, then promised to help me upload the second one the next day, and as she was leaving me to the rest of my "turn" on the family's desktop computer, my chest seized with a distinct kind of panic: "Don't tell anyone."

She was nine, but that punk knew the score: "I won't."

Fourteen years and more than three million words of fan fiction written later, and I'm still trying to understand where that original sense of shame came from. See, I didn't really know what fan fiction was before I started writing it. I was filling entire notebooks with the adventures of Merry and Pippin from Lord of the Rings years before I ever knew there were people online, doing the same for their own fandoms. My parents were ridiculously encouraging of my nerdy shenanigans, and I'd never heard anybody talk about it before, but even then, I was mortally embarrassed by what I was doing in a way I couldn't articulate — not in my preteen years, when I was brand new to it; not in my teenage years, when a male classmate of mine somehow found my username and threatened to tell everyone, and I went home and promptly burst into tears; not even at 21, when I had the most popular fic in a fandom and somebody asked to interview me for their website, and my first, heart-stopping reaction was, NO!

Of course, I see now that both my eagerness to write fan fiction and my shame for it were borne of the same thing: a large amount of fan fiction is centric on female desire.

I didn't always write fic with romantic themes, but what I wanted at 11 was much different than what I want now at 25. But although the specificity of what I want in a fan fiction has evolved over the years, the core of it has not: I want to be in control of a narrative, to tilt it in a way that pleases me most. Whether it was nonsensical adventures in the Shire as a kid or full-on Star Wars shipping as an adult, I want to see the things that I want brought to life by my own hand, brought to life by the hands of others — and for some reason, I have always been embarrassed by it.

Women have been historically shamed for owning their desires, but while we recognize that, overcoming it remains an uphill battle. We still see it in the stigma on romance novels; in the amount of porn aimed at women compared to the countless versions made for men; we see it in desires as practical as asking for a raise, which women pay a much higher "social cost" for doing than men. Whereas men's desires are typically more celebrated, women's are still often cast in this conciliatory light — if we pursue them, there is often an air of apology for them first.

The fan fiction world has certainly seen its fair share of this kind of stigma. Most recently, we've seen it play out in the public sphere with the two most popular adapted fan fictions of the past few years, 50 Shades of Grey and After (a Twilight and One Direction-centric fan fiction, respectively). Their successful sales did nothing to curb the widespread mockery among their unintended audiences; obviously the media is being consumed, but the critics have effectively silenced the consumers from speaking out, for fear of ridicule.

The two most "famous" fan fictions aside, the shame associated with fan fiction originated long before these works reached readers outside of their usual sphere. Unfortunately, fan fiction at large lends itself to mockery in a much safer and subtler way than other forms of female desire-driven works: the writers are, for the most part, anonymous and unpaid, with little training. They are often young women, subjecting the works to the same dismissive attitude society frequently takes over things that young women enjoy. And while there is a wide range of writers and types of fic on the internet, a majority of fic — the fic that most people are aware of — is written primarily by women, for women, holding it to the kind of scrutiny from people who do not consume it that makes it all too easy to mock.

In fact, it is no coincidence that there are far fewer men than women in the fan fiction world. MIT's Henry Jenkins, the author of Textual Poachers, theorized as early as 1992, decades after the dawn of Star Trek fan fiction, that fan fiction was so popular among women because it helped them create their own narratives in a world where media mostly catered to men. We see it in the popular tropes on fan fiction, from the coffee shop AUs to the explicitly sexual fics to the good old-fashioned hate-to-love relationship. And while we live in a world now where plenty more media caters to women, we do not live in a world that has stopped shaming women for wanting the things that we want in it; even now, women face shame for writing the very content that was meant to empower them.

If you don't think that fan fiction shaming in particular is a feminist issue, then consider what we're really doing when we shame fan fiction writers: we are shaming women — often young women, who are just starting to get a sense for what they want not just in a narrative, but in their adult lives — for expressing their desires. We are setting up women to apologize for their writing before it even leaves the keyboard. We are attacking them not only personally, but professionally; we are discouraging them owning a part of themselves, and from profiting from it, should they ever decide to write their own original work down the road.

More than that, though, we are discouraging them from engaging in the incredibly diverse and open learning environment that fan fiction provides. Fan fiction has historically been a safe place to experiment with and read about all kinds of romance — no matter the gender or the orientation, be it the cheesiest trope or the most specific kink. It is a place without judgment, and a place that introduces young writers to perspectives outside of their own — sometimes normalizing diverse relationships for writers who would otherwise not be exposed to them, ultimately making them more accepting and empathetic not just as writers, but as human beings.

With that in mind, it is all the more disheartening that the judgment of others so critically affects the writers and readers of fan fiction, which itself is such an open, nonjudgmental place. But once that misplaced shame is there, it never really goes away. Even now, fully aware of the root of my feelings, I see it in motion in myself and the people around me. I write my own fiction now, and whenever somebody asks about it, I frequently preface any plot descriptions with "it's silly," or "it's dumb". I hide my fiction writing with the same kind of crippling embarrassment that I shielded my fan fiction usernames. And I hear the same apologies from other female writers everywhere I go — be it with other fic writers on Tumblr, or fiction writers who write in genres targeted at women that I meet out in the real world, there is all too often a disclaimer to soften any exchange of their work. The very work that should empower us and embolden us, the same work we feel safe celebrating in anonymous corners of the internet, often makes us cower in the light of day.