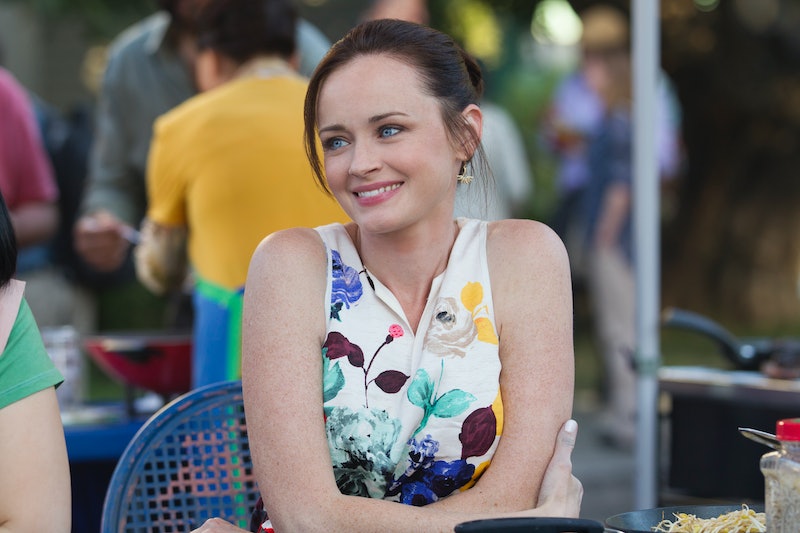 In its own way, Gilmore Girls was a work of art — the Sistine Chapel of television. Ignore all the residual snootiness you get about a show that focuses on two women and their love lives (rather than, being, say, a show about the psychological state of a mob boss or a cop in Baltimore), forget the haters — it tackled its subjects masterfully. So sure, it stings to admit that I don't want any more new episodes of Gilmore Girls. Like most sane teenagers with access to a TV in the mid '00s, I was addicted to Gilmore Girls and was heartbroken when it ended.

When Netflix announced Gilmore Girls: A Year In The Life and news started to filter in about the 2016 reboot — that we'd get so many of the original actors back, that Amy Sherman-Palladino would be there — I got cocky. I felt that it was impossible that the reboot could fail. Almost all of the ingredients that had made the show so compelling in the first place would still be there. Plus, potentially the actors would be even more watchable, having had extra years to hone their craft. After all, Alexis Bledel had been a vision to watch when she had played Rory at just 19 years old and I felt she would only be a stronger actor.

Bledel wasn't, in fact, as watchable as the adult version of her former role as she once had been. But that wasn't the bone I had to pick with the 2016 edition of the show.

No, the real issue was the lack of continuity in terms of character development. Let's start with the youngest Gilmore girl. If you were Team Rory back in high school, that was probably because you admired her work ethic. Despite her immense privilege (impossibly wealthy grandparents, a mother that gave her a lot of freedom), she wasn't spoiled. She was likeable because she was so great at taking an almost impossible situation — becoming friends with the emotional hedgehog that was the spiky Ms Geller, writing about the school parking lot — and not just making the best of it, but making that situation rock. So 2016 Rory was a bitter pill to swallow.

I get it: journalism is an incredibly competitive field. But our would-be scribe wasn't just phoning it in, she was barely even present. When given an opportunity to dazzle the good folks at GQ, when not simply invited to pitch them, but actually given a detailed outline of a piece they want (and what a gift and a privilege that is for a journalist, to not simply blindly pitch a general editorial email address and hope you'll strike gold), she falls asleep while interviewing a source. Who does that? Oh yeah, and our ultra professional freelancer also sleeps with another source. These are basics. Even an intern committing these mistakes would probably get fired. It's hard to square the high school student of yore, the straight A scoring go-getter, with this incredibly apathetic version of Rory.

But wait, you say. That's because journalism isn't her fate. Being some sort of novelist/memoirist mash up is. Really? I don't buy it. Because we don't see Rory in high school or college penning short stories or personal essays. She was never a Hannah Horvath from HBO's Girls. She was all about that scoop, digging deep until she found an interesting story in the world around her.

And it wasn't just about the former straight A student's career. Her approach to her love life felt lightyears away from the Rory we knew. Lorelai's daughter was, above all things, considerate and kind. The idea that a grown-up Rory would stay in a relationship with a man she was so indifferent to that she constantly forgot he existed didn't feel realistic. And the former golden girl had self-respect: sure, she slept with Dean when he was married, but she eventually realized how messed up that was. Would a thirty-something Rory really have let herself be strung along for months at a time by an old boyfriend who now had a fiancee? I don't think so, but yet that's what she did.

Which brings us to Lorelai. The elder Gilmore wasn't just Rory's best friend, she was her moral compass on the rare occasions her daughter messed up. So the inn owner's incredibly restrained reactions to her daughter constantly forgetting about Paul, her boyfriend of two years and sleeping with her ex-boyfriend, someone with a fiancee, also felt like an Invasion of the Body-Snatchers moment. I mean, Lorelai Gilmore of 2016 must have been an alien plant spore in a Lorelai-shaped form, right? How else to explain her going from freaking the hell out over Rory sleeping with Dean when he was married to her being nothing more than mildly surprised that Rory and Logan were still in contact? Nope. Don't buy it.

There is, of course, a fairly good argument as to why all these changes were legitimate. Perhaps Sherman-Palladino felt that a reboot should appeal to both fans and newbies and that half of the charm of a reboot would be to update the series to make it feel more contemporary. Perhaps it made sense to appeal to the show's target audience — millennials — by altering Rory a little to make her more like a typical millennial.

Due to the whole forgetting-about-having-a-boyfriend-thing, Rory is effectively single. According to a 2015 Gallup Poll, 64 percent of millennials are single in comparison to 52 percent of the same age group in 2004. That leaves our thirty-something is flaky about dating because she's reached adulthood in an age of hookup apps and when ghosting is prevalent. Plenty of Fish reported in 2016 that 78 percent of 18-33 year olds have been ghosted on at least once. Our favorite Yale graduate is lost at sea when it comes to her career because she had her heart set on being a newspaper woman, not a blogger, but graduated to an economy in which the newspaper industry was in decline.

The problem with all this is that none of these qualities feel very convincing when embodied by Rory. She was never the sort of millennial you see generalized about in a thinkpiece. The youngest Gilmore was hardworking, deeply moral, reliable, compassionate. The fact that 2016 Rory is none of those things makes it hard to enjoy the show — it feels like she could be an entirely different character. And the fact that Lorelai is so incredibly chill about her daughter turning out so entitled, the one thing the single mother has spent her whole life battling against being, makes her also seem like a totally different character. This matters: the mother-daughter duo are the pulsing heart of the show. If they no longer make sense as characters, then the show no longer adds up.

We got what we wished for. We got the original actors and the original showrunner. But somehow, 2016 Gilmore Girls no longer reached the dizzy heights of what it had once been capable of. Its warmth, its moral center, its likeable leads were all absent. Which sucks, because we have literally nobody to scapegoat this on. We had everything a great reboot needed and it still felt like an entirely different show.

So, cliffhanger ending and all, why would I want any further episodes? I want enough time to elapse so that I can enjoy the original episodes without thinking of Gilmore Girls: A Year In The Life. I want Rory and Lorelai to make sense again.

More like this
Here’s Why Danny Masterson’s Hyde Isn’t In 'That '90s Show'
By Brad Witter
Mel B Thinks These Celebs Should Play Them In A Spice Girls Movie
By Alyssa Lapid
'Friends' Star Maggie Wheeler Offers Support To Matthew Perry After Reading His Memoir
By Alyssa Lapid
Twitter Is Having A Field Day Over Mr Blobby’s Costume Selling For £62k
By Catharina Cheung
Get Even More From Bustle — Sign Up For The Newsletter
From hair trends to relationship advice, our daily newsletter has everything you need to sound like a person who’s on TikTok, even if you aren’t.