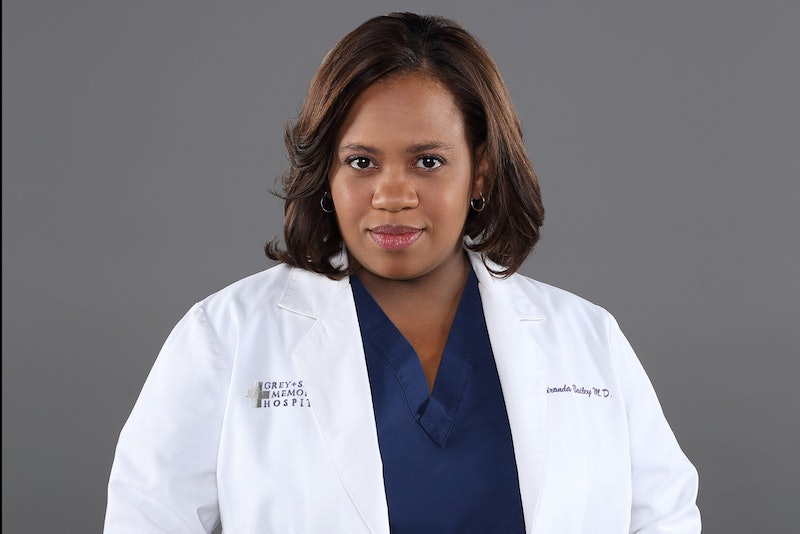 In 15 years of Grey's Anatomy, cast member exits have become as commonplace as Seattle emergencies or Meredith drinking tequila. Yet while some of the actors who've left, like Sandra Oh and Sara Ramirez, went peacefully to pursue other roles, others quit Grey's — or were reportedly pushed out — for reasons a bit more controversial (Katherine Heigl's unhappiness over her character's storylines, Patrick Dempsey's alleged behind-the-scenes drama). Change after change has come to Grey-Sloan Memorial Hospital's line-up over time, but through it all, Chandra Wilson, whose Miranda Bailey — the tough, brilliant, stubborn General Surgeon — has stayed a Grey's constant since the show's very start.

While the majority of her co-workers from Season 1 called it quits years ago, Wilson has no intention of hanging up her scrubs anytime soon. "I really want to see it through," she says of the show, when we speak over the phone, a few days before Grey's Season 15 premiere on Sept 27. "I’ll get into other opportunities and other characters and whatever else comes after this, but I’m enjoying being in the now and being in this right now."

Along with the other few remaining original Grey's stars like Ellen Pompeo (Meredith), Justin Chambers (Alex), and James Pickens, Jr. (Richard), Wilson has been making the rounds recently promoting the series' 15th season, which — according to Pompeo, at least — might be one of its last. "I am really feeling like we have told the majority of the stories that we can tell,” Pompeo told EW when asked about a future for Grey's beyond Season 16. Yet while Wilson is not naive about the show's longevity — "I know that Grey’s will end eventually," she tells me — she makes clear that she'll stay until that last episode airs — assuming Bailey survives (hey, it's Grey's — you never know).

"I enjoy being a part of this history. I enjoy being a part of a story, of starting a thing from scratch and seeing it through till the end. Because then after that, whatever the next opportunity is, that’ll be there. It’s not going anywhere," she explains. "So I would really like to ride my Bailey ride, and tell her story, and then be able to point to that and say, look, I started it and I finished it."

"So maybe it’s just a pride thing now, more than anything," she adds with a laugh.

Over the course of 15 seasons, Wilson has made herself as invaluable to Grey's as possible — not just by delivering an awards-worthy performance (four personal Emmy noms and counting) but by keeping her on-set behavior low-key and trouble-free, especially when it's come to her feelings about Bailey's ever-changing storylines.

"You can always go in and make suggestions, or do some modifications [to plotlines], but everything doesn’t have to be 'no,'" Wilson explains. "I know some actors go, 'Oh, my character would never do such and such, and I keep saying, 'I don’t know this person is, I don’t know what she would do! I didn’t make her up! So it’s my job to figure out why she would as opposed to professing why she wouldn’t."

It might seem odd to some that 15 years into playing Bailey, Wilson still doesn't consider herself an expert on the character — but perhaps keeping that distance has actually been an asset. While Wilson doesn't name names, Grey's fans can guess which actors might've disagreed with her rules and taken their work a bit too personally over the years. Heigl famously left the series in 2010 after years of controversy, including a public statement that she didn't submit her name for Emmys consideration because she didn't feel she had been given good enough material to warrant the honor. Isaiah Washington, meanwhile, was let go from Grey's back in 2007 after calling co-star T.R. Knight a slur during an on-set argument. And then, of course, there's Patrick Dempsey, whose shocking, unceremonious exit in 2015 was widely speculated to be due to conflict with Shonda Rhimes (Dempsey has denied there was animosity, while Rhimes has confessed to killing off a character because she didn't like the actor).

Wilson has borne witness to these incidents and many more, and the frequent drama has impacted her own attitude. "For a lot of us that hadn’t been series regulars before on a show, it was kind of an awakening," she recalls, referring to those first major Grey's exits, that of Washington and Kate Walsh. "Like, 'Oh, this happens,' that you don’t ride the whole thing 'til the end, that people can come and go... So it was an interesting time."

Wilson's years on a series full of actor movement has made her aware of just how much of a mix it is: some actors stay in one place for a long time, and some need to keep changing things. And that’s perfectly fine," she says. "It’s better to know that and to move forward than to stay in something and be miserable, you know?"

Yet while Wilson might've gotten used to her cast members coming and going over the years, Dempsey's sudden departure shook things up in a way the previous exits hadn't. "When it came time to shoot that, I just remember we were all saying, 'America’s gonna cry," she recalls with a laugh. "We had all had time to get used to his departure before it was time to shoot it, and we were OK, but then when I actually saw the episode air, we just echoed again, 'OK, they’re gonna cry and be really mad at us for awhile."

The atmosphere on set after Dempsey left wasn't all negative, however. Reactions to McDreamy's death were so intense — some fans called for the show to be cancelled, while others quit the show entirely — that it actually made things "fun" for Wilson and her peers. "That showed that people really pay attention to the show and they’re really invested in the characters, and that was overall a big compliment — I think we felt complimented by people being so mad," she explains. "It said we had done our jobs here."

Wilson has long known that Grey's has a large and passionate fanbase, of course (the show has consistently been one of ABC's top-rated scripted series), but it's often been difficult, she says, to truly take in that kind of success. Even during Grey's first few seasons, when the show was at its peak of popularity, the actors had a "shield" between them and the series' reception.

"We kind of worked inside of a little bubble, doing 16-17 hour workdays," Wilson recalls. "And we would see the numbers when they would come out on Friday, but because we had no tour buses or a bigger studio or anything like that, we were still pretty isolated in our awareness of how popular we were becoming. So the ratings, the numbers didn’t necessarily match with how we were feeling... For the most part, things were really simple for us for a really long time."

It wasn't until the cast started doing Grey's fan events and autograph signings — with hundreds of fans lining up to meet their favorite on-screen doctors — that they "all of a sudden felt like rock stars," Wilson explains.

15 years in, it's hard to imagine Grey's without Miranda Bailey, although as hard as it is to believe, Wilson almost wasn't cast as the doctor at all. As Rhimes recounted to O Magazine in 2006, when Grey's was first casting its ensemble, the doctor once known as "The Nazi" was envisioned as a "a tiny blonde with curls" — and then Wilson showed up to audition. "It said it was looking for a short, blonde white female named the Nazi. And for whatever reason, my agent thought of me," the actor recalls with a laugh. "I thought OK, two of those requirements I have... [and] I had absolutely nothing to lose."

So Wilson went to LA to read for the network, auditioning alongside women who looked the part as described. But she won the executives over (Rhimes told O that when Wilson started reading lines, she thought, "That's exactly who Miranda is") and nabbed the part, unknowingly starting a journey that'd last the next decade and a half — and counting.

"It’s interesting in series television, you never know if something’s gonna last a few minutes or is a rare opportunity to last a long time," she says now. "You don’t have an imagination for 15 seasons, from the beginning. You just don’t. So you look up and see where you are and go 'Oh, OK, let’s go over here.' And I guess we’ll keep doing that until it’s time to stop."

As for when that might be, Wilson doesn't know, nor does she know what might be in store for Bailey at the series' end. "Oh gosh. I have never been able to be a predictor of Bailey’s life and specifically have never gone into the writers room going, 'You should go in this direction with her.' And that has worked really well for me. Really well," she laughs, perhaps alluding to a former cast member or two. "I don’t have the slightest idea. And even if I were to ask the writers or Shonda where Bailey will end up, whatever answer they’ll give me, I know that it would still change according to when it’s time to write it."

Miranda Bailey's Grey's ending might be unknown, but whatever it is, you can bet that Wilson will be there to see it through.

More like this
On 'The Handmaid’s Tale,' Christine Ko Fights Back
By Gretchen Smail
'Grey's Anatomy's New Intern Got Advice From Dr. Bailey Herself
By Grace Wehniainen
Netflix Reveals First Look At Wednesday In The 'Addams Family' Spinoff Series
By Bustle Editors
Lauren Lyle Is Keeping The Contents Of Karen Pirie’s Bum Bag A Mystery
By El Hunt
Get Even More From Bustle — Sign Up For The Newsletter