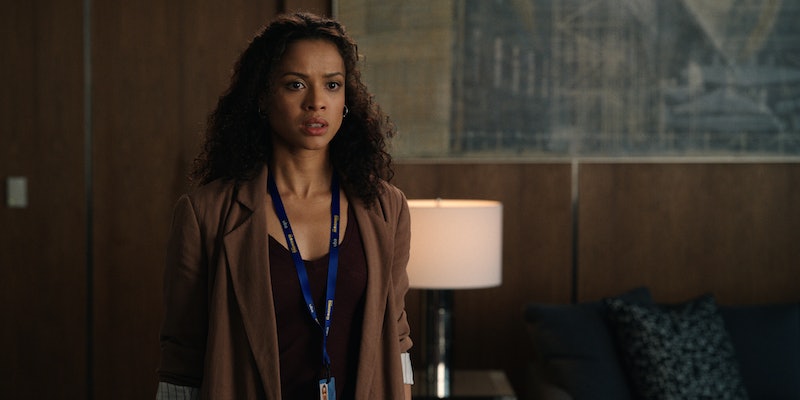 Major spoilers ahead for The Morning Show Season 1 finale. Since its November premiere, The Morning Show has generally been regarded as Apple TV's great, big almost. The writing is almost there, the ripped-from-the-headlines #MeToo premise almost hooks you, the buzzy performances almost distract from the series' other deficiencies. But across the final three episodes of its first season, the show effectively reorganizes itself, shifting the center of gravity from those who helm the morning news to those working on it behind the scenes.

Hannah Schoenfeld, the show within a show's head booker who has been lurking among the crew since Episode 1, is revealed to be a victim of ex-anchor Mitch Kessler's egregious sexual misconduct. Played with steely bluster by Gugu Mbatha-Raw, the arc of Hannah — young, black, motherless, and relatively junior on set — underscores just how much of Season 1 was spent on the fallout of Mitch's exposure rather than Mitch's victims: the wealthy news anchor left to shoulder the broadcast on her own, the canceled morning show host dead set on redemption, the network's top brass playing hot potato with the blame. It was a Hollywood soap masquerading as a #MeToo story — all sizzle, no stakes. Against this backdrop, Hannah surfaces at the end of the season as a character without money or fame to absorb what's happening to her, and The Morning Show finally feels like a series with something on the line.

"I always found her quite a relatable, grounded character compared to the egos and narcissism that's going on within the internal politics of the show," Mbatha-Raw tells Bustle of Hannah, who dies after overdosing in the Season 1 finale. "She has worked her way up, she is ambitious, but there've been huge costs to her, emotionally and morally, to end up where she is."

After her traumatic sexual encounter with Mitch, Hannah was promoted — a tacit trade for her silence. Mbatha-Raw thinks the compromise "festered within her, that shame and that moral boundary that she crossed in terms of not speaking up."

But in the season finale, even Hannah's silence is ripped from her. Determined to bring the network down with him, it's Mitch (Steve Carell) who, perversely, asks her to corroborate the cover-up culture she witnessed. Without her permission, he reveals Hannah's name to her colleagues who are working on the investigation. Coerced into participating, Hannah eventually recounts everything that happened between them — "I didn't know what to say, I figured I'd just do it. It didn't kill me" — in an interview with Reese Witherspoon's Bradley Jackson in Hannah's apartment. Mbatha-Raw says it's "probably the biggest scene" she's ever done, a "beautifully nuanced meltdown" that sees Hannah move from reluctantly answering questions to reliving her experience to screaming for Bradley to leave.

A typical scene in television is two to three pages long, but Hannah's brutal confessional goes on for eight. Director Mimi Leder shot the dialogue (which is nearly a monologue) in full 15-minute takes: no cuts, no close-ups, no interruptions. Mbatha-Raw says she and Witherspoon ran the scene four or five times. "Hannah has many moments in the show, but that was certainly a big one. I don't think she's ever really vocalized the experience to anyone. She hasn't been to therapy. She's not that close to her family. This is the first time that she's reliving it and actually in that process, it becomes real to her. She's been in denial of it for so long."

Because filming schedules are dictated by location, the only other scene Mbatha-Raw shot that day was the scene in which her neighbors find Hannah's body. "So I did a huge scene and then I was dead, literally and metaphorically, in terms of what it took out of me.”

If Hannah's death is jolting for an audience used to seeing "consequences" doled out in rescinded contracts and tanked ratings, it's catalyzing for the cast and crew of The Morning Show. Bradley cooperates with Jennifer Aniston's Alex Levy to reveal on-air what the boy's club climate at their network is really like. A producer punches Mitch, whose scorched-earth campaign to ruin the network is surely redundant now. There's a reckoning in the show's final moments, with Mitch's pummeled face reflected back to him in the dark mirror of a long, sleek table. The characters finally catch up to what viewers have understood all along — that Mitch and Alex and TMS will probably all be fine and honestly who cares if TMS isn't fine? Perceiving yourself as a victim can blind you to the real ones.

The show's detractors will likely think it's a mawkish, unresolved way to end a season. To be sure, the death of a minor character who makes a last minute surge into the A-story but doesn't survive the transition isn't a groundbreaking recipe for cliff-hanging TV. But in the case of The Morning Show, it's a recipe that makes sense of the milieu. For Mbatha-Raw, that Hannah's pain was allowed to smolder undetected isn't a flaw of the show, it's a flaw of the world. "The media gets so caught up, it sometimes forgets that there's a human at the center of those experiences who is very traumatized," she says. "It's so fascinating that it's a character seemingly in the background [who suffers the most], but I think that's often life."

Mitch's actions made Hannah a victim, but it took an entire network to make her invisible — a tension Mbatha-Raw predicts will hang over Season 2. "The shadow of her death is going to have huge implications for everybody, and everybody is somewhat accountable for that."