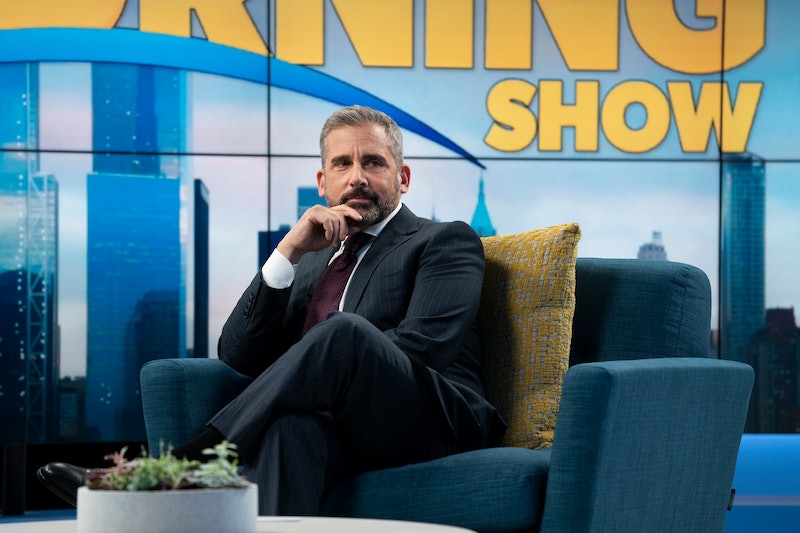 In its ability to attract bad buzz alongside 2500-word think pieces on Jennifer Aniston, The Morning Show has remained a persistent curiosity — one I haven't been sure is very good but can't stop watching nonetheless. One of my biggest gripes has been its reluctance to thoroughly prosecute Mitch, the longtime news anchor credibly accused of sexual misconduct and played with indignance by Steve Carell. Because the narrative is more concerned with how the allegations upset the workplace than how they affect Mitch's victims, the extent of his predatory behavior has remained vague. But the show's Dec. 6 episode — set entirely in flashback — finally makes clear how we're meant to feel about Mitch. Reassuringly, the answer is "quite terrible."

Mitch's fall from grace may have been the catalyst for rough-around-the-edges Bradley Jackson (Reese Witherspoon) to join the anchor desk, but since The Morning Show's debut, he's felt more like a ghost hovering over the production than its dramatic engine. In a scene early on, he sits down with another celebrity embroiled in a sexual misconduct scandal to discuss making a "nuanced" documentary about #MeToo. But the only nuance seems to be that Mitch doesn't think of himself as a real perpetrator. Until now, the audience couldn't be sure either.

When the Dec. 6 episode opens, it's suddenly 2017, and Mitch is turning 50 at an over-the-top birthday party where his wife, who knows about his chronic cheating, watches him get serenaded by that same canceled entertainer, plus a bevy of professional dancers. It's also the night of the mass Las Vegas shooting at the Route 91 Harvest music festival, which becomes nervy guest-booker Hannah's big break when Mitch suggests she come along as The Morning Show broadcasts remotely from the strip.

The storyline from there is both disturbing and painfully familiar. Hannah (Gugu Mbatha-Raw) is having a hard time processing the tragedy she sees around her when she runs into Mitch, who distracts and consoles her, even inviting her to his hotel room to watch a film. She thinks he's mentoring her, maybe even parenting her; he thinks he's hitting on her. As is so often the case, the person with all the power in the situation gets to define it.

When, back in his room, Mitch unbuttons Hannah's pants and climbs on top of her, she looks panicked, but Mitch doesn't look at her at all. The scene is played with an eerie quiet, as if daring us to imagine what he'll inevitably say if he's ever forced to explain what happened: She didn't say no.

"[Remote shoots] are a good opportunity to make an impression on higher-ups," Hannah told a colleague in a previous episode. "There's an excitement in the air. Stuff happens on remotes." Thinking of that exchange after this week's episode, the foreboding feels hard to miss. "Stuff" isn't what you say when what you mean is "good stuff." Stuff is vague and evasive. Stuff is bad stuff. Mitch is a bad guy.

Hannah was immediately blinded by Mitch's charisma and magnetism, but as viewers, we've been Ashley, the sound tech who first alleged harassment against him. To her, Mitch's harassment was almost attritional — what started as a few moments of her day under the winking glare of the star anchor later became the entire focus of it. It was friendly...until it wasn't. Mitch revealed himself to her as slowly as the show reveals him to us.

It's possible the ambiguity until this point is a symptom of the series' turbulent adaptation process. The Morning Show is based on Brian Stelter's Top of the Morning, a bestseller from years before Matt Lauer and Charlie Rose were fired amid sexual misconduct scandals in late 2017. The Morning Show, which was already in development, was forced to adapt on the fly, replacing old scripts with ones that reflected the events disrupting the country. As executive producer Reese Witherspoon recently told Terry Gross, "We felt it would've been remiss if we didn't address them in our show. And so the showrunner Kerry Ehrin - to her credit, I think - decided to delve in Scene 1, Episode 1."

Like it or not, Apple was making the first #MeToo show, without the gift of time to see how the dust would settle. And despite insistence from The Morning Show's creators that Mitch isn't a stand-in for Lauer, he's certainly the closest thing to Lauer audiences have seen on TV so far.

In the past, The Morning Show has arguably glossed over this positioning as an explicitly #MeToo story, but "Lonely at the Top" delivers on the series' premise and on Aniston's commanding return to TV. Though sidelined for much of the hour, she reappears to issue the final verdict. After Hannah has complained to her boss about what happened with Mitch — and after she's silenced with a promotion and a pay bump — Aniston's Alex watches news coverage of the Weinstein sexual harassment allegations, which broke days after the Vegas shooting and two months before Matt Lauer would be fired. "What a pig," she says, speaking to herself and straight to us.