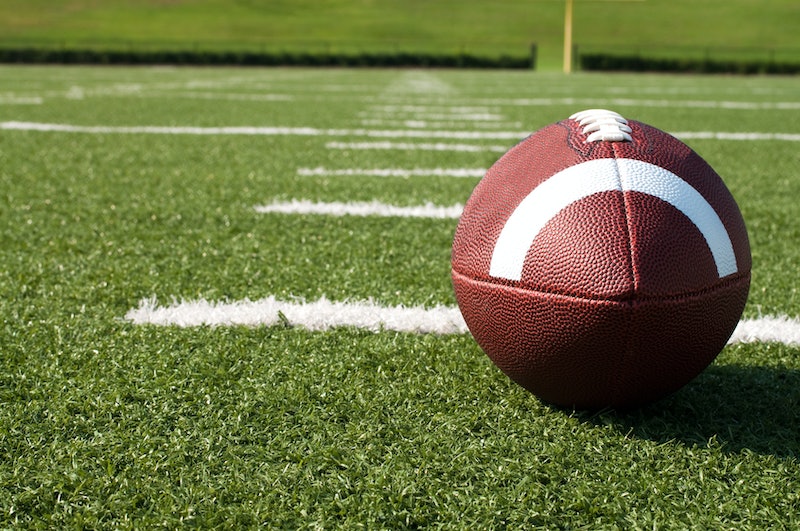 During the 2016 NFL season, former San Francisco 49ers quarterback Colin Kaepernick sparked worldwide support (and outrage from other people) after he began to kneel during the national anthem, in protest of police brutality and racism in America. His protests inspired much needed conversations about systemic anti-blackness, and some civil rights activists, like writer Shaun King, called to boycott the NFL until Kaepernick is drafted (as many people saw his not being signed as a "punishment" for speaking out). In response to the controversy, the NFL shared on Jan. 23 it would launch a new campaign called Just Listen, to encourage further dialogue on racism in America, led by the league's players. While NFL leadership has paid lip service to its players' protest for racial equality, a different conversation — one that once dominated the conversation about the NFL — has fallen to the wayside. Domestic violence in the NFL, especially affecting Black women, was an important issue football-watchers once demanded the NFL to address. But these days, it is rarely talked about. Until the issue of domestic violence within the NFL is handled by its leadership, I refuse to watch the Super Bowl.

I grew up in a Steelers family, and spent much of my childhood in Western Pennsylvania, so football and the Super Bowl weren't an option — they were mandatory. Though I wasn't ever so into the sport itself, I looked forward to the tradition of football on Sundays — family and family friends gathering, tasty food, and my grandfather yelling at the television set. Yet, in the past few years, the Super Bowl has become less of a nostalgic tradition to me, and more of glaring reminder of how much anti-blackness and domestic violence issues still seem to permeate the beloved American pastime.

Though FiveThirtyEight reported in 2014 that the rates of domestic violence among NFL players are lower than the national average, domestic violence makes up 48 percent of all arrests for violent crimes committed by NFL players. Domestic violence within the NFL started to attract mainstream coverage after O.J. Simpson was arrested for the murder of Nicole Brown Simpson in 1994, for which he was famously acquitted. The conversation quickly faded from the public scope until 2014 — after a video surfaced of former Baltimore Ravens player, Ray Rice, dragging his then-fiancée out of an elevator after he allegedly assaulted her. He was banned from two games and fined $58,000 by the NFL, according to TIME. After a second video showing Rice punching the same woman, whom he married after the release of the first video, was circulated, he was cut from the Ravens and suspended indefinitely from the NFL. (The suspension was overturned by a federal arbiter in Nov. 2014, according to the New York Times. In Feb. 2015, Rice issued an apology letter to his fans, according to ESPN, where he stated, "There is no excuse for domestic violence, and I apologize for the horrible mistake I made.")

But what impact have the NFL’s domestic violence initiatives and commercials truly had on the league, and in our communities? Besides the donated money making a positive difference for organizations by allowing them to serve more survivors, the answer is very little. According to a 2017 investigation by B/R Mag, the six-game suspension policy has reportedly rarely been enforced in cases of domestic violence since it was created nearly four years ago. (The NFL declined to comment in the B/R Mag article. Bustle attempted to reach out for this story, and we will update this story when we hear back.) Moreover, when the policy is enforced, the process can be complicated and harmful to the survivors: After Dallas Cowboys running back Ezekiel Elliott appealed his punishment for alleged domestic violence in summer 2016, the NFL player and the NFL were entwined in a yearlong legal investigation, during which time Elliot participated normally in the NFL; Elliot did not agree to serve his six game ban until this past November. (According to B/R Mag, Elliot denies the allegations.) As recently as January 2018, the NFL announced it wouldn't discipline Minnesota Vikings cornerback Tramaine Brock, who was arrested "on suspicion of felony domestic assault," after the NFL closed the investigation of the arrest, according to Bleacher Report. (The county where the arrest was filed dropped the charges against Brock, citing insufficient evidence.)

Of course, I'm not naïve. I don’t believe that domestic violence initiatives in the NFL will end domestic violence in the United States. The National Coalition Against Domestic Violence (NCADV) estimates one in three women, and one in four men, will experience some form of intimate partner violence in their lifetime. This isn’t just a NFL problem; it’s a cultural problem that affects people of all socioeconomic backgrounds and identities. However, I do expect more from the NFL, and its players who, unquestionably, have some of the largest public platforms in the United States — as Kaepernick's protest has shown. The Super Bowl, and football in general, is not just a “sport” in America; for many, it’s tradition, a family event, and a major cultural influence. The NFL and its players have the ability to effect change not only on a local level, in the communities that follow them religiously, but they have the ability to help shift public consciousness. So, what message is being sent to majority of Americans if the NFL still seems to protect ratings and games, over the quality of life of domestic violence survivors — especially survivors of color?

The NFL’s commercials about domestic violence have been poignant and powerful, but to me, they feel like inconsequential attempts to bandage over a larger issue. Actions do speak louder than words, especially for survivors of domestic violence who are often failed by the court, law enforcement, and victim resources. It feels telling to me that Kaepernick was not signed to any of the 32 NFL teams after his peaceful protest of police brutality and racism in the U.S., while at least six players with sexual assault or domestic violence charges were again drafted in 2017.

ThinkProgress reported in September that NBC announcer Chris Collinsworth said during a game from this past season, “I know we’ve got a lot to talk about off the field with Ezekiel Elliott. You’ll forgive us tonight if we just talk about him as a football player.” Yet, most domestic violence survivors don’t have the privilege to compartmentalize our experiences. If it was as simple as ignoring the glaring issues the NFL still has with handling domestic violence, I would be watching the game. But it's not.

I want to see the league visibly expand on the domestic violence policies and PSAs it already has in place — including further preventative education, outreach, collaboration with domestic violence organizations, support services for spouses who come forward, and more. I want to see the focus shift from punitive consequences, such as the six-game ban, to initiatives that rather focus on uplifting the women. As an activist and domestic violence survivor, seeing actionable change from the NFL is more important to me than any family traditions.

More like this
9 Unmissable Moments To Relive From The Commonwealth Games
By El Hunt
At 14, Tatiana Maslany Was Obsessing Over Tamagotchis & The Spice Girls
By Gabrielle Bondi
Scotland's First Period Dignity Officer Has Sparked Backlash
By Darshita Goyal
Beyoncé & Madonna’s “Break My Soul” Remix Honors A Group Of Black Icons
By Stephanie Topacio Long
Get Even More From Bustle — Sign Up For The Newsletter