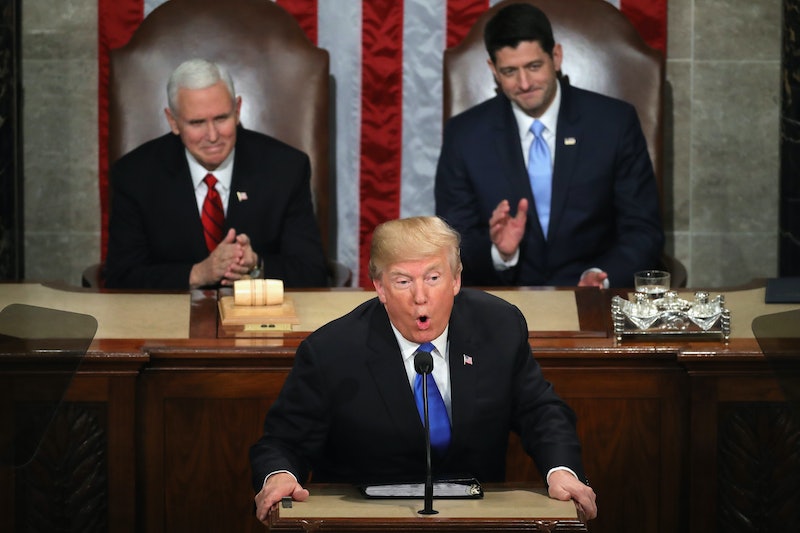 It's not often that you can call President Trump "quiet." As he blitzes through executive orders and hardline policies, however, some have inevitably fallen under the radar: We pulled out of the E.I.T.I. We were quiet at the World Trade Organization summit. We tossed out dozens of Obama-era environmental protections. It's not that we should care less about the massive, explosive changes — DACA matters; the transgender military order matters; the travel ban matters — but we must also find space to examine the comparatively "smaller" changes, too.

I'll be the first to admit this isn't easy. I know what you're thinking: You already expended a ton of energy calling up your senators, worrying about North Korea, protesting IRL and online — you name it, you've done it. It's been draining, disorienting, and expensive. It already hasn't been enough. And now I'm telling you to do even more?

Hear me out. What the last year has proven is that the "resistance" is a real, tangible force for change. We held on to Obamacare (mostly). We blocked the travel ban over and over again. We got a Democrat elected in Alabama, for God's sake. So, yes, it matters whether you resist the "smaller" stuff. It matters, because Trump does bow to public pressure. You can, and you have, made a difference.

We're at a point in history in which you're either on one side or the other, whether you like it or not.

For example: You might not know what the World Trade Organization does, or what America's role in it means. You probably didn't hear about how Trump opposed it, or how weak America looked at the last WTO summit. There's just too much else to worry about. Here's what the consequences could be: A global trade war. The weakening of the global economy. It might be slow — but it would be devastating.

You might have rolled your eyes when you heard that Trump hung a portrait of Andrew Jackson in the Oval Office. I mean, it's just a picture, right? Remember this: Jackson was a slave owner. Jackson set into motion the Trail Of Tears and many of the issues that plague Native Americans to this day. Jackson is someone Trump is quite literally looking up to.

But you're tired, you say. You're numb. I know. I know. It's not fair. This wasn't how things were supposed to be.

Until I Googled it, I didn't know what E.I.T.I. stands for. Here's what I learned: That Trump has pulled the U.S. out of it, and that it's an acronym for Extractive Industries Transparency Initiative, a landmark worldwide anti-corruption movement. The E.I.T.I. was set up to protect the most marginalized people in the world — citizens of low-income nations. Apropos of nothing apparent, America left. And, as with the U.S. voting against a UN resolution condemning the death penalty for being gay, you probably didn't even hear about it.

The onset of authoritarian regimes is often not particularly quick. It happens slowly, before your very eyes, with each change becoming gradually normalized.

Just ask Amy Siskind, author of the weekly "The List," which describes itself as the tracking of "specific news stories representing eroding norms under the current regime. Taken together, they reveal a nation pushed towards authoritarianism." Basically, it's a checklist of changes — big and small —that we can't afford to normalize.

When we don't worry about what the Trump administration is or isn't doing — when we assume that other people, expert people, activist people, will worry for us and fight on our behalf — then not only do we normalize his actions, we also become complicit. Whether we're numb or just tired or just don't have room to care any more — we're complicit.

But you're tired, you say. You're numb. I know. I know. It's not fair. This wasn't how things were supposed to be. And sometimes, you have to take a step back for the sake of your own health. Of course you do.

When you're able to emerge, however, remember this: We're at a point in history in which you've already taken a side, whether you like it or not. And, as I've argued before, when you don't pick a side, you're picking a side.

It was the "small stuff" that got Trump elected: The misjudging of demographics in Michigan; the gendered discourse surrounding Hillary Clinton's emails; the off-the-cuff ideas that becoming a lightning rod for Trump supporters, like "Build a wall!".

It will be some combination of "small stuff" that dictates the outcome of the 2018 midterms, and the 2020 election. And we need to find a way to make space to care about that, too.