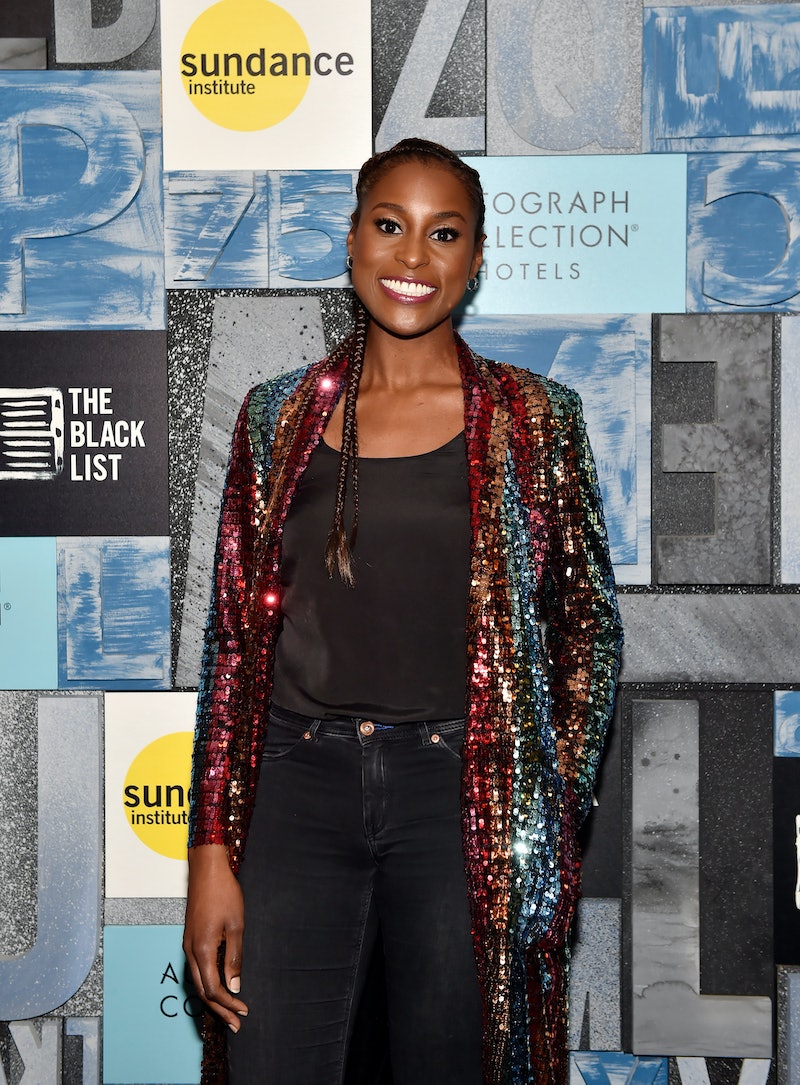 We're at a rather interesting point with the #MeToo and #TimesUp conversations. These conversations are finally gaining the ground they deserve and swelling to the biggest, most important conversations we're having in the world of entertainment (just look at the Golden Globes or media coverage of any televised event). But when it comes to the TV & film that's being created at the same time as the movement gains traction, should we expect that series and films all address #MeToo and Times Up directly? For Issa Rae and Insecure Season 3, the answer is, well, a little more complicated than that.

"I think [Season 3 will address it] in a way, but in its own way — knowing that it happens in life," she says, when we speak backstage at The Black List and Autograph Collection Hotels' Sundance Power Women's Cocktail Party in late January. Rae is about to join powerhouse women like host Aisha Tyler and Tessa Thompson to continue spreading the Times Up mission at the event. You could say that women's empowerment and Times Up were a bit of theme at this year's Sundance, and while Rae values the conversation immensely, she also values keeping the realism of her series and its cast of characters in tact.

"I see that just in our every day life, that things happen to us and especially us black people," she says. "In the life sentence of being black, racism is like a comma — you pause and then you keep pushing, because you don’t have to be like, 'Oh, this is a very special moment' or 'this moment affected me in this way.' It’s about what those moments make you do afterward." So, Rae says the new season will focus on that feeling as it applies to Issa and Molly, as it always has, and on "seeing these moments play out in the way that we sometimes brush these feelings off because we feel like we don't have time to address them."

She was careful not to spoil exactly what this might mean for Issa, Molly, or Lawrence, but it seems that it's safe to say we won't find an episode in which Issa is curled up on the couch, online shopping for her very own Times Up pin, or where Molly takes her lawyering skills to Times Up leader Thompson to offer her pro bono services.

The way Season 3 will actually directly address the conversation and all that it encompasses (harassment, equal pay, discrimination, etc.) is in the series' press tour (also known as all the TV appearances, interviews, and red carpet chats celebs do leading up to the release of a TV show or movie), according to Rae. While Awards Season and Sundance offer a great, highly visible platform for the conversation, it will be a battle to keep the issues top of mind once the red carpet is rolled up after the Oscars. But for Rae, the work is never over.

"Being in the entertainment industry is a year-round thing and so even in certain interviews when we’re promoting our shows, there’s always an opportunity to talk about the changes that we’re making in our own respective fields," she says, adding that the conversation about equality and respect can and should extend to all parts of the work, from "back door meetings" to always having relevant talking points at the ready.

"As long as we’re championing women and we continue to keep women at the forefront — and I, personally, am prioritizing women of color especially — we can keep on facilitating that kind of change in our own movements," says Rae. "Then I feel like the conversation won’t die."

And while there is probably a little smidgen of fan-fiction-esque satisfaction to be had from seeing Insecure Issa take on the battles that the real-life Issa is waging, it's probably for the best that each party continues to do good the way they do it best. For Insecure, it's all about being subtle — relevant, but not so much #relevant. And in real life, well, Rae seems ready to keep on raising her voice in determinedly unsubtle and powerful ways.