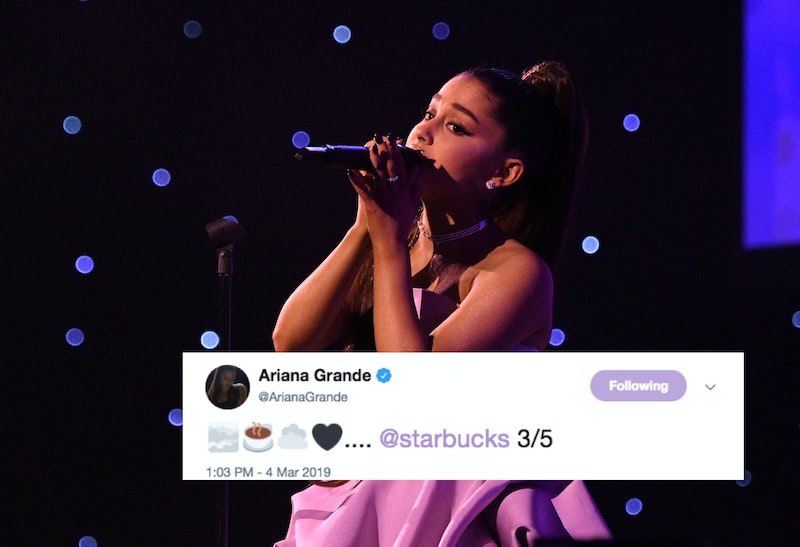 Friends, it's been years of us making jokes about Ariana Grande's last name and Starbucks' drink sizes, but today the joke may be on all of us. Ariana Grande just tweeted at Starbucks with a bunch of emoji, leaving millions of fans scrambling to find out what it means. The tweet in question includes four emoji: a cloud, a cup of coffee, another cloud, and a gray heart, along with a tag of the Starbucks handle and the numbers 3/5. This is, apparently, just enough characters to put in a tweet to set the entire unsuspecting internet on fire.

While it seems pretty clear that fans aren't going to find out what it means until Tuesday, March 5, this definitely wouldn't be the first time Ariana Grande and Starbucks made news. Who on this internet could forget the day that a BuzzFeed editor boldly walked into a Starbucks and ordered an Ariana Grande? Loryn Brantz did just that in 2015, and one game barista named Amy in the New York City location rose to the challenge, making an Ariana-inspired confection for her. Per Amy, it had "extra everything," as she believed Ariana would have wanted it that way. The end result was a base of Cotton Candy Frappuccino, along with extra mocha syrup, extra mocha chips, extra whipped cream, and a ton of caramel drizzle. Per Brantz, "It ended up being one of the most flavorful drinks I've ever tasted."

It's been just over four years since that fateful day, and now we have this: a cryptic message full of emoji, and a bajillion fans-turned-detectives on the case.

Some users think that this means there may be a collab in store between the singer and the iconic brand.

But, as other users quickly noted, the megastar also just hinted at a collab with Target. (Ariana Grande is, as usual, having quite a busy week.)

Regardless, all the tweets seem to have a common theme: people are very, very excited to find out what's going to happen tomorrow.

The cloud emoji, fans will notice, is a running theme in Ariana Grande's life. In fact, the singer has a cloud tattooed to her finger. An Instagram of it in September 2018 included, of all things, a Starbucks drink. Coincidence or no?

Ariana Grande also cited clouds as the inspiration for her 2018 album Sweetener, as well as for her cloud perfume, which dropped exclusively at Ulta on Sept. 1, 2018.

So what the heck is going on in the meantime? Nobody can say for sure, but Starbucks did just drop a cryptic tweet of their own, hiding little Ariana Grande references in this image of a heart cloud, and also indicating that news would drop tomorrow.

While Starbucks and Ariana leave us all guessing for what's (thank you) next, we can at least take some solace in knowing that, everything else aside, the iconic Cotton Candy Frap that was informally dubbed the Ariana Grande in 2015 is still readily available for anyone with a sweet tooth and magic in their heart.