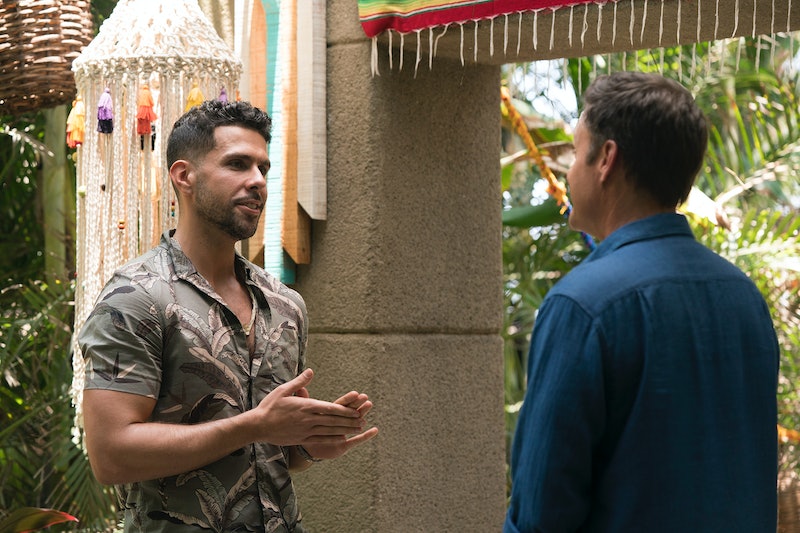 It would make sense that Chris, a guy who seems to really love machismo, took a nickname from a movie where everyone is oiled-up and shirtless all the time, especially while playing volleyball, but actually, that's not what happened. Chris explained in the beginning of Bachelor In Paradise that he was a bit of a jerk on Becca's season of The Bachelorette (from whence he just came) and that he was misunderstood. In real life, Chris said, he is more of the "silly goose" type of guy and not the "ignorant ass," and from that point onwards, he wanted to call himself "Goose" as a means to remind people that he's not like a real mom — he's a cool "Goose" mom. Get it?

He's ready for love, and he doesn't want anything that he did on The Bachelorette to set the tone for his season of Bachelor In Paradise.

That's a fair point. Bachelor In Paradise is probably the best way to showcase who you are as a person because the rules are that there really are no rules. On The Bachelor and The Bachelorette, there is a set narrative and a definitive formula, but on Bachelor In Paradise, the men and women are free to mix and mingle, and this means that we see a lot more of true personalities than on a show like The Bachelorette. Chris kind of lost his cool on The Bachelorette — he demanded time from Becca like he was the star of the show, and he told her that she "owed him" kisses because she decided to talk to other men during the cocktail party.

Chris clearly didn't know how The Bachelorette worked then, but hey — maybe he deserves a second chance, even if he is giving himself a nickname, which is a no-no. Chris apologized in an Instagram post, saying, "I take full responsibility for my actions on the show. I spiraled down and let my emotions get the best of me. To put it best, I failed. Knowing how strong minded I am and to see how weak I was really disappointed me." It's important that he can admit when he's wrong.

Who will Chris end up with on Bachelor In Paradise? That's anyone's guess, as he first went out with Tia, only to have Tia's attention turn completely to Colton as soon he stepped on the sand. Chris is at an impasse, bouncing between Tia and maybe Krystal, and for now, he has to feel out the rest of the women on the show. But one thing is for sure — Chris won't be remembered as a "silly goose" if he pulls that possessive mess again on Bachelor In Paradise. He'll just be an ass.