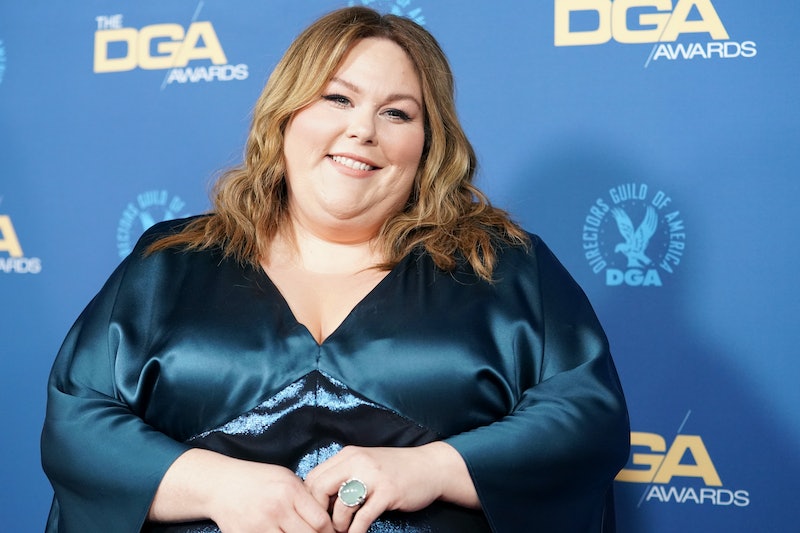 One of the highlights of any Academy Awards ceremony is when the nominees for Best Original Song are performed. Last year's winner, Lady Gaga's "Shallow" from A Star is Born, became one of the most talked about moments of the entire night when Gaga sang the steamy duet with co-star Bradley Cooper. This year, a number of famous faces will be singing original songs when the Oscars go live on Feb. 9 at 8 p.m. on ABC. Popular musicians like Elton John, Idina Menzel, Cynthia Erivo, and Randy Newman will hit the stage. The fifth performer, Chrissy Metz, however, is known more for starring on NBC's This Is Us than she is for a musical career. So why is Chrissy Metz performing at the Oscars?

Metz is performing the song "I'm Standing With You" written by Dianne Warren for the movie Breakthrough. The film is based on the Christian book The Impossible, a retelling of a true story, written by Joyce Smith with Ginger Kolbaba. The faith-based inspirational drama stars Metz as Joyce, a mom whose 14 year old son John falls through a frozen lake. Trapped under water for 15 minutes before being brought back to the surface, the boy seems unlikely to survive. The film follows the journey of Joyce, her husband, and their pastor as they pray by John's bedside, hoping for a miracle.

When making the film, the song's writer Diane Warren was nervous about having Metz sing the song. "They said Chrissy had to sing it and I was like, 'Oh, God! She's an actress. Actresses can’t sing,'" Warren told Variety at the Los Angeles premiere of the movie. "I said,' Let's get a superstar. Get Carrie Underwood. Get Kelly Clarkson. Get Celine." But when she heard Metz sing, "I was f—ing blown away and I was like, 'Now I don’t want anybody on this but you because you're awesome.'"

Of course, fans of This Is Us will already know that Metz has a great singing voice. Metz plays the oldest version of Kate Pearson on the family drama, an aspiring singer whose dreams echo those of her mother (Mandy Moore).

The morning that the nominations were announced was surreal for Metz. "I am beyond excited," she told Deadline "My heart was pounding out of my chest. When they announced it, I actually couldn’t believe it. I was in shock; I don’t think I’ve been in shock before." Nomination morning also came with some additional good news for Metz. That very same day, it was announced that she signed a record deal with Universal Music Group Nashville

Metz' fellow Oscar night performers will be Randy Newman, singing "I Can't Let You Throw Yourself Away" from Toy Story 4; Elton John performing the new song "(I'm Gonna) Love Me Again" from Rocketman; Idina Menzel and Aurora singing "Into the Unknown" from Frozen II; and Tony-winner Cynthia Erivo singing "Stand Up" from Harriet. Tune in to see which song takes home that golden statue.