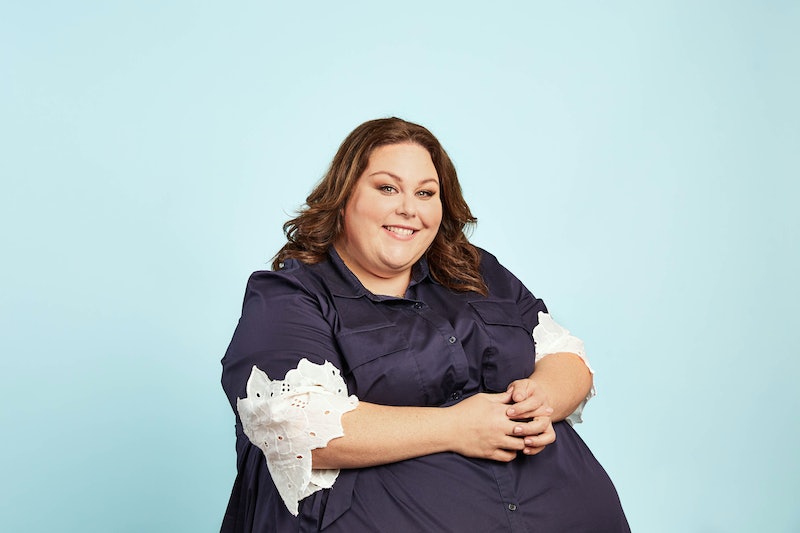 Whether you have a lot of debt, live paycheck-to-paycheck, or are struggling to balance your budget, money is probably not the first thing you want to bring up to your friends and family. However, it’s important to talk about money in order to end the stigma around it and actually learn how to better manage it.

A survey commissioned by Turbo, a free app from the makers of TurboTax and Mint, featuring 3,050 U.S. adults ages 18 and older, found that nearly four in five Americans (79 percent) have individual debt — such as credit card debt, car loans, and student loans (not including a mortgage) — and nearly two-thirds (63 percent) of Americans are facing them alone. And half (51 percent) of the respondents are choosing not to talk to their friends and family about money at all. Bustle recently caught up with This Is Us' star Chrissy Metz, who is featured in Turbo's most recent campaign #RealMoneyTalk, to talk about the taboo around money, and why it’s so important that people be more open about discussing money.

Why It’s Important To Talk About Money

Metz tells Bustle that because she didn’t come from money, she felt it never defined her. “I knew I had to work hard if I wanted things to change,” she says. For 12 years, she did that while pursuing acting in Los Angeles, she says. Even on the way to her audition for This Is Us, she had just 81 cents in the bank — and had to borrow money from a friend for gas. So, Metz knows what it’s like to not have money, never mind talking about it.

When Metz started to make more money, the first thing she did was pay people back, as well as pay off debts. She also started talking to friends about money and the best way to manage it, then worked her way to getting a business manager. She encourages others to save money each week, even if you only have a little to save. For instance, you can eliminate take-out coffees from your budget.

How To Help Break The Stigma Around Money

It’s not easy to open up to people about money, especially if you’re having a hard time financially. But, it’s important to. Metz says she thinks a lot of the shame and stigma comes from how people view themselves and how their identity is attached to the number in their bank account. “We believe it equates happiness or success, which is not necessarily true,” she says. You may think everything will be fine once you have money, and if you don’t have it, you may wonder what people will think of you, she says. “So it’s scary to talk about it — ‘Oh, I should have budgeted better this month’ or ‘I wish I would have felt better about asking for a raise so I’m not struggling this next month,'” Metz says.

She also says it stems from conditioning, especially where women are concerned. “Women were growing up and feeling like they were just there to put food on the table and look pretty when their husband came home,” she says. “But times have changed and it’s hard to unravel the mentality around that.” So, the stigma continues, which is why it’s important to speak up. When Metz was married, she says she and her husband didn’t have a honeymoon due to not having the money. “I always resented the fact that I never said to him, ‘Let’s see what we can save’ — because there is always room [to do so],” Metz says. It’s necessary to have those tough conversations, she says.

Start Small — And Always Have An Intention Before You Spend Money

Metz says, over time, she started to get more educated on money and recommends starting small, even if you think you have no money to spare. She says the first step is to know where you stand financially and decide what it is you want. “They can be short-term goals, since long-term can be overwhelming,” she says. For example, you may need a new suit jacket for a work interview. Metz says to ask yourself: Am I willing to give up three coffees this week to save money toward the jacket? Or maybe you’ll work overtime or start a side hustle. “There’s a lot of different ways you can earn money, and I feel like if you really want something, you’ll figure out a way to do it,” Metz says.

She says people tend to sacrifice so much for their jobs and relationships, but they also need to make sacrifices for themselves — whether it’s getting the afternoon coffee you need to finish your work day or looking at the bigger picture and saving for the jacket that will make you feel more self-confident in your interview. “It’s about self-worth, and what happens is, every time you do something like that, you are putting a little deposit in your confidence bank,” she says. This week, you can do something for the bigger picture; next week, maybe not.

She says it’s all about retraining your thinking around money: Do you really want that something, or are you filling a void with it? She goes through a checklist, asking herself if it’ll be useful, comfortable, and if she needs it. She says your checklist may vary, but it helps to have one. “What is my intention?” she says. “That’s how I try to live my life, no matter what it is…”

Before You Talk To Others About Money, Have A Money Talk With Yourself

The more comfortable you are with yourself and your financial situation, the easier it will be for you to open up to others about money. For instance, Metz says debts can eat away at you every day, especially if you’re not paying them. “You’ve got to figure out where you’re at financially and what you can afford,” she says. She suggests doing whatever you can in the moment, even if it’s calling a collections agency and paying some of what you owe if you don’t have the entire amount. “That’s something that I never knew you could do, and they can’t deny what you can give them — it’s so freeing and you’ll feel better about it,” she says. “The positive aspect the ripple effect has on your life is, dare I say, invaluable. But you’ve got to know where you’re at to know where you want to be.”

Then, after talking to yourself about money, you can talk to others — and you’ll be more confident and comfortable doing so. Sometimes, you and friends may share your financial burdens with each other — like student loan debt — but other times, money talks may enter the picture when you and friends split something like the group dinner bill. Although it may be a touchy subject if you’re the frugal friend — speak up. “Just be honest,” Metz says. “It’s so so so so hard, but you’ve got to be.”

All in all, Metz gets what it’s like to hesitate talking about money with others — but like she says above, the more you do, the easier it gets, and the more it’ll encourage others to have open discussions about money, too.

More like this
What Is Brad Pitt’s Net Worth? The Bullet Train Star Now Makes 8 Figures Per Film
By Hugh McIntyre
Gemma Collins' Net Worth Is Only Going Up
By Catharina Cheung
What Is Beyoncé's Net Worth? The 'Renaissance' Hitmaker Makes 9 Figures On Tours
By Radhika Menon
Leaving Corrie Helped Michelle Keegan Make Her Millions
By Maxine Harrison
Get Even More From Bustle — Sign Up For The Newsletter