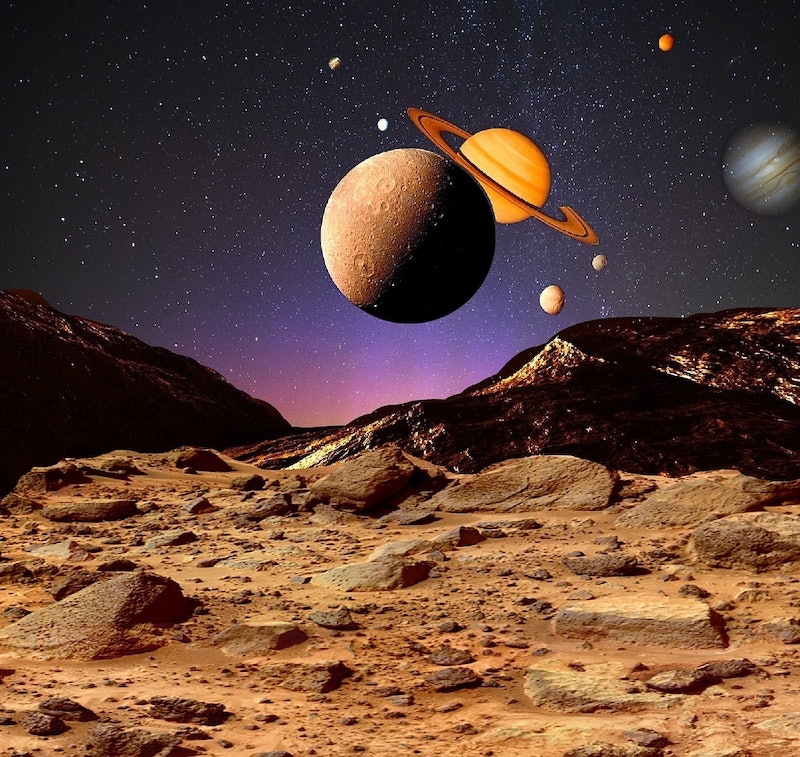 Jupiter Retrograde has been quietly facilitating your path of personal growth since Feb. 6, and it's not over yet even though it's already May. So, you might be wondering: why is Jupiter Retrograde so long? The fifth planet from the Sun is retrograde until June 9, which is a whopping four months of retrogradin'!

Tarot.com calls Jupiter the "happy-go-lucky planet of expansion and growth," though despite that sunny description, you might might not always feel so bright and shiny during the process Z- perhaps because change and growth take a long time. "We all have inner wisdom if we take the time to listen to it, and Jupiter Retrograde encourages just that: Take a time out, slow down and listen to your inner voice," according to Tarot.com. "What is it telling you to do? It should be easier to hear now."

The dreaded inner voice. It's always trying to guide you, even when you don't want to listen. The four-month period Jupiter is retrograde is when you should be discovering your life's purpose; but, hey, no pressure. Gulp. Luckily, Jupiter is retrograde for four months every year so if you don't get that whole life's purpose thing figured out by June 9, you'll get another chance every year until you do.

Essentially astrology offers you the same opportunities over and over again, and sometimes the more difficult a retrograde period is for you, the more you need to slow down and listen to your inner voice.

"Instead of the happy-go-lucky planet pushing us to go go go, Jupiter will now go slow slow slow — which means it's the perfect time to take a time out and examine our personal philosophies and reevaluate the beliefs that motivate us on a daily basis," DailyHoroscope.com notes.

Jupiter Retrograde overlaps with Saturn Retrograde, the other slow-poke that also hangs around for five-to-six months every year. This year it began Apr. 6 and ends Aug. 25. So, while you're trying to figure out your life's purpose, you'll be simultaneously resolving past life issues, which is the focus of Saturn Retrograde. While this might all sound as appealing as heading out into a winter snowstorm in your bathing suit, it's going to be OK because slow Jupiter can also bring you luck.

"Interesting and unexpected opportunities may still present themselves during this time — and if that happens, it will often be directly connected to lessons you need to learn, and aspects of yourself you've ignored," DailyHoroscope.com advises. "For example, you might be presented with an invitation to return to school, take a family trip or to reconnect with a person who you might have rejected (in friendship or love), yet who might have had a lot to teach you."

And, while some of these things might not seem lucky at first, the best gifts are often the ones we don't even realize are gifts at the time. You may have to wade through some muck to find the treasures during Jupiter Retrograde, but when you do they'll almost always be worth it. And, sometimes, good things take a very long time to manifest, like waiting four seasons for Luke and Lorelai to kiss on Gilmore Girls. I mean, could it have taken any longer? Clearly they were not reflecting enough during Jupiter Retrograde.

Because Jupiter is so slow, you might be getting impatient, which could mean you're not spending enough time looking inward. Yes, that dreaded self reflection again.

"Jupiter is a kind and benevolent planet that fosters positive growth, and seeks to put us on the right path. While success, accomplishments, and prosperity are all associated with Jupiter, the opposite side of that can manifest as laziness and sloth," the astrology website Sage Goddess notes. "If you’re a Libra or have Libra in your chart, you’re going to feel this much more strongly than our non-Libra influenced friends. During this retrograde, we will be forced to notice what isn’t working in our lives. This can be in any area, from love, career, health, and personal relationships."

I am a Libra, and I have been feeling this retrograde quite a bit. I am stubborn. I don't like to listen. I don't like to admit when things aren't working, but until I do I might keep feeling adrift, and at some point I'm going to have to get out of my own way. We have one month of Jupiter Retrograde left, so there's still time to let that inner voice in (I say this as much for you as for myself).

Because, as DailyHoroscope.com writes, "Jupiter is all about finding the highest version of yourself — so take advantage of these opportunities, and go for it!"