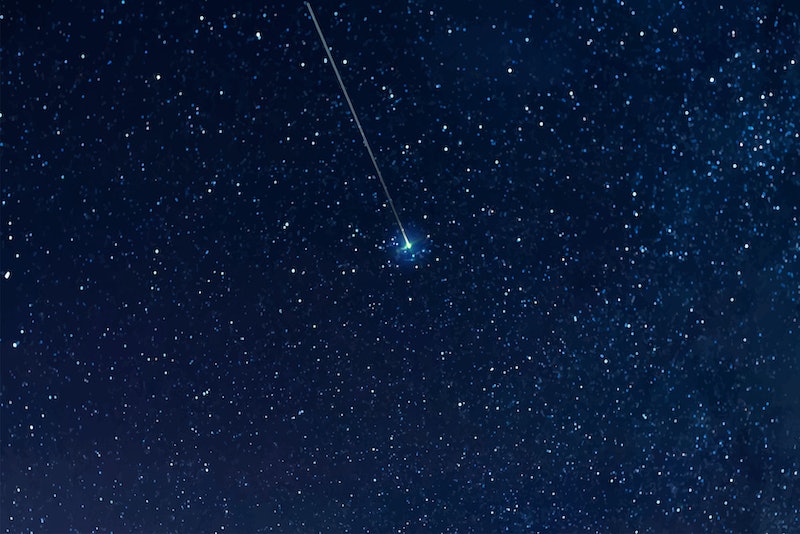 For some, even those with only a cursory knowledge of astrology, hearing the word "retrograde" can inspire feelings of dread — so you may not be thrilled to hear that Jupiter retrograde in 2017 begins Feb. 6. What you might not know, though, is exactly what's in store. The communications snafus that can happen during Mercury retrograde are common knowledge, but what about Jupiter? When this planet is retrograde, it affects a whole different part of your life, so get ready for a different experience that you might usually associate with the term.

So, what is retrograde anyway? Despite the word, planets do not actually travel backward during a retrograde rotation; they simply appear that way because of their position in relation to the Earth and Sun at varying times throughout the year. When it comes to astrology, "What retrograde means ... is that the characteristics of that planet — and whatever astrological sign it’s in at the time — may be repressed or may be expressed more internally than externally," wrote Diana Price for Inquisitr. "Whether that’s a good or bad thing depends on the circumstances for each individual."

Astrology.com calls Jupiter the planet of luck and good fortune. Astrologically speaking, Jupiter is a kind and benevolent planet that fosters positive growth, and seeks to put us on the right path. While success, accomplishments, and prosperity are all associated with Jupiter, on the flip side it can also manifest negatively as laziness and sloth. More often than not, however, Jupiter will guide you down the primrose path — which isn't necessarily a good thing. "On the negative side, Jupiter can inspire those in its influence to overindulge a bit or even get caught up in a bit of blind optimism," Price said.

Because Jupiter is a large and slow moving planet, it takes Jupiter about 12 years to circle the zodiac, with the planet visiting an average of one sign a year. Jupiter is in the sign of Libra when it turns retrograde on Feb. 6.

Like me, more than eight percent of the population are Libras. Libras are known for being peacemakers, artists, decorators, and eternal seekers of balance. When a Libra feels out of balance in one or more areas of his or her life, chaos can ensue, and most Libras that I know take this pretty seriously, including some well-known Libras. In her memoir Shockaholic, Carrie Fisher said, "I didn't realize I had post-traumatic stress disorder at the time, but why would I think I had that? Anyway, how would I know which was post-traumatic stress, which is addiction, which is bipolar, and which is Libra?"

Even if you are not a Libra, if you have Libra anywhere in your chart, or you have relationships with Libras (which is quite possible, as it's the fifth most common sign), you'll want to pay attention to this particular retrograde. "As Jupiter turns retrograde, anything that isn’t working will become more apparent," said Kate Rose on Elephant Journal. "Our souls will naturally be drawn to those relationships where balance flows as freely as love."

Unlike Mercury retrograde, which (mercifully) is over with rather quickly, Jupiter is retrograde until June. 9, giving you ample time to explore what is and isn't working in your closest romantic, personal, and work relationships. "Usually it’s not a lack of love, but a lack of vision that hampers our progress in romantic relationships," said Rose. "Luckily for all of us, Jupiter, the planet of expansion and big ideas, will be supporting us in all that we hold most dear."

Additionally, Jupiter in retrograde is associated with an increase in wealth as well as a great sense of humor. Those with a strong Jupiter influence in their chart can be intoxicating to be around; so after a period where everything feels heavy and dreadful, you may find yourself swept up in a sea of fun and friends.

As long as you don't get too caught up in false positivity, or default to five months on the couch watching Netflix, Jupiter retrograde can be a good thing.

As Price put it, "The gist of all of this is don’t worry. With Jupiter retrograde, everything will still be all right. In fact, it will likely make things better in the end as you prune away the things that don’t work for you and prepare for a new period of growth and expansion."

After 2016, I think it's safe to say we could all use a little pruning.

More like this
Your December Astrological Forecast
By Nina Kahn
Here's Your Horoscope For November 23, 2022
By Mecca Woods
These 4 Zodiac Signs Will Breeze Through December's Full Cold Moon
By Brittany Beringer
December's Full Moon Is Bringing Extra Drama For These 3 Zodiac Signs
By Nina Kahn
Get Even More From Bustle — Sign Up For The Newsletter