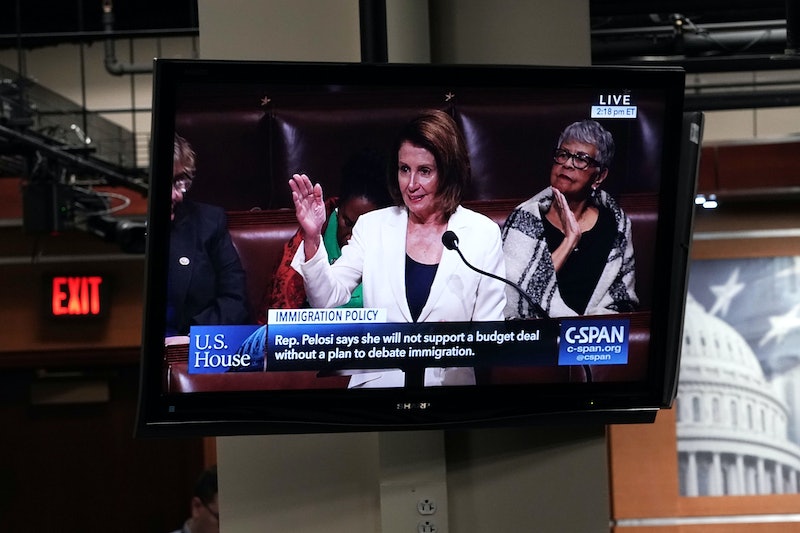 In a rare show of public grandstanding from the House minority leader, Nancy Pelosi gave a filibuster-style speech for over six hours on the House floor on Wednesday. Shortly after 10:00 a.m. ET, as the House was about to take up debate on a piece of mortgage legislation, Pelosi took the floor and began talking about immigration instead. As of this writing, she's still going.

In what became the longest continuous speech in the House in over 100 years, the California Democrat addressed the 3.6 million undocumented immigrants, or Dreamers, who were brought to the United States as children and, as such, are in the country illegally. President Obama protected some of these immigrants through the Deferred Action for Childhood Arrivals (DACA) program. But President Trump, with varying levels of success, has tried to undo DACA, throwing the fate of some 690,000 undocumented immigrants into question.

In her speech, Pelosi condemned Republicans for crafting a budget bill that doesn't address immigration. She also demanded that House Speaker Paul Ryan (R-WI) put a separate piece of immigration legislation up for a vote. The budget bill hasn't been voted on yet.

Technically, the U.S. House doesn't have filibusters — that's exclusively a Senate thing. But as the minority leader, Pelosi has the right to speak for as long as she wants (as does the speaker of the House). Given that she's been speaking for hours on end, which isn't common in the House, her speech was a filibuster in spirit, if not in name.

"Why are we here, if not to protect the patriotic young people who are determined to contribute and to strengthen America?," Pelosi said during her pseudo-filibuster, according to The Week. Pelosi spent much of her time relating stories about dreamers that other lawmakers had provided to her, CBS News reported.

Senate leaders from both parties announced on Wednesday that they'd struck a sweeping bipartisan budget deal that, among other things, would increase overall caps on domestic and defense spending for the next two years. However, that deal did not include any provisions to extend DACA or otherwise provide accommodations to dreamers, leading Pelosi to announce that she'll oppose it (This bill is separate from spending legislation to avert a government shutdown, which Congress is also in the midst of considering).

However, Pelosi's speech throws a wrench into Senate Leaders' plan for a bipartisan budget deal. In all likelihood, a handful of hardline conservatives in the House will oppose that deal, meaning that Republicans may need Democratic votes in order to pass it. But with the minority leader opposing the bill, it's entirely possible that few to no Democrats will vote for it, as Pelosi commands great respect from her caucus and holds enormous influence over their votes.

"I am taking this time because I think we have an opportunity now that is almost matchless we are in a moment when we can all come together to do something really good for the country," Pelosi said. "Take an action that has bipartisan support."

Pelosi demanded that Ryan commit to putting an immigration bill up for a vote if the government doesn't shut down this week. Senate Majority Leader Mitch McConnell (R-KY) made such a pledge in January and reiterated it to reporters on Tuesday, but so far, Ryan has not followed suit.

That may soon change, however. About six hours into Pelosi's speech, CNN reported that a bipartisan group of lawmakers had written a letter to Ryan demanding that he hold a vote on "all serious and substantive" immigration bills that are proposed, as well as any immigration legislation that passes the Senate.

As many reporters have noted, Pelosi has been delivering her speech in four-inch heels. As of this writing, she's been speaking for more than eight hours.