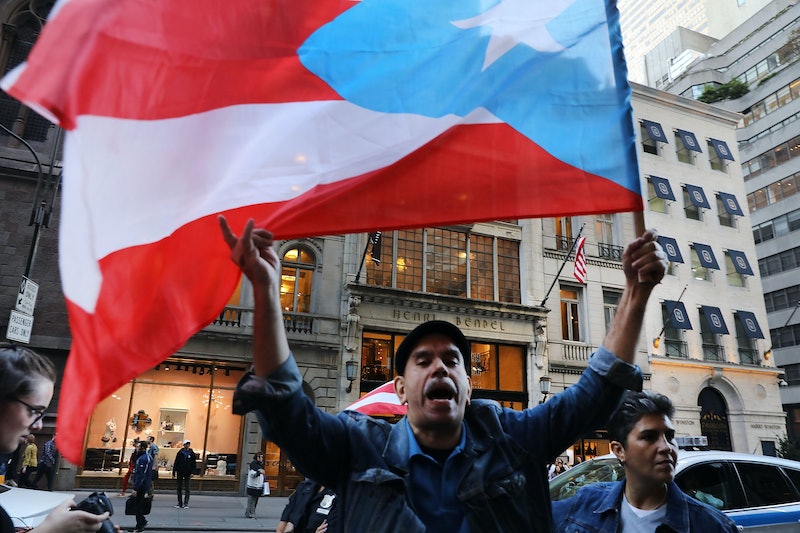 Since hurricanes battered down on Puerto Rico these past few months, you heard not just about the humanitarian suffering on the island, but also its public debt. The more than $70 billion it owes investors has also played a big roll in the discussions about infrastructure and recovery on the island. President Trump had plenty to say about this, tweeting about the debt last week and mentioning it in an interview Tuesday on Fox News. Some of his comments have drawn the ire of Puerto Ricans, but most Americans don't know why Puerto Rico has so much debt in the first place.

Last week, Trump tweeted that "much of the Island was destroyed, with billions of dollars owed to Wall Street and the banks which, sadly, must be dealt with." That drew strong words from San Juan Mayor Carmen Yulín Cruz, who criticized his likening a disaster to a purely economic situation. "You don't put debt above people, you put people above debt," Cruz told CNN.

Finally on Tuesday, Trump finally seemed ready to do just that. In an interview with Fox News Trump said the island's debt has to be wiped out:

That assertion from the president is huge, and it could really give the island a chance to recover from not just the hurricane but also its years of economic malaise and recession. That's one of the reasons that the debt situation has grown out of control, but far from the most important.

Likely the biggest reason that Puerto Rico is in such debt is the Jones-Shafroth Act, which granted the island's residents citizenship among other things. One key element is that Puerto Rican bonds are not taxed by the federal government, and cannot be taxed by any state or other U.S. territory. That means any interest that you make on the island's debt goes straight into your pocket, none of it is passed on to Uncle Sam. That made the bonds more attractive to investors, even when Puerto Rico wasn't as good of an investment.

Another reason that Puerto Rico faces such a crisis now is that it became so dependent on these bonds to finance its budget. Then when old debt came due, they refinanced at newer, higher interest rates. In 2014, rates reached around 8 percent.

At the time, Reuters reported that "the bulk would be used to refinance other debts and raise liquidity by $1.9 billion at the island’s Government Development Bank." To compare, some countries like Germany pay rates under 1 percent. When interest rates get too high, it's even harder to pay — just like a credit card.

Instead of the federal government paying for the bulk of its Medicaid costs, the island has to cover most of it. Just to get an idea, Puerto Rico got around $373 million a year from the federal government in 2014 and had to pay for the $2.5 billion of the rest of the costs of the program, according to the Times. In comparison, Oklahoma and Mississippi, both got more than $3 billion each that year for Medicaid. Puerto Rico is poorer than both those states.

So then in the 1990s, Washington took a bad situation where the federal government wasn't picking up its portion of the tab, and it made it worse. President Bill Clinton signed a law that changed the tax code in a way that was essentially a subsidy to the island. Section 936 was phased out over 10 years, but it essentially made it so that corporations based there couldn't get away without paying any taxes. That may sound good, closing a loophole like that, but it devastated the Puerto Rican economy, since it led to companies fleeing the island.

That in turn led to a worsening economy, growing unemployment, and a falling GDP. Puerto Rico has been in almost a free fall since even before the Great Recession of 2008. That meant there were less taxes to pay for the island's needs, and the island's debt payments. The worsening economic situation in turn triggered bigger payments on some of debts because the country's investment rating was downgraded.

Moody's warned in January of 2014, that Puerto Rico faced "$1 billion in additional short-term costs due to collateral calls" that require Puerto Rico not be rated as "junk," CNBC reported. Then in February of that year, Moody's downgraded the island's debt two rungs to "junk" status. That $1 billion came due and made the whole situation that much worse.

Of course, the situation is much more complicated than just what is laid out here. Local politicians are not perfect, just as they aren't in many American states that also face budget shortfalls. But it's clearly a lot more complicated in Puerto Rico's unique situation. So if Trump works to wipe it clean, the island could finally get a fresh start.