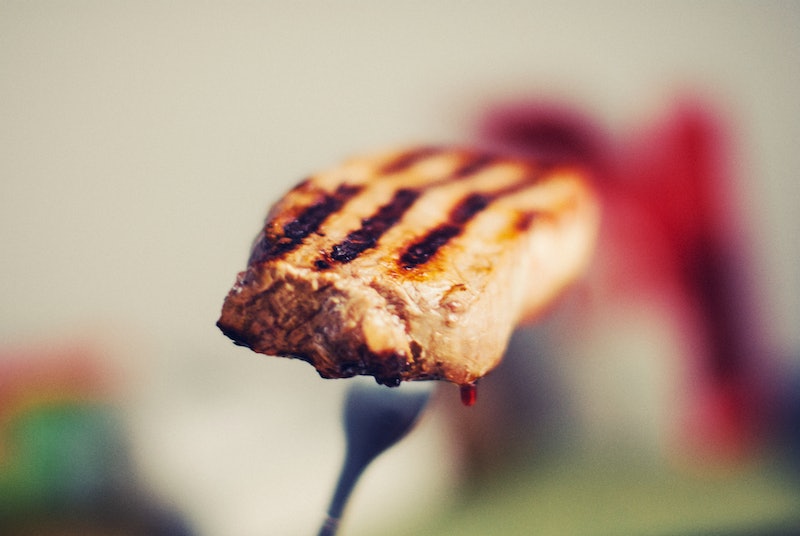 If you haven’t heard the name "Nusret Gökçe," you may better recognize the mysterious Turkish chef who handles his meat like a lover by his nickname, "Salt Bae." But how did Salt Bae get his name, exactly? Well, that’s just one of the many questions that remain unanswered about this viral foodie star. Though #saltbae memes only started trending last weekend, in his native Turkey, Gökçe has been a well-known fixture of the restaurant scene for quite some time.

The co-owner of a chain of six steakhouses throughout Turkey and Dubai named Nusr-Et (after himself, of course), Gökçe has been studiously growing his meat empire since he became a butcher's apprentice at the young age of 16. However, it was his strangely sensual Instagram videos that brought the meat lover worldwide attention and earned him the title "Salt Bae."

The internet love affair started Jan. 7, when Gökçe posted a video on his Instagram page showing him elegantly slicing an "Ottoman steak." He finished the 36-second long video off with flare, sprinkling a handful of salt crystals with such panache that they glittered like fairy dust as they careened off his elbow and onto the steaming meat. In just five days, the original video has been viewed nearly four million times and received over 20,000 comments.

Screengrabs of Gökçe sexy salting technique have been turned into widely-circulated memes, so we can assume the "salt" part of "salt bae" comes from this very moment. However, the hashtag seemed to appear out of the blue along with the pictures; so far, no one has stepped forward claiming they created the nickname. Twitter has dubbed #saltbae the first meme of 2017 and the over-the-top sprinkling of salt has come to symbolize being or doing something extra, or used as an emphatic mic-drop.

It should be noted that the internet finds the chef incredibly attractive. From his penchant for wearing a white T-shirt with a black vest, his smoldering glare frequently hidden behind round sunglasses, or his ponytail/goatee combo, it seems the man can do no wrong. This is a person who can slice a steak with precision as it hovers in mid-air, who lovingly massages cows, and who has an unexpectedly erotic technique for tenderizing a prime cut before it's thrown on the grill. As such, it shouldn't come as a surprise that all the internet wants him to be their bae.

Conversely, though, you might also consider the actual definition of "bae": Although it's often used as a noun meaning something like "babe," technically it's an acronym that stands for "before anyone else." So, directly translated, "Salt Bae" means "Salt Before Anyone Else." Perhaps it's a reference to Salt Bae's personal love of salt? We may never know, but I wouldn't rule it out as a possibility.

While Salt Bae continues to receive daily proclamations of love and offers of marriage on Twitter, you won't be finding Salt Bae on any menus. With as many as nine kids (also not a surprise), this bae has his plate full. I guess we'll just have to continue to appreciate him for what he is — a really tasty meme.