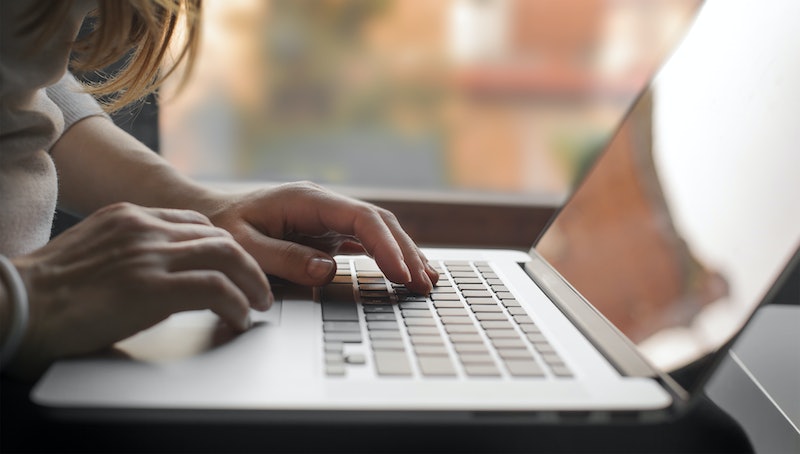 If you spend even a minimal amount of time online, you're familiar with the feeling of confusion and utter annoyance when you visit a website or social media platform and notice an unexplained update staring you in the face. They changed something? HOW DARE THEY? Such is the case right now with people who have noticed a blue Gmail icon instead of the typical red — an update that apparently happened sometime around January 26, according to HelloGiggles. If you yourself are eye-to-eye with a blue icon instead of red, despair not. There's a legitimate (and simple) explanation for it. BuzzFeed explains the icon has switched to blue for anyone using G Suite.

G Suite is the version of Gmail people use for corporate (business) accounts, or if they use Gmail with a custom domain, meaning your email address doesn't end in @gmail.com. If you work in an office that uses Gmail, you're probably using G Suite.

If you have both a personal account and a G Suite account, you can open the tabs in your internet browser and place them side by side, and you'll see the difference. I myself was shocked and perturbed when I noticed the change — although I must say the blue adds a pleasant touch to my browser window. Look at it, looking all cute and stuff.

The change is supposedly coming from Labs, a feature in Gmail that let's you customize the appearance of your inbox, says HelloGiggles. Within Labs, there's something called "unread message icon," and that's what's causing the change in color. You might also see the number of unread messages overlapping the icon. While it doesn't appear there's a way to go back to the red icon, you can remove the number of unread messages (although in my case, it looks like this feature was automatically turned off, so it might be the same for you). Simply go to your account settings, go to the Labs tab, scroll down to "unread message icon," disable, and save your changes. Boom! The number will disappear.

Google hasn't commented on whether this change is permanent or if they're just trying to mix things up. But either way, it's going to be OK.

Anytime updates happen, there's always a risk of confusion and even backlash — and even really bad backlash. Earlier in 2017, for instance, Skype went through an update and ended up looking more like Snapchat, according to some user reviews shared on BBC News. People called were unhappy with the update, and Skype's rating on the app store dropped.

Social media apps have been placed under similar scrutiny — see: every update on Instagram and Facebook, ever. When Instagram updated its news feed to show you posts it "thinks" you're interested in — as opposed to whatever people posted in the order they shared it — a lot of dedicated users were less than pleased.

Then there's Facebook, on its never-ending quest to keep up with Instagram and Snapchat. It went and added stories and live streaming which are sweet, but everyone simultaneously loathes having to watch ads in the middle of videos now. It's a love-hate relationship, really.

Twitter, the platform that's perhaps struggling the most to keep growing, is ironically the one that's had the best luck with their updates. We partied when they extended the character limit. We wept tears of joy when they introduced GIFs which you can tweet from right inside Twitter and IT'S AWESOME.

Generally speaking, though, people seem to like comfort and familiarity — and the new blue Gmail icon in G Suite was just too much for some of us to handle. Apparently, incorporating GIFs and adding stories is acceptable, but don't you dare change our favicon...