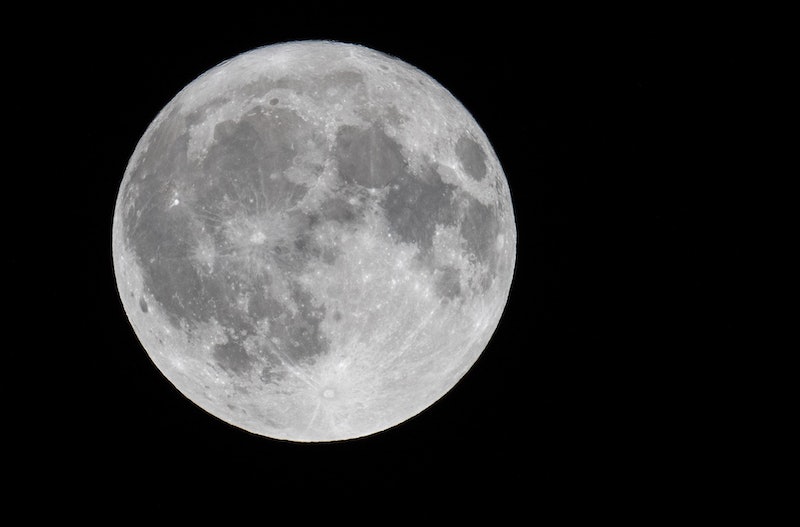 There's been a lot happening in space lately. OK, so I guess there's probably always a lot happening in space, but recently, there's been a lot happening up there that we here on Earth can actually see — and it's been pretty cool. You've probably already heard about the super blue blood moon that rose in the early morning hours of Jan. 31, but what you might not realize is that said cosmic phenomenon (which is really a mash-up of three individual phenomena: a supermoon, a blue moon, and a blood moon aka total lunar eclipse) is going to shake up the lunar schedule for February 2018 too. So why is there no full moon in February? Allow me to explain.

In order to really understand the absence of a February full moon, you first need to have a firm grasp on the definition of a blue moon, which we're (uniquely!) experiencing in both January and March of 2018. Prior to all this talk of the super blue blood moon, I thought that "blue moon" was just a funny part of the expression used to describe something that happens very rarely — "it's once in a blue moon!" — so I understand if you need the background too.

According to Time and Date, a blue moon is what we call the second of two full moons to rise within the same calendar month. Usually, we experience 12 full moons over a 12-month period — one per month — and a blue moon constitutes the 13th. The first full moon of 2018 rose on Jan. 1, which means that when the second one rose on Jan. 31, we had ourselves a blue moon. And while blue moons aren't totally routine (there is some logic to the "once in a blue moon" saying), they do happen approximately once every two or three years, per Time and Date.

What's even more rare is a year with two blue moons... but that's what we're working with in 2018. The second blue moon of the year will rise on Mar. 31, per EarthSky. This is a blue moon because it's the second of two full moons that we'll experience in March (we'll see the first on Mar. 1). The last time we saw two blue moons in a single year was 1999, and it won't happen again until 2037. Talk about once in a blue moon, amirite?

All of this should help explain the fact that there won't even be a single blue moon in February 2018. Because it's so short, February is the only calendar month when it's possible for no full moon to take place, according to EarthSky. Instead, we'll get two in both January and March, which are, of course, longer months. A calendar year only embraces two blue moons if there are still just 13 full moons over the course of the 12-month period. With February's full moon a non-issue this year, the January and March blue moons fit the bill!

What's especially interesting — especially for the math-minded among us — is that there's a clear pattern to all of this. Back in 1999 (again, the last occurrence of two blue moons in a single year), all of these dates were the same as the ones we're talking about for 2018 — there were blue moons on Jan. 31 and Mar. 31, and no full moon at all in February. The same will be true when all of this happens again in 2037. Per EarthSky, "in periods of 19 years, the phases of the moon fall on or near the same calendar dates because 19 calendar years are nearly commensurate with 235 lunar months," or 235 lunar cycles that ultimately return to full moons.

Basically, if you're missing a glimpse of the full moon in February 2018, don't worry! You'll have your fill (pun intended!) for the year.