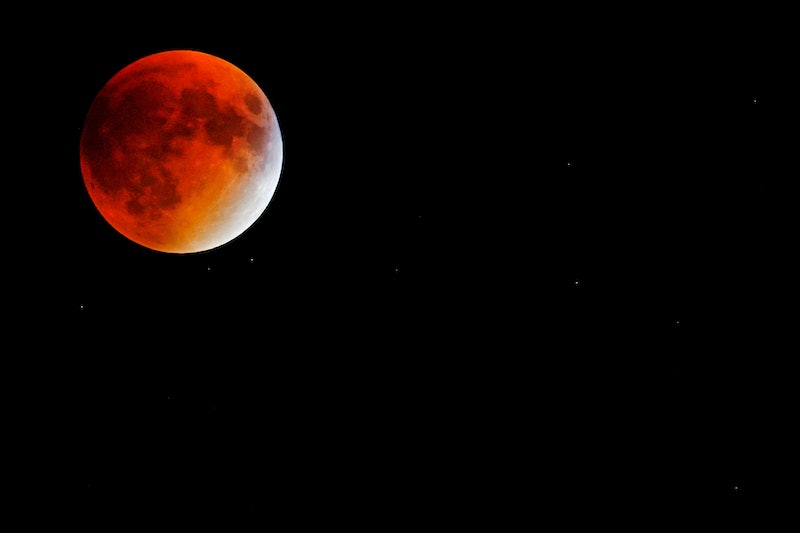 Growing up, I remember being overwhelmingly excited whenever I found out a blue moon was set to happen soon. I knew deep down that, in actuality, looking at a blue moon is no different than looking at a full moon — but I didn't care. I loved the idea that something unique and exciting was taking place up in the sky, so every time a blue moon occurred, I was outside to see it in full force. The same was true for when I'd discover a super moon was occurring soon. While these two lunar events are exciting on their own, the idea of them happening at the same time is thrilling — both to my inner child and my adult self. And on Jan. 31, that's exactly what's happening: a blue moon and a super moon are occuring at the same time. So, what does it mean if the blue moon is a super moon?

A blue moon and a super moon both take place when there is a full moon. A super moon can also happen with a new moon, but it is not visible from Earth. Let's breakdown what each of these lunar events are, starting with what causes a blue moon to occur. According to NASA, the name blue moon was originally given to the third full moon occurring in a season with four full moons. However, in recent years, the name has been adapted and today is most commonly used as the name for the second full moon appearing within one calendar month. So, no, the moon doesn't turn blue, but it's still a pretty cool phenomenon. While a blue moon regularly occurs about every two and a half years, 2018 will see another blue moon at the end of March.

So, how does a super moon occur? Taking place on average four to six times a year, a supermoon happens due to the moon's elliptical rotation around Earth. In order for a moon to be considered super, a full moon must happen when the moon is at least 90 percent of the way to it's closest distance to Earth along it's rotation. That means that the moon has to be at farthest 226,000 miles away from Earth. Due to the elliptical shape, one side of the moon's rotation, perigee, is 30,000 miles closer to Earth than the other side, apogee. If a full moon occurs when the moon is in perigee, it's considered a supermoon. The moon will appear brighter and larger to varying degrees, based on where in perigee it is. NASA reports that the Jan. 31 supermoon will be 14 percent brighter and 7 percent larger than a traditional full moon.

This super moon is also of significant because it is the third super moon to occur in a row. Both the Dec. 3, 2017 and the New Year's Day full moons were also super moons — so, the Jan. 31 super moon makes three. The last time this happened was during the summer of 2014.

So, what does this all mean? Basically, when a blue moon and super moon coincide, the blue moon will appear bigger and brighter than it would have been otherwise. It's all the more reason to step outside and take in the wonders of space.

It's worth noting that the blue moon and super moon aren't the only lunar events taking place on the last day of January. Coinciding for the first time in over 150 years, a blue moon, super moon, and a total lunar eclipse will all be taking place. A total lunar eclipse happens when the Earth goes directly between the sun and the moon, completely immersing the moon in it's shadow. Unlike a solar eclipse, a lunar eclipse has a much wider scope of visibility, allowing anyone in darkness to witness it.

Take a step outside on Jan. 31 and catch a glimpse of this one in a lifetime event. Just like when I was a kid, you can bet I'll be running out to see.