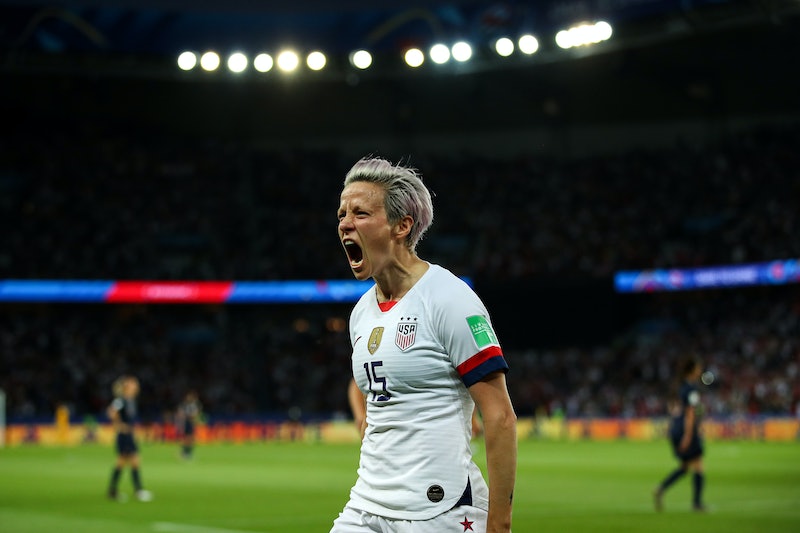 More than anyone else, Megan Rapinoe has become the face of her U.S. Women's National Team in the World Cup this year. Like Mia Hamm or Abby Wambach, Rapinoe is one of the names that even the least invested fans certainly know — she's both scored a number of very important goals and argued with President Trump during the tournament. But in a surprise twist, the midfielder won't be starting for the team's semifinal game on Tuesday. Before you get worried, though, there's a good reason why Megan Rapinoe isn't starting against England.

UPDATE: In a post-game interview when asked if she was injured, Rapinoe confirmed she had a "minor strain" and said she would be ready in time for the finals.

EARLIER: When U.S. Soccer released the lineup for Tuesday's semifinal game, people immediately noticed that winger Christen Press would be starting in Rapinoe's place. After Rapinoe scored the USWNT's only two goals in their victorious quarterfinal game against host nation France — in addition to two goals the previous game — it might seem odd to the casual observer that Rapinoe won't immediately have the chance to continue her streak. There are a couple of potential reasons why this could be the case, though, and one of them comes down to the matchup.

"As good as Pinoe is, she doesn't contribute a lot defensively," SB Nation women's soccer writer Kim McCauley tweeted on Tuesday. "Christen Press is the fastest and fittest player on the USWNT. England RB Lucy Bronze has been the best player at this tournament."

Basically, as Deadspin explained, England has a two dominant players who play on the right: Nikita Parris and Lucy Bronze. Rapinoe plays on the left, so she would be going directly against this pair — but she's not the greatest defensive player, and she would have to be essentially the first line of defense against a couple of dangerous scoring threats. Press, according to Deadspin, is better suited for this important job — and she's proved she can score in the past. In fact, according to U.S. Soccer, she ranks 11th on the list of most goals scored in USWNT history.

Alternatively, some commentators have suggested that Rapinoe could be injured, since, as The New York Post wrote, she didn't even warm up before the game. According to LA Times sportswriter Kevin Baxter, a spokesperson for the USWNT wouldn't definitively say why Rapinoe wasn't playing.

There was some speculation that Rapinoe's benching was a disciplinary matter, after President Donald Trump criticized her for saying in a video that she was "not going to the f*cking White House" even if the team did receive an invitation. According to Yahoo sports writer Dan Wetzel, though, a U.S. Soccer spokesperson announced that it was "not a disciplinary decision."

“We all support Megan; she knows that,” USWNT Coach Jill Ellis said at a press conference last week, according to The New York Times. “We know we have each other’s back in there.”

The semifinal game between the United States and England promises to be a good one, played as it is between two of the best teams in the world, according to The Washington Post. Both teams are extraordinarily deep, and, of course, they're both coming off a string of big wins. The last time the two teams played, it ended in a 2-2 draw, according to The Post. It'll likely be a tight game — and since Rapinoe is listed as a substitute, the team could always pull her in if they need a little boost.