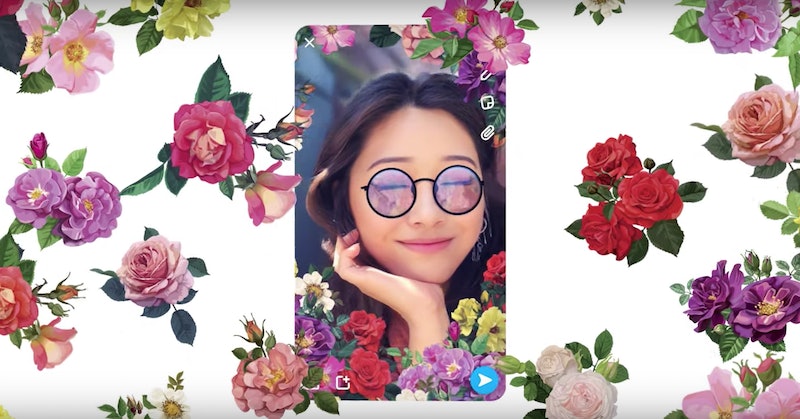 If you thought you'd taken the ultimate selfie before, think again. On Sept. 17, Snapchat dropped a new filter called "3D Camera Mode" that lets you take selfies in what looks like, you guessed it — 3D. This mode allows users to add depth to their pictures, in the way a three-dimensional picture would. It also allows recipients to see your Snap from different angles and perspectives. And although the release is extremely new, if the Snapchat 3D Camera Mode isn't working for you, it could be because of a minute, but important detail.

If your friend sent you a 3D Snap and you see that you can't send one back just like it, it's probably because the camera mode requires an iPhone X or newer in order to work. In other words, the feature is only available on phones that use Face ID technology, which allows the phone to create a depth map of your face, according to Apple. If you have an iPhone X or newer and the feature still isn't showing up, you might have to update your Snapchat so you have the newest version.

Then, the 3D Camera Mode can be easily found on the right-hand side of your screen, as shown by a YouTube video Snapchat posted. If you click on the drop-down arrow and select "3D" you'll be able to swiftly start taking and decorating your 3D pictures. Any device can receive the Snaps and look at them from every angle, according to a Snapchat spokesperson, but if you want to take 3D photos yourself, you'll need a newer phone. And while a Snapchat spokesperson told Mashable that the app is working on bringing this feature to other devices, for now you'll just have to hold tight.

If you don't have an iPhone X or newer and are wondering what all the fuss behind this new feature is, the new 3D Camera Mode takes your selfies to the next level. Aside from giving your photo the perception of being three-dimensional, the 3D Camera Mode lets you add superimposing frames, accessories, and captions that contribute to the multi-dimensional effects of the picture. It all stems from the iPhone's recent TrueDepth features in its newer iPhones. Snapchat uses these features along with its app in order to create "a mini diorama" of whatever image you capture. This, according to a Snapchat spokesperson, is part of the app's efforts to increase interaction and expression among its users.

The release of the 3D Camera Mode is part of Snapchat's new rollouts of effects and products, including the upcoming Spectacles 3. These new Snapchat glasses will allow users to record videos in 3D while wearing them, the same way they can with the front-facing camera of their iPhone X or newer, according to Endadget. And the glasses are more inconspicuous than the earlier version because of their design, according to Engadget, and even allow for a whole minute of recording time where you can add special effects to all of the things you see through the lenses.

But while the 3D Camera Mode might be super fun for those who can use it, if you save your 3D picture and post it on another platform, it won't retain its 3D capabilities, according to The Verge. It's possible that's meant to encourage users to stick with using Snapchat as both a messaging app and social media platform. Either way, the new 3D Camera Mode is a pretty cool addition.