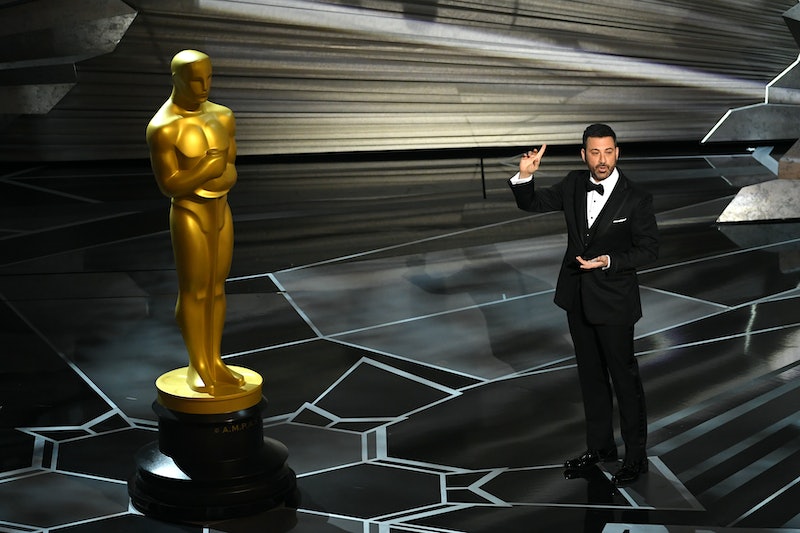 With the Oscars just days away, you're probably trying to watch as many nominated films as possible. And while it promises to be an interesting awards ceremony, to say the least, it hasn't exactly been a smooth walk to the stage. Although this awards season has been rife with controversy, the most prominent reason is that there will be no Oscars host this year. Why, you ask? Well, settle in — it's a bit of a long story.

Kevin Hart was announced as this year's Oscars host on Dec. 4, 2018. However, just two days later, the comedian stepped down from the position, after old, homophobic tweets resurfaced. The Ride Along actor first posted a video on Instagram on Dec. 6 in response to the backlash. "Guys, I'm almost 40 years old," he said. "If you don't believe that people change, grow, evolve as they get older, I don't know what to tell you. If you want to hold people in a position where they always have to justify or explain their pasts, then do you. I'm the wrong guy, man."

In another Instagram video, the comedian explained that he'd gotten a call from the Academy asking him to apologize, but he decided to forego it, since he said he's addressed the controversy in the past.

However, Hart tweeted a more explicit apology the next day, in which he announced that he would be stepping down as Oscars host. "I do not want to be a distraction on a night that should be celebrated by so many amazing talented artists," he wrote, in part. "I sincerely apologize to the LGBTQ community for my insensitive words from my past."

Next, on Jan. 4, 2019, Hart appeared on The Ellen DeGeneres Show, where the TV personality asked him to reconsider hosting. DeGeneres said that she called the Academy and asked them to rehire Hart, but the comedian refused again. However, Variety reported that the Academy was upset with the way DeGeneres described her phone call, and an unnamed source claimed it was taken out of context. And despite DeGeneres' attempts to convince Hart otherwise, the Night School actor reiterated his decision not to host on Good Morning America a few days later.

As a result, Twitter began several grassroots campaigns for their own host picks (the one that gained the most traction was perhaps Vulture editor Hunter Harris's ongoing joke to host the event herself). Furthermore, The Rock claimed on Twitter that he was the Academy's first choice for host, but they couldn't make it work while he was filming the Jumanji sequel. (Bustle reached out to the Oscars for comment, but has yet to receive a response.)

Still, the speculation continued. In a video for Variety, Olivia Colman joked that her mom should host the ceremony, while Barry Jenkins mentioned Oprah. Glenn Close lobbied for Jeff Goldblum, and while Melissa McCarthy's name has come up as an option, the Can You Ever Forgive Me? actor claimed that she would do a terrible job. Furthermore, IndieWire suggested celebrities like Awkwafina, Kate McKinnon and Kumail Nanjiani (as a duo), and Will Smith, among others. Then, the Guardian mentioned rumors that Whoopi Goldberg might be secretly hosting, but that theory doesn't hold much water.

Finally, Variety reported on Jan. 9 that, for the first time in almost 30 years, the Academy would forego an Oscars host altogether. As an alternative, the awards ceremony would enlist several celebrities to introduce segments throughout the night. According to Vox, the last host-less Oscars was in 1989, which still lives in infamy.

The 61st Academy Awards featured a lengthy musical number, produced by Allan Carr and arranged/composed by Marvin Hamlisch, per the Hollywood Reporter. A little-known actor named Eileen Bowman played Snow White alongside a 24-year-old Rob Lowe as Prince Charming. "The show itself looked like a gay bar mitzvah," Bowman told the publication in 2013. "Middle America must have been like: 'What is going on? There are dancing tables, there's Snow White singing with Rob Lowe, there's Merv Griffin with people with coconuts on their head!'"

As a result, Carr's career was essentially over, per another THR piece, and celebrities like Julie Andrews, Billy Wilder, Gregory Peck, and John Newman signed an open letter to Carr, in which they expressed what an embarrassment the musical number had been. "It is neither fitting nor acceptable that the best work in motion pictures be acknowledged in such a demeaning fashion," they wrote, in part. According to THR, Disney also sued the Academy, who had used the copyrighted character without permission. However, the Associated Press reported that Disney dropped the suit in April 1989 after the Academy apologized.

While the night was a disaster, this doesn't necessarily mean history will repeat itself on Sunday. The awards ceremony still promises to be exciting, with films like The Favourite, Black Panther, and Roma nominated for Best Picture, and Regina King and Amy Adams both up for Best Actress for If Beale Street Could Talk and Vice, respectively. So as long as Lady Gaga and Bradley Cooper perform "Shallow" (which they are) and everyone avoids any bizarre, campy musical numbers, the show will go on — with or without a host.